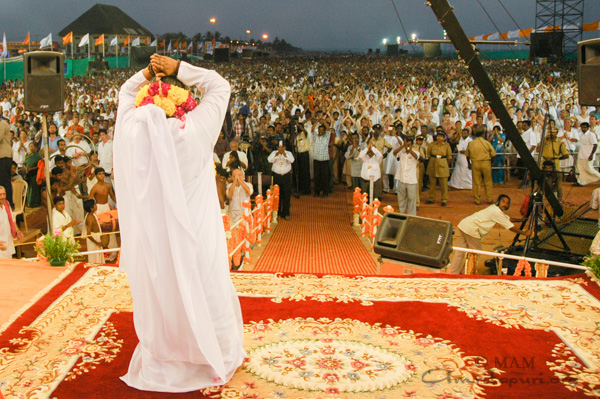 The waves were breaking just 50 feet from where Amma was giving darshan. Fishermen were hauling in their catches during bhajans. And the salty ocean air blew across the 40,000 people assembled for Amma’s program in Trivandrum all night long.

In fact it was Amma’s idea to hold the 2007 Trivandrum program in Sanka Mukham, a stretch of beach right near the international airport—a location famous for the annual ritual bathing of the Vishnu idol from the area’s ancient Padmanabhan Swami Temple.

Amma was welcomed by Gauri Lakshmi Bai, the Princess of Tranvancore, who mentioned how the land was considered sacred. “This is the place where Sri Padmanabhan takes the arattu [ritual bathing],” she said. The sweetness of motherhood, the bliss of peace, the spiritual consciousness, Oh, Mother, we welcome you.”

Amma began her satsang talking briefly about Padmanabhan—Lord Vishnu depicted reclining on Ananta Sayana, the serpent who is his eternal companion and resting place. “Talking about Padmanabhan is like talking about sugar,” Amma said. “It is sweet all around. He is lying down not to sleep, but to awaken you.”

In his talk, Veerendra Kumar said, “In a world of violence and terror, Amma has come whispering the mantra of peace and love. This is a moment for all of us to introspect. This will help us to learn about our mind. It cannot be expressed in words. It has to be experienced. Just like the bliss of the Self, it is beyond words. Wherever blessings, peace and help are needed, Amma comes. When the tsunami came, many were lost. Those who survived needed peace and consolation. What the government was not able to do, what the organizations were not able to do, Amma did—she reached out with a great peace and protection.”

Veerendra Kumar also took pride in Amma’s use of Malayalam. “At the UN—through Malayalam, with simple words—Amma opened a great vision of the world. Only Amma was able to do it. Wherever Amma goes, she only speaks in her language. Her words are not some complicated puzzle; they are like those of a mother talking to her children. Those words are the keys to the Self. Amma’s love reach into hearts, into lives, into families.”

Veerendra Kumar helped Amma distribute pension checks to new enrolees in the Ashram’s Amrita Nidhi Pension Project. These were representative of 1,000 new pensioners in the Trivandrum area. Sewing machines were also given to 100 impoverished women by Gauri Lakshmi Bai.