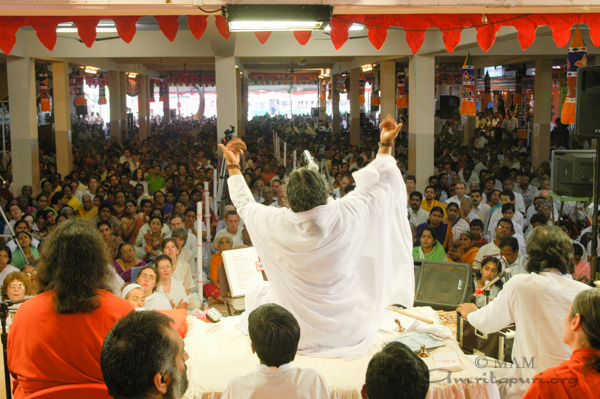 The world-famous violinist A. Kanya Kumari has played for Mata Amritanandamayi Devi in Chennai for the past four or five years now. Her white-painted violin cradled in the crook of her arm in the style of Karnatic violinists, she sits unassumingly somewhere on the back of the stage as Amma gives darshan. As she traverses the beats of K.V. Prasad’s mrdangam, her violin weeps one moment and dances the next. Her ability to express the longing of the human heart through sound is simply beyond words.

Watching Amma give darshan to the music of Kanya Kumari is like watching a sad and beautiful silent film for which the violinist is providing the score. As the people come in and out of Amma’s arms—the affluent and thriving, the sick and broken, the meditative and blissful—it all seems reflected in the violinist’s music. In fact, the music is a lot like Amma’s life—flowing around and over and through the various situations put before it.

Chennai {shtalapurana } is a centre for Karnatic music concerts, the classical music of southern India. As such, when Amma is in the city many musicians come for Amma’s darshan. This year brought renowned Karnatic singer T.N. Seshagopal and the pride of Kerala, K.S. Chitra. And Amma’s program in Shenoy Nagar, Chennai, on the 27th featured a performance by Sitarist Shivaramakrishna Rao and veena virtuoso Rajesh Vaidya.

Lalgudi G. Jayram, one of the all-time masters of Karnatic violin, also came to be blessed by Amma during her Brahmasthanam program on the 29th. His son, Lalgudi G.R.J. Krishnan, performed for Amma in the evening as well as a female veena player who is his disciple. Lalgudi’s son was accompanied by Gopalakrishnan on ghatam [clay pot]. One could see the bliss of the music reflected on Amma’s face as they played. As she gave darshan, Amma seemed to be savoring each note of the ragas being offered to her.

Lalgudi has had Amma’s darshan several times in the past and, he even performed for Amma in Amritapuri{news}. After that performance, he said, “Of all the concerts in my 65 years of performing, this was a different experience—today I completely forgot myself. Occasionally, when I play, forgetting myself happens, but never like today. Today it was especially magnificent. First we must forget ourselves, then the music naturally comes. When I play, I only want to offer it to God.”

In fact, Kanya Kumari was playing when Lalgudi Jayram took Amma’s darshan today in Chennai. Jayram was then led onto the ashram’s small dais to sit for some time in Amma’s presence. When the master walked near Kanya Kumari, she pranamed lightly to him, and then, when she finished the song, she got up, walked over to him and touched his feet. 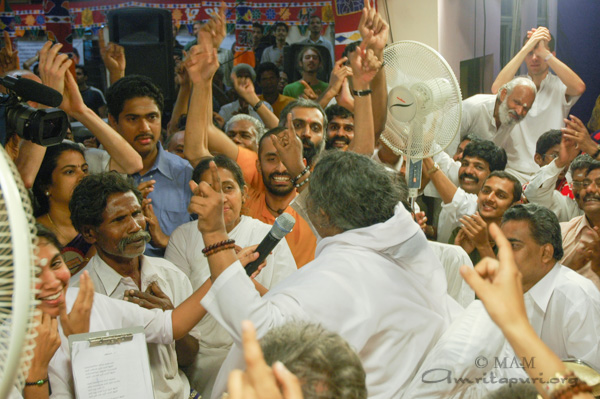 At the end of darshan—around 6 a.m. on the 30th—Amma decided to provide her own darshan soundtrack. As she took the devotees one after another into her arms, she sang out in full joy—”Ramakrishna Govinda,” “Mata Rani” and “Lalitamba.” Amma was almost dancing as she sang, swaying to the rhythm and occasionally pointing with her index fingers up to the sky. As Lalgudi Jayram once said about Amma’s singing, “Most people usually sing for others’ applause, but we feel that Amma is singing to the Divine within Herself and also to each one of us personally.”

According to the Vedas, sound is the subtlest of the five senses. Therefore, its beauties are the deepest. But as proved in Emperor Akbar’s court1—and conversely in Amma’s Chennai ashram—the sweetness of music performed in devotion to God and offered at the feet of the mahatmas is unparalleled.

1 Akbar, the 16th century Mughal emperor, was a connoisseur of classical music. Learning that Tansen was the greatest living singer, he ordered him to come perform in his court. A devotee of the Lord, Tansen was not interested in singing for the emperor. But as the emperor was commanding him to come, he had to coalesce. But when Tansen sang for Akbar, the emperor was not so impressed. He asked Tansen why his singing had been so mediocre. Tansen replied, “Normally, I sing for God. But today I sang for you.”