The city of the Peacock 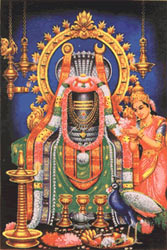 One of the most famous temples in Chennai is the Kapaleswarar Temple1, located in an area that is today referred to as Mylapore. In fact, Mylapore is an Anglicized form of “Mayilapur,” which literally means “City of the Peacock.”2

In the Puranas, Lord Shiva is the guru of his divine consort, Parvati Devi. The legend says that once when Shiva was imparting wisdom to Goddess Parvati, she became distracted by a beautiful peacock. Shiva then cursed her to take birth as a peahen, telling her that he would join her after she worshipped him in the form of a Shiva Lingam3under a Punnai tree. After many years of searching, the peahen finally found such a Shiva Lingam in Mylapore (Southern Chennai). She then worshipped her Lord in this form, offering him flowers that she carried in her beak. Fulfilling his promise, the Lord then appeared Parvati and reunited with her.

The story shows how when we become enamored with the objects of this world (the peacock) and forget their divine essence (Shiva), we remove our self, as it were, from God. But as soon as we remember the divinity inherent in the world and its objects, we are immediately reunited with the Supreme.

There is another story associated with this temple, this one involving the Shaivite Saint Tiru Jnanasambandar Nayanar4. 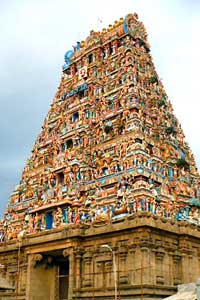 The story goes that one day a girl by the name of Poompavai was gathering flowers in a garden for the daily worship when she was bitten by a poisonous snake and died. Her father, a merchant named Shivanesan Chettiar, had deep faith in Tiru Jnanasambandar.

After her cremation, Shivanesan Chettiar placed his daughter’s ashes in a pot with the firm conviction that the saint would resurrect her when he came to through the area in the near future. Indeed, when Tiru Jnanasambandar to the Kapaleswarar Temple, Shivanesan Chettiar approached him with his daughter’s ashes. Hearing the man’s sad tale, Tiru Jnanasambandar heart overflowed with compassion. He then broke out in a spontaneous 10-versed hymn in praise of Shiva in the form of Kapaleswarar5. When he reached the final verse, Poompavai emerged from the pot alive and well.

Tiru Jnanasambandar did not cast even a glance at Poompavai, the beautiful young lady he had brought back to life. Instead, he attributed the miracle to the grace of Lord Shiva, claiming no responsibility of his own. Shivanesan Chettiar offered Poompavai’s hand in marriage to the saint, but he gently declined and continued on his pilgrimage.

It is also said the Sri Rama stopped at the Kapaleswarar Temple on his way back from Lanka.

1 Kapaleswarar (kapala + iswara) literally means “The Lord with the skull-bowl.” Here, Shiva is depicted standing with an ascetic’s bowl in the form of a skull in his hand. The skull is supposed that of the fifth head of Lord Brahma. Shiva is said to have plucked off Brahma’s fifth head after feeling him to be arrogant. Brahma represents the creation principle, and Shiva represents destruction. The story symbolizes how everything that is created must one day be destroyed. Furthermore, Shiva’s kapalam represents how the universe at end of a cosmic cycle is resolved into seed form. Then, from this kapalam, eventually springs forth the next creation.

2 In Brahmanda Purana, circa 3000 BC, Mylapore is mentioned as “Mayurapuri.”

4 Tiru Jnanasambandar was on of the primary four of the 63 Nayanars, the Shaivite saints of Tamil Nadu. He is said to have lived around 650 CE.