Not only did the Chief Minister of Gujarat, Sri. Narendra Modi, come to the Amrita Vidyalayam in Amdavad to seek Amma’s audience, he also rode beside Amma to the programme site at Education Society Grounds. There, young men and women dressed in traditional Gujarati clothing were dancing dandiya to welcome Amma. The dancers used the sticks associated with the dance to form an archway for Amma to walk under on her way to the stage, and the CM passed under it along with her. 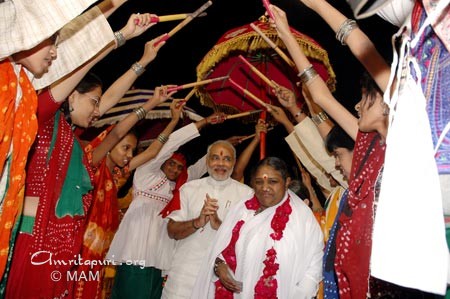 Addressing the crowd, the CM said, “The life-force of India lies in spirituality. Without spirituality we cannot even dream of India. This spirituality has been passed down for ages and ages through India’s parampara [lineage] of rishis, acharyas, saints and mahatmas. It is this parampara that constantly refreshes and inspires the human mind of India, and it is because of this parampara that—in spite of so much opposition, obstacles and difficulties—God’s will wins.”

Modi then lamented the fact that many Indians seem to be ashamed of the country’s spiritual heritage. He also lamented that many Indians seem to believe the only people serving society are missionaries and those working in the social services. As proof to the contrary, he put forth the example of everything Amma’s Ashram is doing, including its rebuilding of three Gujarat villages following the Bhuj earthquake of 2001. “But this is not missionary work, nor is it social service,” he said. “It is simply to uplift the suffering. Her work is compassion in the true sense of the word. Is she not the Mother of Compassion?”

Modi continued: “It has been the tradition of this country to help the poor, to wipe the tears of the suffering. It is the tradition of this country that nobody should go to bed without food. To insure this does not happen, we have the tradition of providing free food in temples. I don’t understand why we are not proud to display this tradition before the world. Why are we ashamed of it? In fact, we should bang a drum so that the entire world knows the glories of our mahatmas—our embodiments of seva and spirituality, our embodiments of compassion and love, who have realized the meaning of vasudaiva kutumbakam [the world is one family]. We should be proud to show this tradition of ours to the world. That we do not is truly a tragedy of the country. … In the face of such warped situations, people like Amma, who are wedded to the parampara, are trying to rejuvenate this nation on the foundation of love, compassion and spirituality, without feelings of hatred towards anyone, without leaving the path of Truth.”

The CM concluded by welcoming Amma to Gujarat: “I offer my pranams at the feet of Amma and her spiritual strength, compassion for society and her motherly sankalpa [resolve] for the benefit of the world. May she give all of us the inspiration and strength to do something good with faith.” 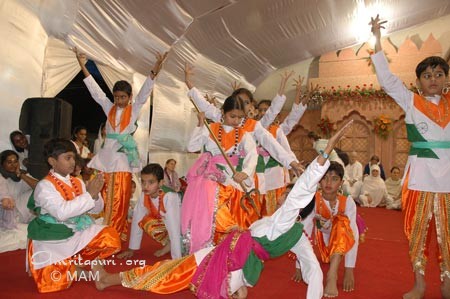 Modi then helped distribute certificates of enrolment to 14 new beneficiaries of the Amrita Nidhi pension programme. The programme has been extended to 1,000 more widows and handicapped people in the Amdavad area. He also released a Gujarati translation of Satya Sanatana, a book of Amma’s teachings.

At the conclusion of darshan Amma travelled on to the next programme in her Bharata Yatra, Indore, Madhya Pradesh.