When Amma came to Pandit Dindayal Upadhaya Indoor Stadium in Surat, she was greeted by eight young women performing garbhi, Gujarat’s traditional dance for the Divine Mother. The dance was not limited to Amma’s immediate arrival, the women danced alongside Amma as she walked into the stadium. Traditionally performed during the nine nights of Navaratri, the dance is said to be Devi’s favourite. 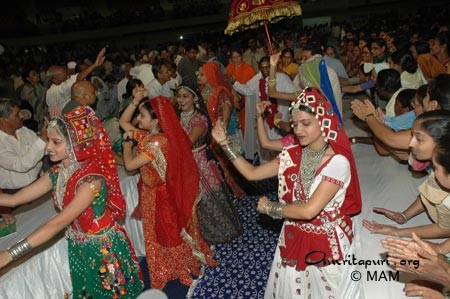 Amma was officially welcomed to the city by the Mayor, Sri. Kanudhai Mamani. Speaking from the dais, the mayor said: “Amma’s darshan has uplifted many of the world’s poorest of the poor. By her grace, the poorest people in the world are relieved of their worries. Through her educational work and philanthropic activities, Amma is uplifting the poorest people in the world, providing them with the basic necessities of food, shelter and clothing. We should bow down and touch her lotus feet.

Amrita nidhi pension to the destitute 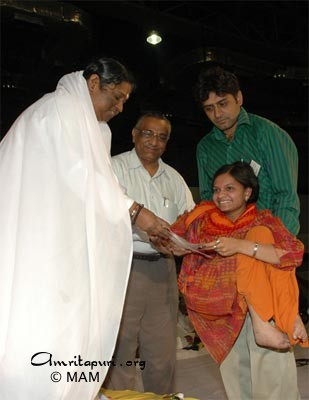 The mayor then helped Amma distribute certificates of enrolment to more than a dozen new beneficiaries of the Ashram’s Amrita Nidhi lifetime free pension programme. This was symbolic of how the programme has been extended to an additional 1000 beneficiaries in the Karwar area. The enrollees were also presented with their first three-month pension payments.

To the delight of the Surat devotees, Amma sang a number of bhajans in Gujarati, including a version of “Jinki Karuna He Apar.”

When Amma began giving darshan, 11 girls performed dandiya, the traditional dance of the gopis of Vrindavan, involving the rhythmic striking of sticks. The music was a little modernized from that of Krishna’s day and some of the steps had a little more attitude, but it was a wonderful welcome to Gujarat, the land of Sri Krishna, nonetheless.