The President of India, Dr. A.P.J. Abdul Kalam, came to Amritapuri in order to inaugurate Amrita Setu, the bridge the Ashram has constructed connecting the island of Alappad Panchayat to Vallikkavu. The bridge was constructed with the aim of providing a centralized escape route via which 15,000 people could evacuate in 30 minutes should Alappad face another natural disaster in the future. It was the third time that the President has come to the Ashram, the second since taking office in 2002. 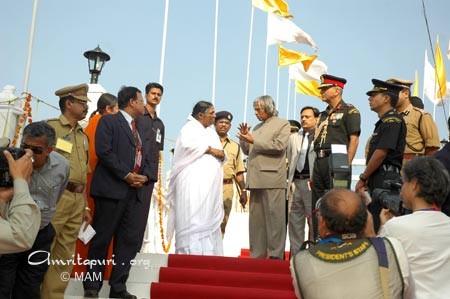 The President arrived at 3:15 pm at the location of Amrita Setu, where he with Amma unveiled a plaque commemorating the occasion. The President then started to climb up to the top of the bridge, but when he saw Amma coming up with him, he stopped and came back down. Later, while addressing the gathering, President Kalam said that he’d wanted to climb to the top but, as he did not want to trouble Amma, he had turned around.

After a private talk with Amma, the President took the dais. He was joined by Amma and Sri. C. Divakaran, Kerala’s Minister for Food & Civil Services, and Sri. S. Sharma, the Minister of Fisheries and Harbour Engineering.

Swami Amritaswarupananda delivered the welcoming speech, recounting the day of the tsunami and detailing the Ashram’s 100-crore relief-and-rehabilitation project. “With full confidence,” he said. “I can say that no one in the world has done as much for the tsunami-affected of India as Amma.”

Swami also explained how Amma had first told him that the Ashram should build an evacuation bridge after witnessing the confusion, over-crowded boats and the amount of time involved in two false “tsunami alerts.” “Amrita Setu is Amma’s love in rock-solid form—a symbol of the compassion and selflessness she embodies” Swami continued.

Welcoming the President, he said “This country has had so many presidents since Independence and all have done good things, but President Dr. A.P.J. Abdul Kalam is very special—because he is such a great lover of Bharat. He loves this country, and he loves her culture. He is a great visionary—one with only one dream: making India the most powerful country in the world. Even the money he gets each month he gives in charity. Indeed, Your Excellency, it is an honour to have you among us.”

It was Amma who spoke next {read message}. Amma said that, in her heart, she could still clearly see the faces and hear the sounds of those who lost their near and dear ones to the tsunami. She then prayed that such a tragedy never takes place again anywhere in the world. Amma said that unfortunately when she sees mankind continuing to selfishly exploit Mother Nature, she is filled with fear. “If we continue to torture [Mother Nature], it will only lead to our own destruction,” Amma said. “If human beings show hesitancy in changing, Mother Nature will make us change. This is the message behind Mother Nature’s retaliations.” 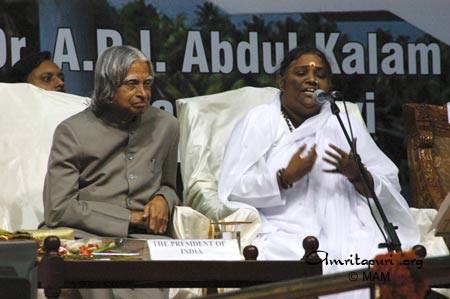 Amma also spoke of Amrita Setu as a symbol of the power of love and unity to bring human beings together, and urged the citizens of Alappad and the citizens of Vallikkavu to forget their differences. “It is the nature of rivers to ever flow in one direction. But the flow of love is not like that. Love flows both ways, embracing one and all. With this bridge, Amma expects the notion, ‘I am from this shore and you are from that shore,’ and all the sense of difference originating from it, to come to an end.”

Amma ended her talk by praying that may India is able to use the talents and knowledge of President Kalam in the best way possible.

After quick talks by the two ministers, the President himself stepped up to the podium. {read full speech}  He began by speculating on what was so unique about Amritapuri. “When an environment is beautiful, it creates beautiful minds. When beautiful minds are there, they give creativity. And the creativity leads to many, many wonders” said Dr. Kalam.

President Kalam said that Amrita Setu reminded him of how in his childhood home, Rameshwaram, Rama had built a bridge to Sri Lanka thousands of years ago. “I am sure that Amrita Setu will also go into history,” he said.

The President then said that he would look to work with Amma to create a Coastal PURA in Alappad. PURA (Providing Urban facilities in Rural Areas) is the President’s program for empowering villages.

The President said that he understood Alappad’s need for a bridge, as he had faced many cyclones growing up in Rameshwaram. He also said that it was essential for people living close to the sea to have a proper warning system with regard to severe weather conditions.

The President concluded by saying that he would take with him from Amritapuri the message of giving. “Give and go on giving,” he said. “That is the message I get from Amritapuri. There is no greater message than Amma giving to all the people of this region, and Kerala, and India, and for the world.”

Amma then presented stipends to village ferrymen, and Swami Amritaswarupananda presented President Kalam with a memento to commemorate the occasion.