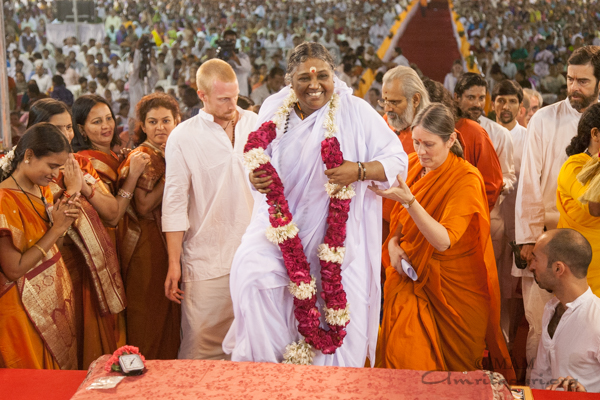 Sri. Narendra Modi, the chief minister of Gujarat, was the chief dignitary at Amma’s program in Ahmadabad. In his address, he requested Amma to establish the second headquarters of the Mata Amritanandamayi Math in Gujarat, invoking Sri Adi Sankaracarya’s establishment of ashrams in the four corners of India as precedent. 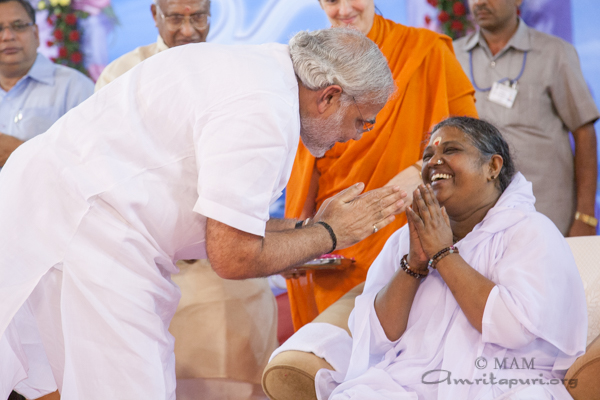 “When I look back at history, today’s situation in India gives me assurance, a ray of hope that fills me with enthusiasm. In India today, a new period of spirituality has begun. You switch on the TV in the morning and you find a spiritual person giving a discourse, addressing a gathering of thousands and lakhs. Another joyful thing is that the youth of India are taking part in this spiritual resurgence. This reminds me of the 19th century. There was a spiritual revolution then. The sages, the mahatmas, the poets, storywriters and singers created a spiritual revolution. It was this fervour that helped in the Freedom Struggle. Without it, India never would have attained Independence.

“The saints, the scientists and everyone are proclaiming with one voice that the 21st century will belong to Asia, particularly India. I feel it’s true because I can see that the spiritual leaders are preparing the foundation for the same strong resurgence. For this, Amma is making a major contribution. It feels great when this Ganga of spiritual fervour flows into Gujarat and touches the Gujarat soil. And for this, time and again I welcome Amma to Gujarat.

“Your headquarters are in Kerala. It’s not right for the devotees of Gujarat. Sri Sankara was also from Kerala. He established four ashrams around India. He tried to awaken the spiritual consciousness throughout the vast country of Bharat. Amma, can you make your second headquarters here in Gujarat? Gujarat is inviting you. Sri Krishna has also come here. I am sure that Amma will accept.

“This land calls all those with a spiritual inclination. My full faith is that Amma will make her second headquarters here in Gujarat. In this way the devotees of Gujarat can have a sip of the holy Ganga that is Amma. With this I conclude my speech, praying that Amma will bestow all the best blessings to Gujarat. And that Gujarat will come to do good works for society.”