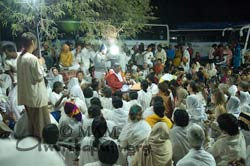 It was only after Amma’s program in Vidarbha that some of the Western devotees travelling with Amma learned the full extent of the region’s suicide epidemic. Figures that baffle the mind: farmers committing suicide at a rate as fast as one every eight hours—more than 1,000 suicides a year. Wanting to understand the problem more clearly, one such devotee asked Amma to explain the situation as well as Amma’s plans to help rectify it.

“The entire lives of these people revolves around agriculture,” Amma said. “The government should be supporting them. In some places it is doing so, but not effectively enough. In other places, it is not doing so at all. Some farmers own and cultivate very small plots of land—maybe only one to four acres. That is their sole source of income. If there is a problem with their harvest—if their crops fail—they go broke. Sometimes when the crops are planted, the price may be at 20 or 30 rupees per kilo, but then by harvest time the value has plummeted to only 10 rupees or less. When this happens, they have no other means to continue farming than to take out loans, using their land as collateral. Often they cannot take loans from government institutions or proper banks, only from private money-loaners. These money-loaners charge extremely high interests rates—as much as 30 to 40 percent. The proper banks will not loan them money because they feel the risk of default is too high. These interest rates place such a financial burden upon the farmers that they end up unable to pay their field-hands. Furthermore, they may have additional expenses, like having daughters of marrying age for whom they need to raise dowry. The result is complete and total financial duress. The farmers feel utterly helpless and, seeing no other way out, they decide to commit suicide. They give their children poison and then drink it themselves.”

Amma then said how, more often than not, the fields are maintained solely by the families themselves. In such situations, much of the responsibility of cultivation falls upon the shoulders of the children, forcing them to discontinue their educations at early ages. Amma explained how the Ashram’s Vidyamritam program, which is providing scholarships for 30,000 such children throughout India, is aimed at correcting this problem. “At least the children who are interested should be given the opportunity to study,” Amma said. “If they receive at least a basic education more avenues of income will become available to them and their families.”

Amma said, “Amma feels the situation is due to how inextricably tied to agriculture these people’s lives are traditionally. If we provide them with alternative means of income, it may help.”

Amma then went on to elucidate the Ashram’s Amrita Sree Program [Amrita Self-Reliance Employment & Empowerment Program]. “The Ashram has started conducting vocational training for groups of women from such families. These groups are then given some initial seed capital in order to start cottage-industry businesses. The Ashram is also coordinating these groups to avail of loans from proper banks. This will help the families become less dependent on the whims of Nature and the success of the harvest.”

Amma paused for a moment and slowly scanned her eyes across the faces of the 400 or so disciples and devotees surrounding her—people from around the world trying to mold their lives after her example of selfless service. She then said, “When someone is drowning in a river, they will cling to even a single straw for dear life. Amma feels these programs could be like that straw, providing them with at least some hope for the future.”

Amma then reflected on the larger problem: how the soil is losing fertility due to pollution, global warming and the additional demands placed upon the earth due to the exploding population. She stressed the need for India to conduct more research in the area of agriculture technology and rainwater harvesting. “We have to start thinking of means to conserve water,” Amma said. “We have to learn how to produce more crops with less water, and how to get water from the lakes, ponds and rivers to farming areas.”

Amma said she believed that artificial means of cultivation were a necessary evil. “These artificial means of producing greater crop yields are temporarily appeasing hunger, but ultimately they are causing further damage,” she said. “It is like cross-breeding a donkey with a horse. The result is a mule, which has neither the good qualities of a horse nor a donkey. Similarly the new ways of cultivation are creating more crops, but are resulting in deterioration of health—physical and mental. Regardless, they are needed at this point in time. Such is our state. In this way we can continue for some time—like a cancer patient extending his life another six months through chemotherapy.”

“In truth,” Amma said, “the situation is worse than a third world war. If it were war, there would be instant death—not this long, drawn out suffering. Rectifying the situation is a Himalayan task. Only if we generate love and compassion in our hearts and come together as one can we hope to make a change.”