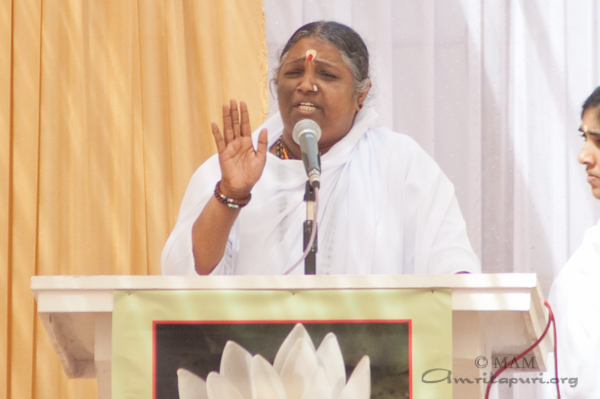 Amma addressed a gathering of women religious and spiritual leaders at a summit in Jaipur today: “Making Way for the Feminine for the Benefit of the World Community.” The event was organized by the Global Peace Initiative of Women and held at Clarks Amer Hotel.

In her address, “The Infinite Potential of Women,” Amma called on the need for women and men to come together in unity, accepting, respecting and valuing each other’s differences. “Alienating women from matters of finance and politics is to discard half of the intellect and strength of society,” Amma said.

Amma also stressed the importance of women holding on to their innate femininity and qualities associated with motherhood. “It’s true that women must move forward, but they also need to turn back to consider the child following in their footsteps, not discarding their parental responsibilities. For the sake of her children, a mother should have at least some patience. It’s not enough to give a baby space in her womb; she must also give it space in her heart.” 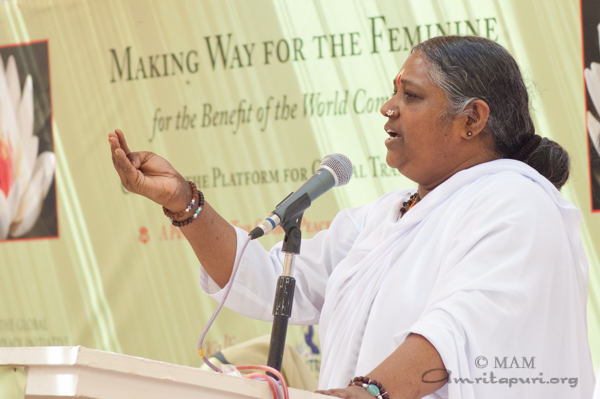 The meeting was convened by Dena Merriam and co-chaired by Rev. Dr. Joan Brown Campbell and Sister Joan Chittister. Participating in the event were many young people from around the world.

Upon the conclusion of her address, Amma met privately with representatives from areas of conflict throughout the world, including Pakistan, Afghanistan, Iran, Iraq, Palestine, Turkey, and several African countries. Amma offered them her full support, saying that she would bless their initiatives and provide every help she could.

In 2003, Amma addressed the organization’s first summit, whereupon she was awarded the Gandhi-King Award for Non-Violence.