Answering the prayers of her children in Kottayam, Amma held a one-day public program in the city. Even though Kottayam is only 80 kilometers away from Amritapuri ashram, the local devotees had been requesting Amma to hold a special public program in their city for a long time. Amma had held a program here 25 years ago, in 1985. A huge crowd came to see Amma and have her darshan. 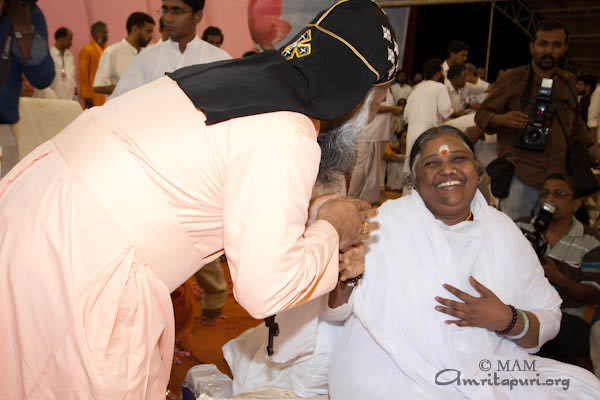 Among the dignitaries on the stage, two very distinguished guests who came to greet Amma and help inaugurate some of the charitable activities in the Kottayam area, included the archbishop of the Syro Malankara Church, Baselios Mar Cleemis, and the respected Malliyur Shankaran Nambootiri, who is renowned for his spiritual talks on the Shrimad Bhagavatam. It was amazing to see the unity of religions represented by the Archbishop’s attendance and the sacrifice of the old Bhagavata teacher, who came in spite of being 90 years of age and under physical strain.
MLAs, Sri N. Jayaraj and Sri V.N. Vasavan and the Chairperson of Kottayam Municipality, Sri Bindu Santhosh Kumar,  were also present on the stage.

The archbishop praised Amma’s charitable activities, saying that they arose out of love, and that it was love that was also embodied in the life of Jesus Christ. He said that he prays for God’s Grace that Amma may continue to spread this love, which is so necessary in this world.

Several dignitaries helped to inaugurate the charitable activities in the area. Scholarships were distributed to students as part of the ‘Vidyamritam’ free educational scholarship. Working capital was distributed to members of the ‘Amrita Shree’ self-help program. Villagers from Vijayapuram took a pledge in the presence of Amma that they would renounce consuming alcohol and other intoxicants, in order to bring about a totally intoxicant-free village.

During satsang, Amma talked about the importance of giving. ‘Without giving and taking, there is no life’. She stressed on the negative effect that alcohol and intoxicants have on individuals and the society, and urged people to shun such bad habits. ‘When you take intoxicants, it isn’t alcohol or ganja that you consume. It is the tears and blood of your family and friends’ Amma reminded every one.

There were a variety of cultural performances by the students of Amrita Vidyalayam. Amma sang a beautiful set of bhajans, and led a short meditation. All people were given free food and Amma gave darshan from 10 in the night until 8 in the morning the next day.