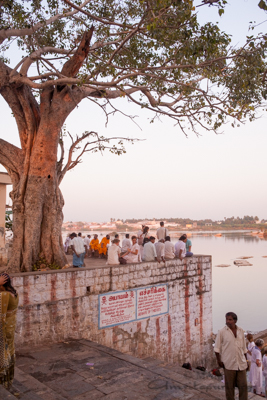 20 Jan 2008, Bhavani River, Tamil Nadu, Bharata Yatra 2008
On the way to Pondicherry, Amma stopped along with the traveling devotees at the convergence of two holy rivers, the Bhavani and Kaveri. Amma used to visit here regularly in between stops of the India tours, but it had been more than three years since the last one. Once, when Amma and the residents stopped here, there was no food to distribute as prasad, so Amma herself concocted a special kind of rice gruel, with mung bean and shredded coconut. In honor of the river, this dish was named ‘Bhavani kanji,’ and is served for dinner at the ashram on Tuesdays. 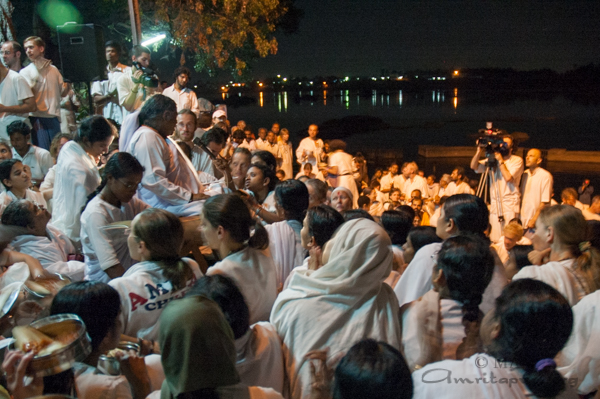 On this occasion also, Amma started distributing plates of prasad after sitting down. Many devotees passed their personal plates with names written on them to recieve the prasad, but this created some confusion. When the plates came back, nobody knew which plate goes to who. One person yelled out, ‘Linda! Where’s Linda?’ Another ‘Abhaya? Abhaya?’ Seeing this confusion, Amma simply laughed, and began singing some of the newly tuned Tamil bhajans, with only the accompaniment of a brahmacharini’s voice and handclaps.

In a way, one can say that this is a convergence of three rivers. This is because Amma often says, ‘Amma is a river. My nature is to simply flow.’ It is the devotee’s goal to merge into that flow, which is the real ‘samgamam,’ or convergence.
— Sanjaya