Pongal was celebrated in the Ashram. Amma distributed payasam to all the residents in the afternoon.
The day on which the sun begins to move northwards is called ‘Makar Shankranti’.  In Tamil Nadu this festival is called the Pongal. 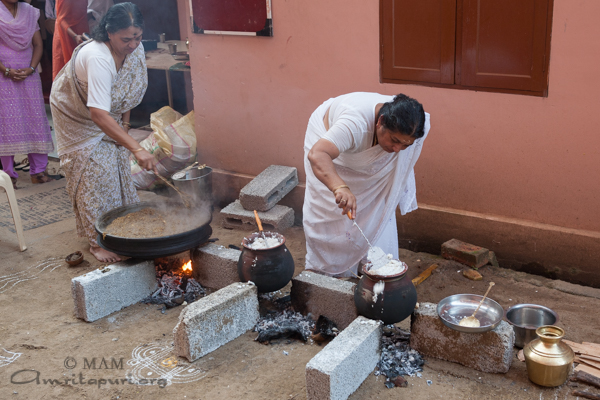 Pongal ushers in the New Year in Tamil Nadu. Newly-harvested grains are cooked for the first time on that day. Joyous festivities mark the celebration in every home. The poor are fed and clothed. On the next day, the cow is worshipped, and birds and animals are fed. Its called Mattu pongal.

What Amma says on Pongal

“For me there is no creator and creations. Like the ocean and the waves, they are all one and the same. God is in the people or in the world, and the world is in the people. It is love that transforms into worship. Even nature is part of God. That is why we have temples even for insignificant creatures such as lizards, trees and poisonous snakes. We have ‘Mattu Pongal’, we worship the cattle. We need them for cultivation. It is a form of thanksgiving to the entire creation as that is the power that sustains life.” 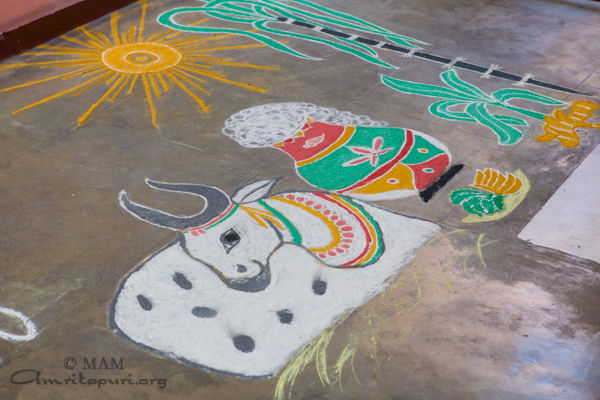 from the archive article …

…. During Satsang on the rooftop of Amma’s Madurai ashram last night, Amma told of how over the three days of Pongal a different aspect of the Divine in Nature is worshipped, partly with the symbolic offering of payasam (sweet rice pudding).

The first day the Sun is worshipped as the embodiment and source of Life-Force, without which we could not be. Payasam is offered to the sun seeking his blessings, and then eaten as prasad; the second day, animals are venerated, usually through the worship of a representative cow, which again is offered sweet payasam; the third day sees the family relations worshipped, of course through more offering of payasam, and, more importantly, through the coming together of family members. If there have been arguments or miscommunications in the family, this is the day when the air is cleared and hearts are opened. It can be a very healing time, restoring a deep relationship with the Universe, Mother Nature and one another. Through this festival, the Creation is recognized as the miraculous divine blessing it truly is.

Amma also explained an interesting point about the intelligence behind this kind of worship, saying that it is not superstitious, but in fact very practical. During this particular festival for example, the tradition of cooking payasam and allowing it to boil over is observed all over South India. This overflowing of sweetness represents the Prema (Divine Love) that should overflow from our hearts towards all of Creation. Amma continued with a remarkable point. She said that the steam rising from the rice, jaggery, cardamom and other spices being boiled in so many households and mixed with the smoke from the firewood traditionally used, actually creates a special medicinal combination that has a very beneficial effect on the atmosphere. The collective observance of this and similar practices has a positive effect on both the ‘mental environment’, as well as the weather, climate and harmony of Nature in general. This is just one aspect of the subtle wisdom underlying these simple, elegant customs.