“All of you know stories about Onam and Mahabali {story}. There is no point in repeating them. But there is an important message behind the Onam celebrations,” Amma told the 10,000-plus devotees who’d come to Amritapuri in order to celebrate Tiru Onam. Amma then explained how not only the story of Mahabali, but every aspect of Onam—the pookkalams [flower mandalas], the games, the feast–points to the importance of cultivating love and feelings of oneness in our hearts. Furthermore, Amma said, in today’s war-torn and conflict-ridden world, imbibing this message is highly needed. 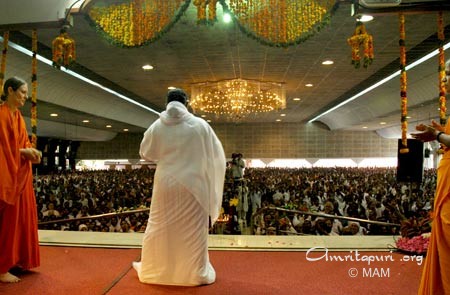 Amma then explained how kaduvakkali, villadichaampat and onathallu help transform hunting, war and fighting into music and games. “In short, the message of Onam is to forget all differences and make life joyful,” Amma said. “Those who take part in onathallu do not harbor any feelings of hatred or revenge because they are aware that it is just a game. In a game there is no ego; there is no feeling of ‘I and mine.’ In a game, innocence awakens in our heart, allowing us to see everything in its light. When this happens, there is only bliss.”

Amma then turned her focus to the state of Kerala, expressing her sorrow over its ethical, environmental and cultural deterioration. “Kerala is known as ‘God’s own country,’ but with each passing day suicide, murder, clashes, harassment of women and organized crime increase. When Amma sees this, she wonders if the devil has taken over ‘God’s own country’ and taken the human hearts there within hostage.”

Amma then took issue with society’s fragmentation along the lines of caste and religion, which she says still exists in subtle form in the human mind. “During Onam, may the Brahmins, Nambootiris, Nayars and people belonging to the scheduled castes and tribes, the leaders, the artists and the labourers forget all distinctions and come together to take part in the Onam feast. May they take part in the Onam games together. In this way, may the feeling of difference between human beings be reduced.”

Amma then further spoke about the symbolism in the legend behind Onam. Explaining the symbolism behind Vishnu approaching Mahabali as Vamana, a young boy, before revealing his universal form, Amma said, “In the same way, when we become possessed of a childlike heart, we will be able to expand and rise up to God.”

Amma continued, “In order to eliminate the ego, one needs the grace and disciplining of a Satguru. Coming as a student, Vamana discharged his duties as a Guru. In the same way, the elder has something to learn from the child, the teacher has something to learn from student and the philanthropist has something to learn from the beggar. This is also conveyed to us through Vamana’s story. We shouldn’t consider anybody as insignificant. We need to have the understanding that what we consider to be ours, in fact, belongs to the Lord. In the realm of our consciousness, the feet of the Lord should leave clear imprints. Vamana kept his feet on Mahabali’s head in order to convey this idea to those who did not have this understanding.”

Amma said that the equality spoken of in association with Onam is not external, but internal. “In the inner realm, there is always equality between human beings,” Amma said. “We are all one Atman [Self]. We are all children of the Divine Mother. When this attitude grows within us, we will be able to see others as our own Self and love them. This is true equality. When true love fills within, it flows through our actions as compassion. We feel the suffering and sorrow of others as our own.”

Amma concluded her talk with a prayer that the unity, love, kinship and joy associated with Onam should not be limited to the holiday but become part and parcel of our everyday lives.

Upon the conclusion of her satsang Amma rose to her feet. She told everyone to stand up and dance. “Don’t be shy,” Amma told them. The “Hari Bol Hari Bol” then began to play. Amma stepped gently from side to side, keeping rhythm with her kaimani [small hand cymbals]. When the song was finished, Amma sat down in meditation for some time.

Upon getting up, Amma began giving darshan. After a few hours she started serving Onam sadhya [the traditional Onam feast], as prasad to all 10,000 people. When that was finished, it was time to feed Ram and Lakshmi, the ashram elephants. Then, a few hours later, Amma spent some time in the swimming pool with the children from the Ashram’s orphanage who are spending the Onam holidays in Amritapuri. One by one, Amma joyfully pushed all the children in the pool—as well as many fully clothed devotees we happened to be on the scene.

It was a special Onam for all the devotees who were able to be in Amma’s presence. However, Amma did not forget all her children who could not come to the ashram for the celebrations. After everyone had taken their prasad, Amma called for rice and samples of all the curries. She then mixed them all together with her hands in a single plate. “This is for all the children who couldn’t come,” Amma said.