In the two days of the annual Brahmasthanam festival in Trissur, thousands of devotees came to receive Amma’s embrace, hear her soothing words and soul-stirring bhajans, and partake in the group puja functions. As the sun above pounded down heat on everyone, Amma showered the coolness and sweetness of her presence in everyone’s heart. 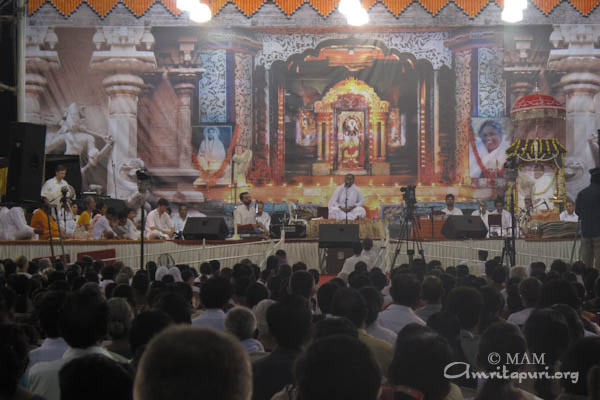 Amma sang many old bhajans along with a few newer ones. Her satsang stressed values in society, the importance of dispassion, and warned of Kerala’s dependence on intoxicants.

Amma’s humanitarian efforts played a part in the programs. During the evening program the first night, scholarships were awarded to dozens of children. This was part of the ashram’s ‘Vidyamritam’, which seeks to relieve growing suicide rates in Kerala by providing free educational scholarships to the poor.

Working capital was also distributed to several members of the ‘Amrita self help’ group. This charity seeks to train and enable the women and poor villagers in a trade, by which they may become self-sufficient.