Amma was in Kolkata when her father, Sri. Sugunanandan Idamannel (Sugunacchan) passed away Monday morning (22 March 2010). From that morning itself, his relatives and the ashramites who had not gone on tour with Amma began chanting archana and holding vigil around his body, which had been decorated with flower garlands and placed in a glass case at the hospital. Word spread quickly, and his relatives, members of the community and, increasingly, Amma’s devotees, began coming to offer flowers and to pay their respects. Each person circumambulated his body and prostrated at his feet before joining those seated in their prayers. The crowd of well-wishers spilled out of the room, into the corridor, onto the hospital veranda and filled the grounds in front of the hospital. 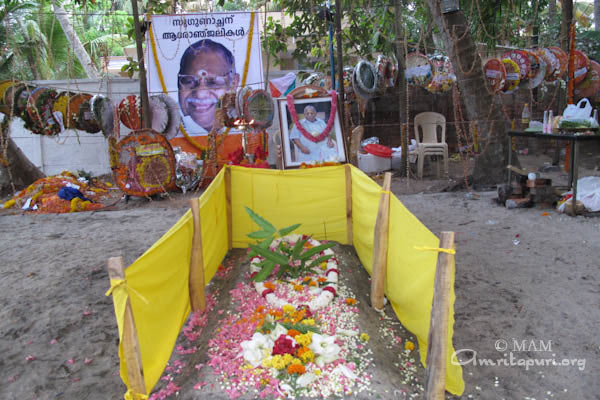 The next morning, Amma arrived and went to meet Sugunacchan’s other children and their families, where she also circumambulated Acchan’s body and consoled the distraught relatives. She sat in prayer while the ashramites continued chanting archana. After some time, she walked in procession behind the body as it was carried to his home and placed in the center of the house’s main hall. There, Amma asked the ashramites to begin chanting the eighth chapter of the Bhagavad Gita, which is traditionally chanted after death and prior to cremation. This chanting continued unbroken for the next 36 hours, as devotees and well-wishers flowed through the front doors of the house to circumambulate Sugunacchan’s body and pay their respects. For much of the time, Amma also sat. Many cried openly in Amma’s arms. Even for those who did not know him personally, it felt a great loss. Many expressed that they felt they could never repay their debt of gratitude to the man who had helped bring into the world the form of Sudhamani Idamannel, the girl who would grow up to be seen as the mother of millions. Amma herself was never distraught. At the same time, she seemed equally at home fulfilling her dharma as the daughter of Sugunacchan, as she is serving as mother, guru, guide, and leader.

On Wednesday afternoon (24 March 2010), Sugunacchan’s body was brought out in front of the house, to better allow for the countless people who had come to offer their respects. For several hours that evening, a seemingly endless line of people flowed past Acchan’s body. The mood throughout was serious but not heavy. His passing received the honor and accord it deserved, and each aspect of the ritual observances seemed fitting and perfectly performed. Then, too, was the awareness that here was a man who had nothing to regret. As one onlooker put it, “What more could you ask from a life?”

At 8:00 p.m., Amma stood and circumambulated his body, kissing and blessing him. His body was carried by his sons and grandsons, as well as the senior sannyasis of the Math, to the cremation ground, led by his eldest surviving son, Sri. Suresh. After performing all the customary rites, the flames of the funeral pyre were lit, and Sri. Sugunanandan Idamannel’s body was offered back to the elements.

On the day following the cremation, the 25th March, a ceremonial function of collecting the ashes (sanjayana) was held in Amma’s presence, lead by Amma’s elder brother Suresh. As per the tradition some of the ashes will be kept for spreading in spiritual locations accross India. The remaining ashes were carried on that same day to the Amritapuri ocean by the family’s male members and the swamis.

Traditional ceremonies and observations will take place successively during next 16 days, until 8th April.

Ceremonies were also held at each of Amma’s centers around the world, and letters, emails and phone calls poured into Amritapuri. One message seemed to best sum up the general sentiment among all of Amma’s devotees around the world:

“Prayers and gratitude for your incredible contribution to humanity… you gave us our precious Amma. For this, you will be remembered forever.”