Amritapuri, 23 Mar 2010
The body of Sugunanandan, father of Mata Amritanandamayi, who died on Monday (22 Mar 2010), was cremated on the premises of his Edamannel house near the Amritapuri ashram on Wednesday at 8 p.m. Suresh Kumar, the eldest son of Sugunanandan, lit the pyre. Thousands of people including devotees, Sanyasins of various ashrams, political and community leaders paid their last respects to the departed father of Amma. 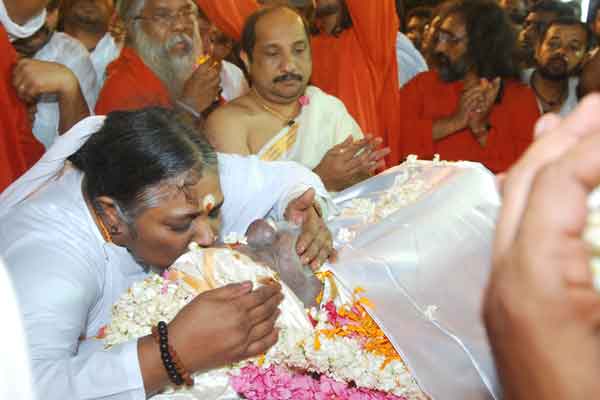 Amma, who returned from Kolkata on Tuesday morning, was sitting by the side of the body along with her mother Damayanthi, sisters and brothers and sanyasins. Ashramites have been chanting 8th Chapter of Bhagavad Gita repeatedly round the clock.