Mr. Sugunanandan Edamannel, Amma’s father—Sugunacchan, passed away this morning at 10:30 a.m. due to cardiac arrest at his residence in Amritapuri. 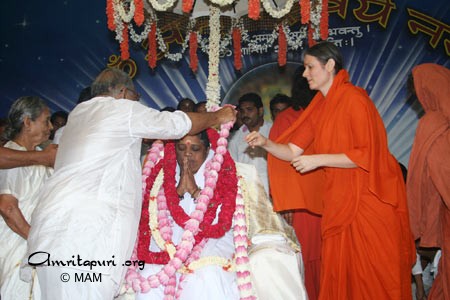 Sugunacchan was like the pillar of the Ashram.  He loved the ashramites as if they were his own children and saw Amma as his Guru and God.

Acchan* was a man of great will power, who would always follow his word, and a firm believer in the principle of contentment. It was Acchan’s policy to always give if someone asked, without reservation. Many people in the village used to seek his assistance and advice.

He was a natural leader and was respected by all—as a businessman, as a builder of fishing boats, and as a human being. He continued working into his 80s.

It is well documented that it took time for Acchan to accept that his daughter was a Jnani. In response to the odd and often rebellious behavior Amma would demonstrate in her youth, Acchan would often reprimand her as any father would. At times, he would spank Amma. A few years back, a devotee who had read about such incidents scolded Acchan for his attempts at disciplining Amma. Acchan replied, “Didn’t Yashoda tied up Krishna? Didn’t Rama’s mother send him to the forest? Why? Because nobody told them that their child was God. Similarly, nobody told me that my child is God.”

Acchan was a treasure trove of stories about the divine plays of Amma’s life, many of which are not as of yet recorded in any books. In the past several years, Acchan regularly took special occasions, such as Guru Purnima, to tell such stories to ashram residents and visitors. In 2004, during one such talk, he told of a family pilgrimage to the Meenakshi Temple in Madurai. Acchan said that as soon as Amma saw the murti, she entered a divine mood. Soon, Amma began to dance. It created a real stir, and soon many people gathered around. When the pujari in the sanctum sanctorum saw the commotion, Acchan said, he seemed to immediately recognize that this young girl was not a regular devotee, but an embodiment of the Divine Mother. He immediately removed one of the garlands from Meenakshi Devi, came out of the inner temple and placed it around Amma’s neck. The whole scene was almost too much for Acchan, who told everyone that he resolved then and there not to bring Amma to temples any more.

Didn’t Yashoda tied up Krishna? Didn’t Rama’s mother send him to the forest? Why? Because nobody told them that their child was God. Similarly, nobody told me that my child is God. – Sugunanandan

In 2007, on Guru Purnima, Acchan again addressed the ashram residents. “I am happy seeing all this,” he said, reflecting on his lifetime of witnessing the purana of Amma’s life unfold. “Damayanti Amma and I consider it a great fortune that we have been able to witness all this.”

With Suganacchan’s passing, the world lost a man who was a direct and intimate witness to the miracle of Amma’s early years.

Acchan suffered a heart attack in 2005 and he was under medication. In 2009 he was fitted with a pacemaker and was placed under regular medical supervision. A brahmachari had been serving as a 24-hour attendant for him for the past couple of years.

Acchan is survived by his wife, Damayanti Amma (75),  and eight children.