13 October 2007 — ‘s-Hertogenbosch, Nederland
“We used to have just a couple of gas burners, a few pots and pans and then go cook somewhere behind the building—often in the dark without any lights,” laughs Paul Sharma, reminiscing of the days when he and Lavan Jain first began cooking for Amma’s Europe Tour programs. Desiring to raise money for Amma’s charitable projects through selfless service, the two UK citizens have travelled the length and breadth of Europe with Amma serving hot and tasty Indian meals and snacks every year since 1990. 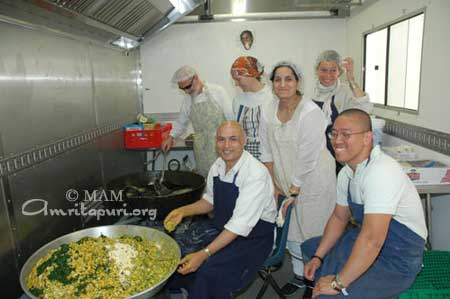 But what began as a two-man operation has since evolved into a massive undertaking with a staff of more than 50 volunteers. And this year marked the beginning of a new chapter in the story of the Europe Tour Kitchen: a kitchen on wheels. 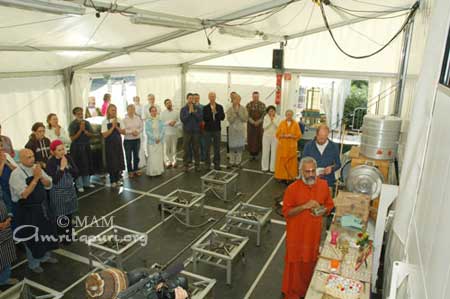 Custom-created using the interior of a semi-truck container, the new mobile Europe Tour Kitchen is equipped with a walk-in freezer/refrigerator, 12 gas cookers, a five-person frying station, dosa stoves, a pot-washing area, a 90-square-meter tent with wood floor, hot and cold running water, stainless-steel shelves and an additional tent for people to cut vegetables inside. In theory, the kitchen can be setup and broken down within three to four hours.
“We wanted to have an industrial kitchen of the same level you find in a Hilton or Marriot Hotel but portable,” says Akshay (Matthias Schneiderhan), an Amritapuri Ashram resident who stayed two months at M.A. Centre Germany in Hof Herrenberg in order to construct the kitchen. “I don’t think anything else like this exists anywhere in the world.”

The mobile kitchen is not only superior to previous setups in terms of functionality, but also in terms of economics. It is no longer needed to rent refrigerators to store perishable food items nor tents to house the cooking. Food can even be prepared in one city and transported to the next. Furthermore, when not being used as a kitchen, the container is used to carry various Europe Tour supplies, reducing the number of vehicles needed to conduct the tour. All this enables the Europe Tour Kitchen to raise more money for Amma’s charitable social-welfare projects—the main motivation for Paul and Lavan since the beginning.

“The first year Lavan and I came for Amma’s program was 1989,” recalls Paul while stirring his “secret recipe,” Punjabi curry, in Winterthur, Switzerland. “At that time, one of the organizers asked us if we could drive to a caterer and pick up some food that he had ordered. When we got there, I asked the contractor how much he was charging per plate. He told some five pounds. I got mad! I said, ‘I can cook that for 60 or 70 pence! How are we going to raise money for Amma?’ That’s why the idea came. Probably Amma put the idea in my head. So Lavan and I immediately went to a store and bought chips and Coke and candy and began selling that. Then we made sandwiches. It just evolved naturally from there.”
With the number of people coming from Amma’s darshan in Europe ever increasing, a kitchen of this level had become a necessity. “In one city, I may cook 5,000 spinach pakoras and 2,000 onion bhajis,” says Lavan, seated in front of his fryer in the mobile kitchen. “Last year in Barcelona, I went through 250 kg of onions alone.”
One night in Paris in 2006, the kitchen prepared 1,500 meals—and that doesn’t count the masala dosas, fried snacks or Indian sweets.
In ‘s-Hertogenbosch, Nederland, on 13 October 2007, the day of the first program of Amma’s 2007 Europe Tour, Swami Ramakrishnananda performed a puja to consecrate the mobile kitchen. When one enters a new building, a milk-boiling ceremony is conducted. Before first driving a car, one performs vahana puja. But how does one consecrate a kitchen-on-wheels? Amma’s 108 names were chanted, nivedya puja was done and milk was boiled on one of the gas burners—the flame lit from the oil lamp used in the puja. In attendance was the entire kitchen staff—men and women aged 18 to 70, from France, Ireland, England, India, Germany, Switzerland, Netherlands, America, Japan, Canada, Finland, Italy, Spain…

Asking everyone to offer a handful of flowers to a picture of Amma set up on one of the kitchen counters, Swami Ramakrishnananda said, “Pray to Amma that we are able to work with the right attitude, a spiritual attitude, and are able to make Amma’s children happy through our food!”