Friday marked the beginning of the last three days of Navaratri during which Saraswati, the Embodiment of Knowledge, is worshipped.  Village children began arriving at the Ashram in the late afternoon to place their school textbooks and musical instruments on the temporary altar that had been set up on the stage in the main hall.   Each item was given a number and labeled with the child’s name, age, and village. 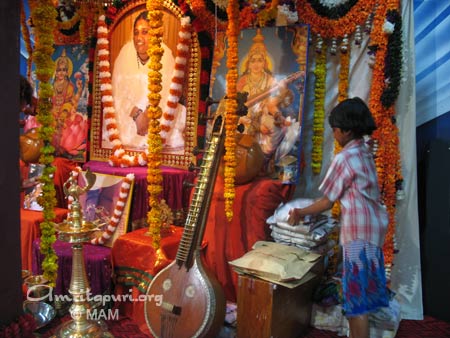 They were later joined Brahmacharis, Ashramites and University students who were also adding their own items to be blessed by the Goddess Saraswati over the net three days.  Sw. Turyiamritananda performed a brief puja after which everyone approached the altar and offered flower petals. 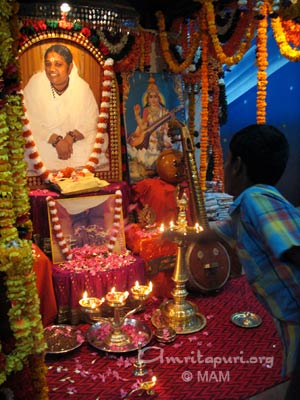 The day after Navaratri (Sunday morning) is Vijaya Dashami (tenth day, festival victory) and it is on this day that everyone picks up their items and either undertakes new tasks or resumes existing ones with a child like innocence.

Sw. Turyiamrita will perform a special ceremony in which pre-school children are introduced to the first letters of the alphabet.