It has become a birthday tradition – on Amma’s 54th birthday she once again performed the marriage ceremonies for 50 impoverished couples. The Ashram sponsored all the traditional wedding items—from brocade saris, to gold wedding necklaces and rings to post-wedding family feasts. This year, one of the brides was Jayashree, a 24-year-old girl who says she owes her entire life to Amma.

In her youth, Jayashree lived in Pathanamthitta District in Kerala. Her alcoholic father would regularly beat her mother and threaten Jayasri and her two sisters. One night, Jayashree’s father attacked her mother with a knife. Although only a child, Jayashree tried to stop her father. The incident ended with Jayasri’s mother dead and Jayashree herself blind in one eye.

Her father was sent to prison. And Jayashree and her two sisters were separated. The youngest was taken in by an uncle, the eldest by an orphanage, and Jayasri was sent to the Ashram’s Amrita Niketan orphanage in Paripally, Kollam District.

As an resident of Amrita Niketan, Jayashree frequently visited Amma at the Ashram. “Amma gave me a lot of love,” reflected Jayashree. “The sorrow of losing my mother melted away in Amma’s love.” 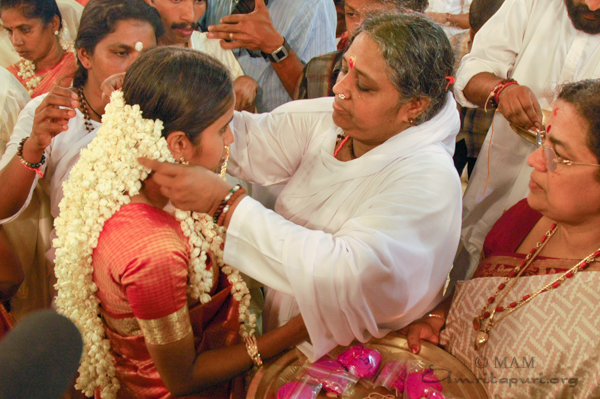 Amma dressing up Jayashree for her marriage –>

Jayashree’s education at the Amrita Vidyalayam in Paripalli was similarly sponsored by the Ashram. After she graduated, Amma arranged a job for her at AIMS, the Ashram’s super-specialty hospital in Cochin.

It was while working at AIMS that Jayashree met Shivanandan, an electrician from Kozhikode. They fell in love and decided to get married. Their wish was fulfilled by Amma on September 27th.

Amma has also offered the newlyweds a new house as a part of the Amrita Kuteeram project.