Amma started her programs in Delhi in one of the capitol’s new suburbs on the west bank of the holy Yamuna River, not far from where Lord Krishna used to dance with the Gopis.  The entry to the venue was a temporary Rajasthani monument.  The stage had six massive pillars.  The crowd did everything possible to catch a glimpse of Amma as she walked to the stage.  She sat in front of an arch decorated with flowers with thousands of crystals giving off a red hue. 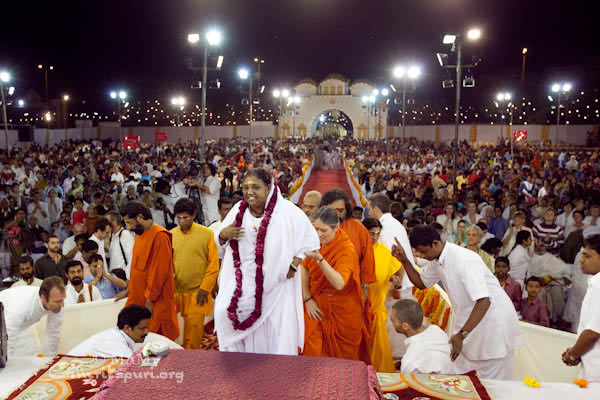 Amma was welcomed by the Chief Minister of Delhi, Smt. Sheila Dikshit, the Chief Guest during the function.

After a prayer that was sung by some of the Vidyalayam students, she assisted Amma to gave away 100 Vidyamritam Scholarships to poor students. As the girls received Amma’s blessing, the Chief Minister made it an effort to humbly bend down to Amma’s feet with each of the envelopes that contained a scholarship. “These girls are really blessed with these grants and I wanted to do an extra prayer for each one, hoping that it would bring an even greater blessing to all of them,” said Sheila Dikshit.

Amma commemorated Women’s Day in her address: “Even if women are socially and financially empowered, for their full potential to be realized, it is very important that they believe in themselves. It will be difficult for a dancer to dance on a stage that is continuously shaking. In a similar way, for women to achieve true success, the foundation should be self-confidence.” 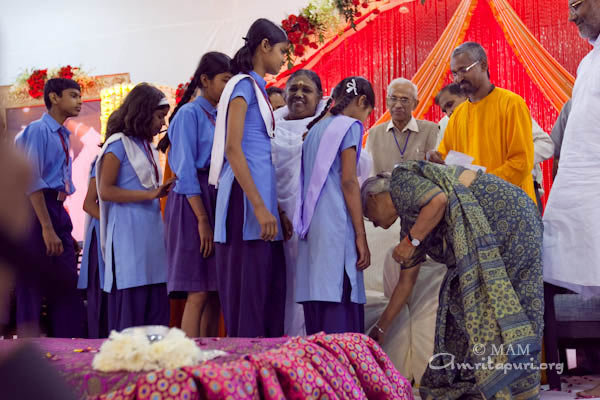 The Minister of State for External Affairs, Shri Shashi Tharoor gave away 50 “AmritaNidhi” Pension Schemes for women.  “It is a great honor to be in the presence of the Mother and to greet you all on (International) Women’s Day.” He stressed the importance of educating women as one of the most important ways to uplift society. ‘When you educate a boy, you educate a person and that is good, but when you educate a girl, you educate a family and you transform a community. That is why it is so precious that under Mata Amritanandamayi’s blessings so many scholarships, bursaries and awards are given to girls today. These girls will have a much greater future now because of the education they will get. Let us celebrate this special day, let us never forget the benevolence, the kindness and the love that Amma fills us with by Her own presence.”

Union Minister of State for Human Resources Development, Smt. D. Purendeshwari, said there was no better way to celebrate this Women’s Day then to be in the presence of Amma. “If we look at her name: Mata Amritanandamayi, she who is filled with the nectar of eternal bliss, we can ask ,’How is she filled? It is because she is affectionate, she is giving and She is caring. So ultimately the happiness is in the giving. That is what we can all learn from. Amma is reaching out to the most marginalised sections, to people who are in need. The good work that Amma is doing is blessing our country. We here should all feel proud that we belong to a country we call Bharat, in whose soil sages and saints have taken birth, all who have spread one message: Love all. As long as we have people like Amma, we don’t need to worry much about our country.’ The minister then honored the women by giving away “Amritashree” to 5 women Self Help Groups.

Amma personally blessed thousands of people from all walks of life, during the night-long programme.