Amma started her programmes in Mumbai with a public function in the famous Shivaji Park, located right in the heart of the city. Amma was greeted at the dias with the traditional Maharastrian welcome — the sounding of horns followed by arati (the waving of lighted camphor) performed by five couples wearing traditional dresses. 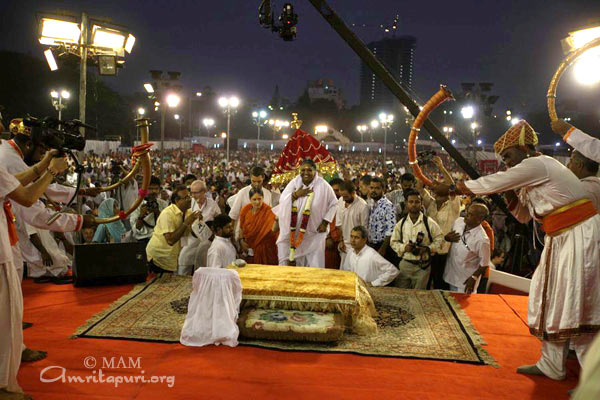 Chief guest Mr. Chagan Bhujbal, Dep. Chief Minister of Maharastra, welcomed Amma on behalf of the people of the state. He said, “I know that after my speech I will go off the stage, but Amma will continue to sit here all night to meet the devotees one by one and give them darshan. I have been observing this for many years and over time I have wondered why so many people from different religions and regions come to Amma. It’s not that she does any magic – It is Ammas healing touch, which feels like your own mother is holding you, kissing and blessing you that has drawn nearly 30 million people from 192 countries to her darshan over the years.

Unlike other saints who sit in the Himalayas and are found missing in times of need, Amma can be seen right in the midst of the situation, working for the suffering, wiping their tears, building homes, schools, hospitals, feeding the hungry, and rehabilitating entire communities. It happened after the Gujarat Earthquake, the Bihar floods, the Tsunami and the Vidharba famine. This noble act sets her apart from any other saint in our country.”

Bollywood actress Smt. Smita Jayakar also addressed the gathering: “Apart from Ammas countless charitable activties, I admire that she is the “Hugging Mother”. Her divine hug sends us to a state of unconditional love, awakening our anahata (heart) chakra. When this happens the “Me & You” disappears, only oneness and unity prevails. This improves the quality of our thoughts and deeds.

Five books in the local language of Marathi were released at the occasion: Amma’s biography (written in the Kadambari Style of Marathi), Amma’s inaugural address of the Vivekananda International Center in Delhi 2009, Amma’s address at the Conference of Women spiritual and religious Leaders in Jaipur 2007, Amma’s address at the occasion of receiving the Cinema Variete prize in Paris 2007 and a Souvenir Book of Amma’s visit to Mumbai 2010.

The Mumbai programme truly was  a dignified start for the Holi festival, which began at midnight, while Amma was continuing her darshan, hugging people from all over the world and all sectors of society, from the fields of politics, arts, science, religion, music, film, media, business and IT. It is this convergence of people from all walks of life that made the programme so unique and colourful.