Pune was once known ‘Punya nagari,’ the meritorious city. Over time, it became shortened to just Pune. Maharashtra is known as the land of saints, which include Jnanesvar, Tukaram, Eknath, and Namdev. Amma’s ashram is only a twenty minute drive from the samadhi shrine of the great saint Jnanesvar, who spread the message of the Gita in the native Marathi language. In these two days of programs, Amma is also spreading the eternal message of Sanatana Dharma. 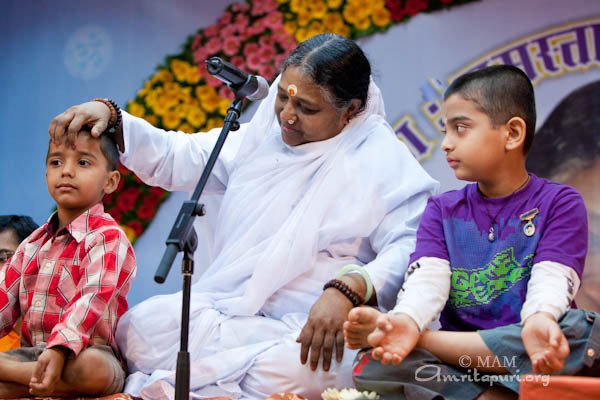 During the programs Amma sang many new bhajans in Marathi, and Amma’s satsangs were translated into Hindi. On the last night, Amma spoke about the importance of dispassion in one’s daily life.

The temperature during the day was scorching hot, while the nights were cool. People came for Amma’s darshan from all flocks of life; from villagers to vice-chancellors of universities.

Amrita Vidyalayam children presented different cultural programs, including some traditional Marathi dances. There was a Kathak dance performance by Dr. Nandakishore Kapote, a disciple of Bhrigu Maharaj, a maestro of dance. On the first night, there was a wonderful performance by Manish Omano on the slide guitar and Santosh Ghante on the harmonium, accompanied by Sukhad Munde on pakawaj and Santosh Salve on tabla.

A new biography of Amma written by Raj Lakshmi Deshpande in Marahi titled ‘Jagan Mata’ was released on this occasion.

At the end of the last darshan, Amma sang a few Telugu bhajans and Mata Rani upon the request of devotees. The darshan ended with what has become a Pune tradition…a local family of devotees dressed Amma up as Krishna and implored Amma to reenact some of the leelas of Bala Krishna.  The devotees approached Amma with large mud pots of curd and milk and offered Amma a stick to break the pots.  Amma herself then drank from each pot and distributed prasad to everyone.