The surgeons at Amrita Hospital removed a football-sized tumour from the jaw of Amar Samad, a 19-year-old tribal boy from Jharkhand, India. The surgery, which was done at no charge, took 14 hours. It involved the reconstruction of Amar’s jaw using his leg bone. It was the largest jaw tumour of its kind ever reported. 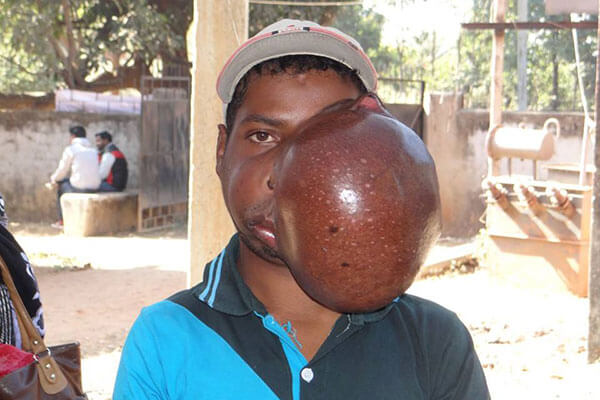 After the surgery, Amar Samad said: “Because of this huge deformity on my face, I could never mingle with other children of my age, as they used to be repulsed by my appearance. It is a huge relief to get the tumour off my face — it is almost like a second birth. I am now eager to go back home, make friends again and work in the fields. I thank the doctors of Amrita Hospital from the bottom of my heart for enabling me to lead a normal life.”

The football-size mass of matter (weighing 4.7 kg) started growing on Amar’s upper jaw in 2008. The dense collection of bone and fibrous tissue was diagnosed as “ossifying fibroma.” This led not only to a grotesque appearance but also difficulty in swallowing and speaking.

“Amar’s medical condition belonged to a very rare disease group called Hyper-parathyroidism Jaw Tumor Syndrome that arises due to a genetic abnormality and causes small-size tumours on the jaw,” said Dr Subramania Iyer, Head, Plastic & Reconstructive Surgery, Amrita Hospital. “His case is unique as a tumour of this size associated with this disease has not yet been reported in medical literature. In fact, this is the largest ever reported upper jaw tumour of its kind. If the condition had persisted, Amar would have found it impossible to eat, and breathing would have become a struggle. The calcium levels in his body had risen very high due to the disease.”

Dr Iyer continued, “We used 3D printing to construct an accurate model of Amar’s face and tumour, and conducted mock surgery for practice. Micro-surgical transfer of his leg bone was carried out to construct a new upper jaw. We had initially planned to remove his left eye but managed to save it through meticulous surgery. His nose was reconstructed with bone, with plastic tubes acting as airways.” 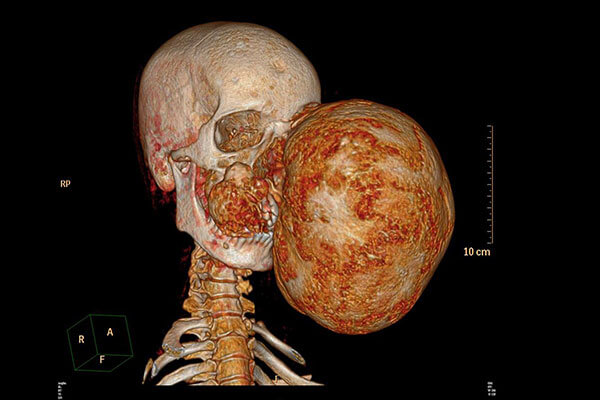 After the surgical procedures, Amar’s parathyroid hormone and calcium levels have returned to normal. He now needs dental implants placed in his reconstructed upper jaw. The position of his left eye has to be readjusted to make it more acceptable cosmetically, though it has limited vision left. Both the eye and dental procedures will be conducted after six months.