Amma returned to the Ryutsu Center in Tokyo, Japan for three days of programs. 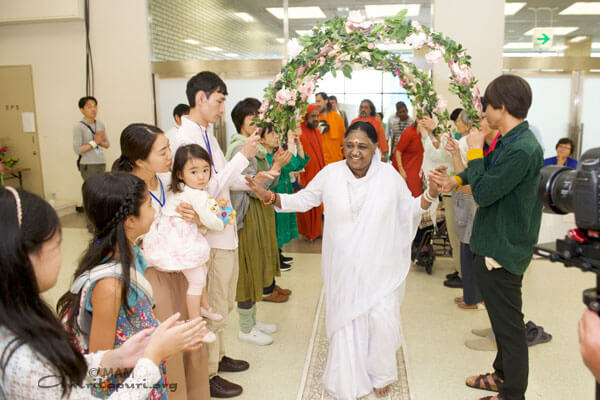 Amma entered the hall through a hand-made, flower archway lovingly made by local devotees. During the three days of programs, devotees were treated to many cultural performances, including a traditional Shinto dance, a violin performance, and an opera singer. On the second night, a local 78-year old devotee spoke about her unforgettable experiences during her first visit to Amritapuri a few years back. Noted Japanese spiritual writer and author of The Alchemist, Koya Yamakawa and his wife Akiko, came for Amma’s darshan. Ratna Sari Dewi Sukarno, former First Lady of Indonesia, philanthropist, and popular Japanese TV personality, also came to meet Amma.

Br. Shantamrita Chaitanya, Amma’s representative in Japan, said: “It has been a tremendous joy to witness the evolution of Amma’s Japan programs during the last 28 years. The sweetness and fragrance of Amma’s love is appreciated so universally, that even in a culturally unique and isolated country like Japan, people from all walks of life and ages travel far and wide to meet Amma and experience the love here. Small children who met Amma at a young age are now doctors, nurses, and lawyers. It’s amazing to see the transformation in this younger generation.” 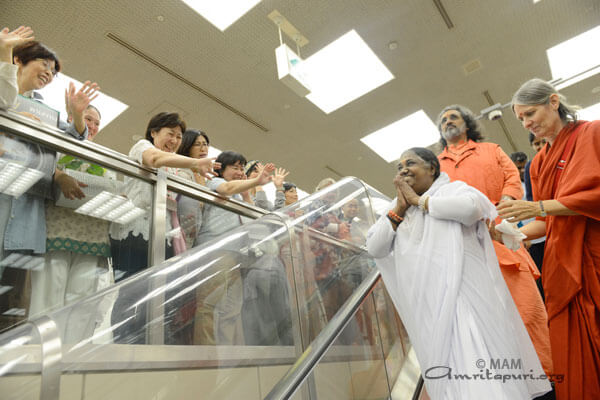 As the three days of programs drew to a close, the devotees began calling out over and over again, “Arigato, Arigato,” which means “thank you” in Japanese.