04 Dec 2009, Amritapuri
After two months, the bell rang three times indicating  Amma was calling us for meditation today. Soon, Amma joined us at the beach. After meditation, she raised a question, “What is the practical aspect of our faith in God?” She passed the microphone from one person to the other. 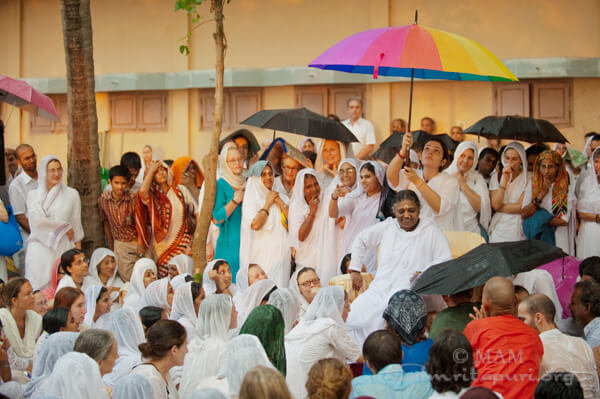 One of the devotees said, “As we know that God takes care of us, we don’t feel that we are alone. Neither the past nor the future bothers us. We remain aware and dwell in the present moment.”

The next person said, “If we have faith, we are at peace. If I believe that everything happening in my life is Amma’s will and for my good, I will be at peace. If I don’t have this faith, I won’t be at peace.” Amma  mischievously asked, “Have you developed it?” He grinned. He knew that Amma had cornered him. He said, “Amma has asked me a very difficult question.” Everyone burst into laughter. He added, “The question is very appropriate. This morning I was tense and disturbed at work. I asked myself, ‘What is the meaning of all of this?’ I told myself, ‘I don’t have faith.’ Now, Amma has asked me whether I have faith.” Everybody laughed and he added, “Actually, 100-percent faith is God realization. Once it is perfect, we have equanimity of mind and won’t have negativities such as anger. As long as we have these feelings, it is true that we haven’t developed perfect faith. One day, hopefully by Amma’s grace it will become perfect.”

Now, it started drizzling and Amma asked, “We sat here with the firm faith that it wouldn’t rain. Now it started raining. What do you do? Has the faith gone? So, what sort of faith should we have?”

One of Amma’s devotees said, “Our expectations need not be God’s will. So, we need to develop the attitude of surrender. Faith is moving from intellect into the heart. From constriction to openness.”

Amma said, “It is true that all of us have faith. We meditated here with the faith that another tsunami won’t come. We believed that an earthquake won’t rock this place. But we need to introspect and find out if we have enough faith to face the given situation with the right attitude.”

Amma recollected an anecdote from a recent tour of America. Many people were waiting outside the hall for Amma’s darshan. There were some occupancy restrictions, so not everyone was allowed inside. As one of them tried to creep in, he was forcefully stopped by the security staff. However he eventually got inside. When the person came for darshan, Amma lovingly caressed him and made him sit next to her. He kept gazing at Amma. He said, “What a wonderful opportunity! It is a dream come true! I had a deep desire to sit next to Amma and now it has been fulfilled.”

Amma summed up, “So, his faith enabled him to see the bitter experience positively and he considered it as blessing in disguise.”

At this point, the drizzle turned into a downpour. Amma wanted everyone to go back, but the translation hadn’t finished, so no one moved. Amma acquiesced, telling everyone to at least cover their head. A little girl was getting wet, so Amma stretched her sari to shelter her. Regardless, soon everyone was drenched. Amma remarked, “So, that was God’s test! As we were discussing faith, maybe God decided to test our faith.”

After the translation, Amma sang, “Mukunda Murare.” Before she left for bhajans, Amma announced, “Children! Please dry your hair and change your wet clothes before you go for bhajans. May your faith be based on right discrimination!”