1 December 2009 — Chanakyapuri, New Delhi
On 1 December 2009, Amma inaugurated the Vivekananda International Foundation in Chanakyapuri, New Delhi. The foundation,  which is an independent non-partisan think-tank, will undertake solution-oriented research and studies through different activities. It also will participate in international, intercultural and inter-religious dialogue. 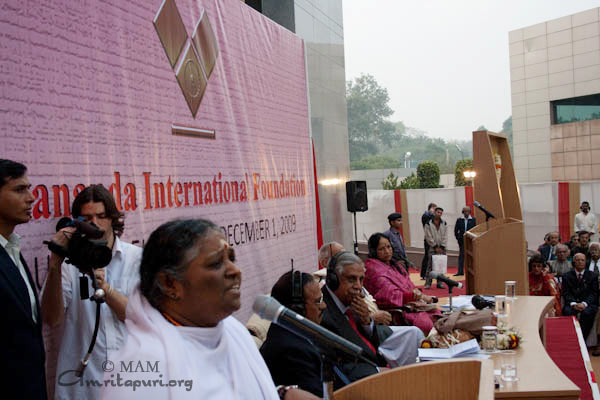 In her inaugural address, Amma defined Swami Vivekananda as “a great sannyasi who revolutionized and transformed the society, a perfect example of devotion to the guru, an elevated karma yogi and a brilliant orator.”

Amma endorsed Vivekananda’s vision and practice of spiritual life, saying, “According to Swami Vivekananda, spirituality was not merely a penance to be performed with closed eyes in a far away forest or cave. It was a way of living to be performed in this world, while living amongst all different types of people, and while facing all circumstances and challenges of life with courage and equanimity. He firmly believed that spirituality is the basis of life and the origin of power and intelligence.”
In her speech Amma touched on a wide range of topics, including the means of creating inter-religious harmony, the proper role of education in society, and the importance of taking pride in one’s motherland and national heritage. The main focus of her talk, however, was India’s youth—their needs and the role adults should play in helping them attain their full potential. Amma said: “How can young people develop spiritual values and qualities? How can we lead them on the right path? How can we use the strength of youth for the growth of society, the country, and the world? We should prepare the youth for self-unfoldment and personal development. For that, we should go to their level and understand them.”

Amma stated that India’s current primary needs are strength, vigor and bravery—inherent qualities of youth. “If our youth arise and act, they have the strength and vigor to create huge transformation in society,” she said. “Only through awakening the inner power dormant within us will there be true transformation and a permanent solution to the problems facing society. Strength is the most important thing needed for an individual or a country. When we realize that this resides in each and every one of us, true strength awakens within.” 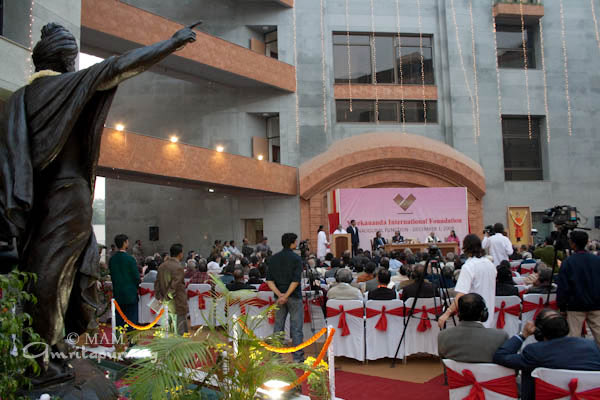 Amma said it was not enough for parents to provide their children with money and luxuries, but that they needed to impart to them spiritual culture and values. “Even if a person buys the most expensive car and fills its tank with the highest grade petrol, a battery is needed in order to start the engine,” Amma said. “Similarly, regardless of much wealth and education the child receives, it is the love and cultural values received from the parents that help the child to handle any circumstances once he or she grows into adulthood, and to give and receive love.”

Amma also stressed the importance of imparting the spiritual teachings to youth in a language, manner and context with which they can relate. She said we should not lecture the youth about spirituality but rather create heartfelt dialogues wherein their questions and criticisms are patiently and lovingly considered. “We should approach them with compassion,” Amma said. “Such an approach will create a change within them. Above all, we should set examples that will inspire them.”

Amma said such dialogues are essential not only for imparting spiritual teachings to youth, but also for the fostering of inter-religious harmony. Problems arise when we say, ‘My religion alone is good and yours is bad.’ This is like saying, ‘My mother is perfect; your mother is a prostitute.’ When we hold discussions with the understanding that each person sees their mother as perfect, we will be able to truly communicate with others.” 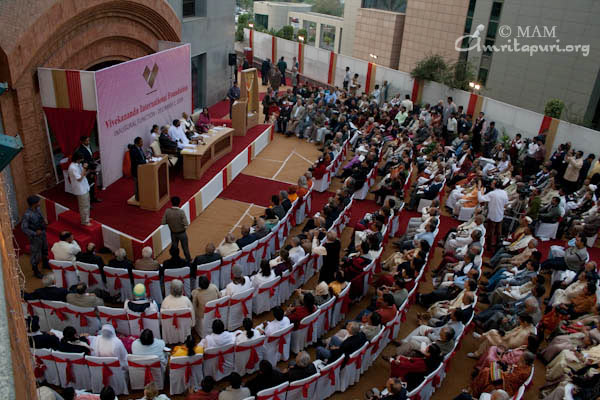 Amma also stressed the importance of cultivating love and respect for one’s motherland and culture. As an example, she told an anecdote about Vivekananda, which took place upon his return to India after his first tour of the United States. Amma said, “It is said that he rolled in the sand and proclaimed through tears, ‘Even after visiting so many countries, I have never found a mother like mine.’ When he stayed in a five-star hotel, instead of sleeping on the fancy bed, he laid on the bare floor and shed tears remembering the poor and starving people in India. Many people who leave India come to feel, ‘Our birth mother’s rice gruel is tastier than our step mother’s sweet pudding.'”

Elaborating, Amma said, “The curse upon our society is ignorance regarding our traditions and the basic principle of spirituality. This needs to change. I have visited so many countries of the world including Australia, Africa and America and they all take pride in their heritage. But we here in India, neither have understanding nor pride of our culture. In fact, many people even deride it. Only if we lay a strong foundation can we erect a tall building. Similarly, only if we have knowledge and pride of our forefathers and history, can we create a lustrous present and future.”

In his welcoming address, Ajit Kumar Doval also praised Amma, referring to her as “spirituality incarnate.” He said, “[Amma’s] abiding love for humanity and her all-pervading energy are in line with the great tradition of our spiritual leaders, who from time to time lead humanity and the destiny of this nation, providing a sense of continuity to our civilization—that civilization that constitutes the bedrock of our nationalism, of our identity, of our nation and its people.”