Amma sent her heartfelt obeisances to Pujyasri Jayendra Saraswati Swami, the 69th Sankaracharya of Kanchi Kamakoti Peetha, who left his body the 28th of February, and her condolences to his disciples and devotees. Amma also sent one of her senior disciples, Swami Ramakrishnananda Puri, to attend the rites and prayers. 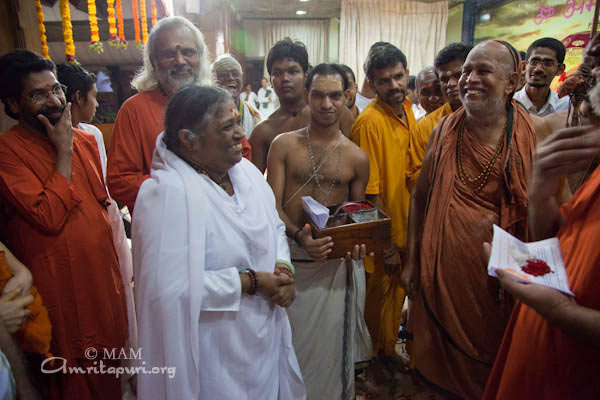 Amma said: “Some may wonder whether it is proper to grieve when a sannyasi, who has realized that he is not the limited body but the all-pervading Supreme Self, takes samadhi. Although the sannyasi has attained the ultimate truth, when a person dies a void is created in their absence. As an authority of the Vedas and six systems of Indian philosophy, Sri Jayendra Saraswati Swami’s samadhi creates a big void not only in the hearts of his devotees but throughout this country as well since he was a renowned representative and spokesperson of its ancient traditions.” 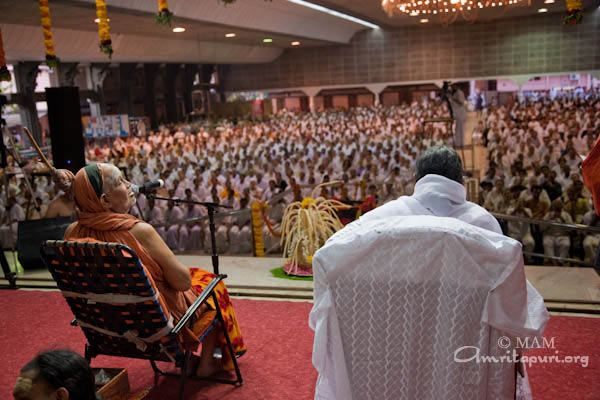 In her message, Amma also recalled the Sankaracharya’s meeting with her in 2010 at the Amritapuri Ashram. She said, “This Sankaracharya’s visit to Amritapuri broke many rigid rules and barriers set hundreds of years ago. By stepping outside his ashram, he demonstrated courage, fearlessness and broadmindedness.These indeed are the qualities a true sannyasi should have.”