Amma’s programs in Munich are always marked by classical music – some of the musicians belong to Munich’s Philharmonic Orchestra. The musicians always make the time to lend their time and talents to Amma’s program, to the delight of all the program attendees. As Amma arrives on the stage, she is welcomed by these musicians, dressed in traditional Bavarian attire. 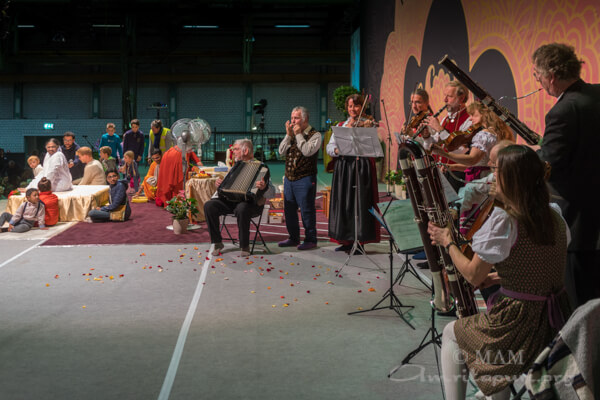 The Zenith Halle where Amma’s program is held was a factory converted into an event space, and Amma’s walk to her room is along a catwalk high on the wall of the main program hall. Thus the devotees are treated to the sight of Amma walking, alone and unencumbered by crowds, and Amma takes her time, looking back and down at all the devotees as she makes her way to her room. At the end of Amma’s walk, applause and cries of Mata Rani Ki Jai! mark the close of the program. This year, the path along the catwalk was adorned with chocolate hearts inscribed Danke Amma in honor of Amma’s 30th anniversary visit. 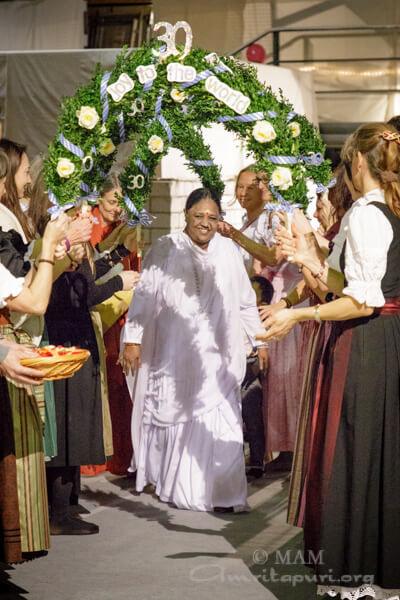 Another highlight of the programs was a traditional Bavarian Maypole dance, in which devotees created beautiful designs with ribbons extended from poles.

Special guests at Amma’s program included Mr. Sugandh Rajaram, Consul General of India to Munich and renowned theater, film and voice actor Rufus Beck. Maria Kriester, who met Amma in 1987 in Austria during Amma’s first world tour, and invited Amma to visit Munich, also spoke on the occasion. She was one of the main organizers of Amma’s programs in Munich for more than two decades. Ms. Kriester said, “How can we thank Amma for this wonderful gift of her love? Words are not enough to express our gratitude. We can only thank her by integrating all the spiritual values that she talks about and that she lives by into our own lives. When we become more selfless in our thinking, when our words are friendly and caring, and when we become more compassionate and humble in our actions. Then, Amma will be content because we have used her presence in the best way. In the name of all devotees in Germany, dear Amma, I want to express our highest reverence and gratitude for keeping us in your eternal embrace. Thank you Amma.”

Mr. Rajaram said, “I would like to, from the heart filled with joy, welcome Amma to Munich and express my deepest respects towards her. For many years, Amma has been a torch bearer of spiritualism and Indian culture all over the world. I would like to take this opportunity to thank Amma from the bottom of my heart for coming to Munich and blessing us.”

Rufus Beck said, “I had the opportunity to spend time with Amma. We laughed a lot together and she was really like a Mother to me. It felt very, very good… Amma is on a journey to touch people and to inspire them to take the first step to change this world for the better with love… Let me greet Amma with a quote by Neil Armstrong, the first man on the moon. He said: ‘That’s one small step for a man, one giant leap for mankind.'”

In her own remarks to the crowd, Amma stressed the importance of being mindful in our interactions with others: “Every single person has hidden trauma and sorrow from their past. We should be careful while judging people. Patience is the greatest power. It awakens goodness in us as well as in others.”

At the close of the celebration of Amma’s 30th visit to Munich, classical musicians led the entire audience in a beautiful rendition of Joy to the World. As the crowd intoned, “Joy to the World, Amma has come,” as a special surprise, multi-colored heart-shaped balloons began to descend from the rafters, first 5, then 10, then dozens and scores. As the balloons reached the crowd below, they began to bat the balloons back into the air, reluctant to let them fall to the ground. The result was that even as balloons continued to descend, the ones that had fallen would rise back up, forming a beautiful dance of hearts, kept afloat by the attention and care of the devotees below. It was a spellbinding display, made all the more poignant by the song that reverberated throughout the hall. And though it lasted only a few minutes, time seemed to stretch, for it was a scene and moment that would not be soon forgotten – a pearl of love and celebration of compassion that would be imprinted in the hearts of all those who were there.