When Amma arrived to the venue, she was greeted with the traditional Swiss horn alphorn as hundreds of volunteers gathered to receive Amma. 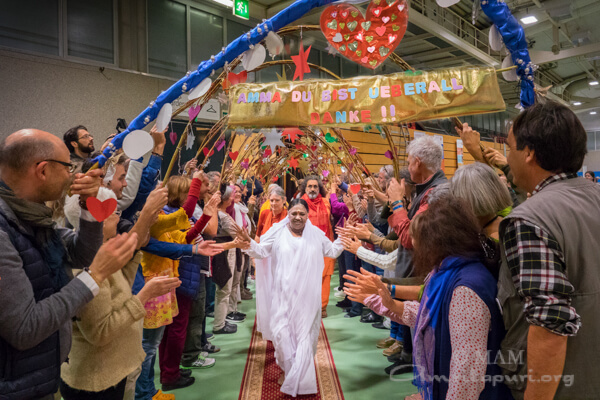 During the two days of programs, gratitude for Amma’s 30 years of visiting Switzerland pervaded the air. In the morning of the first day of programs, Amma walked through a pathway of decorative arches created in celebration of Amma’s anniversary visit. During a ceremony celebrating Amma’s anniversary visit, Theresa Hadorn, head of Amma’s center in Flaach, Switzerland, reflected, “How can we thank Amma for the wonderful gift that she is giving us since 30 years? Words cannot express our gratitude. We can only try to act according to Amma’s spiritual advice that she shows us through her talks and through her very actions, in our own lives. When our thoughts become more selfless, when our words become filled with sympathy and love, and when humility and compassion express themselves through our actions, then Amma will be happy. In the name of all devotees, I thank Amma from the bottom of my heart for the gift that she continuously bestows upon us by coming here every year.” 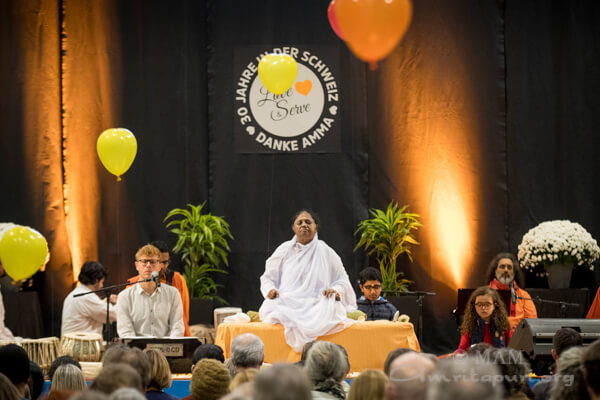 Heidi Furer, president of Amma’s charitable organization in Switzerland, also spoke on the occasion. “When I received the gift of Amma’s Darshan in 1981 in India, this was a  deep experience of endless love and it changed my life profoundly. It made me wish strongly, that all people all over the world should experience that kind of true love and happiness. Since her first visit in 1987, Amma has always visited Switzerland – 30 years without a break! What an unbelievable present! Without a lot of publicity, the events grew bigger and bigger every year. Soon we had to establish an association as we needed now larger halls. Since 1997 we also installed a kitchen, as Amma had wished.  Many of our volunteers felt that we had more strength in working for Amma’s organisation than we usually have. ” 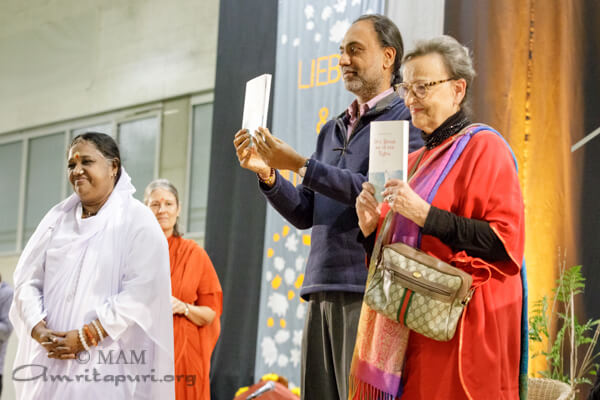 In the evening, Amma was welcomed to Switzerland by Mr. Amandeep Singh Gill, India’s Ambassador to the United Nations on Disarmament and International Security, who shared, “It’s a great honor to be in the presence of a saint, and to speak before all of you. Amma has opened the hearts of tens of thousands around the world and she has shown us how love can bring us together, regardless of race, religion or nationality. Your presence here is living proof of the enormous character of her work.”

Elly Pradervand, Founder/President and Executive Director of the Women’s World Summit Foundation, was also on hand for the event. The Women’s World Summit Foundation recently awarded Choti Kumari Singh, a 20-year-old staff member of Amma’s Amrita SeRVe Self-Reliant Village program, the “Women’s Creativity in Rural Life Award” for her efforts in uplifting the Musahars, the most downtrodden community of the state’s caste-ridden social system {news}. Ms. Pradervand said, “I take this opportunity to congratulate Amma for making this volunteer work financially possible through her Embracing the World initiatives and the other support programs. She is becoming the mother of the heroes we celebrate every year at Rural Women’s Day.”

Also as part of the celebration, people from all four regions of Switzerland dressed in their traditional attire, presented Amma with gifts of food items particular to their region, as a symbol of the entire country coming together to welcome and honor Amma and her message of love and compassion. At the close of the ceremony, Amma presented saplings to three generations of devotees – those who met Amma when she first came to Switzerland, their children, and their children’s children. Finally, devotees throughout the audience raised flags and allowed heart-shaped balloons to rise into the air, creating a beautiful spectacle of love and appreciation for Amma’s three decades of visiting Switzerland.

Fittingly, Amma’s two days of programs in Winterthur saw larger crowds than ever before, even through the night to the end of Devi Bhava, when countless people who had stayed through the night to spend every last moment in Amma’s presence, passed in front of Amma as she showered flowers on each one of them, worshipping the divinity in one and all – for this is where Amma sees God: in each and every person who comes to her. 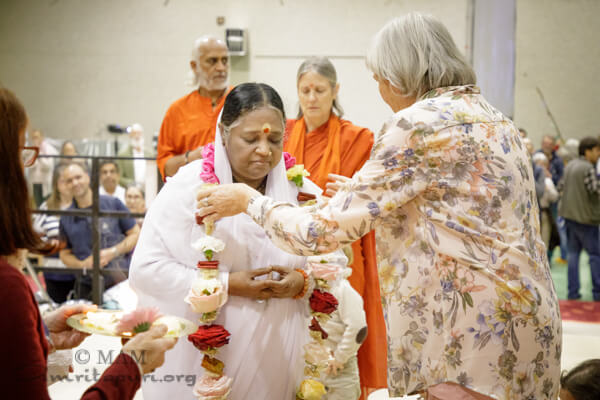 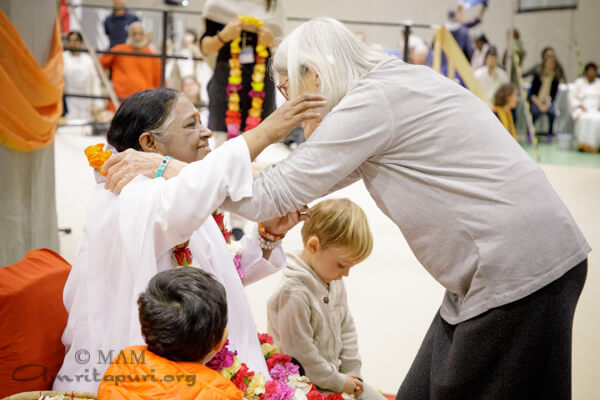 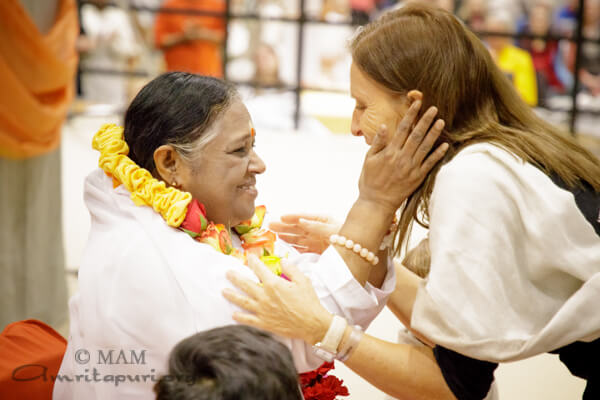 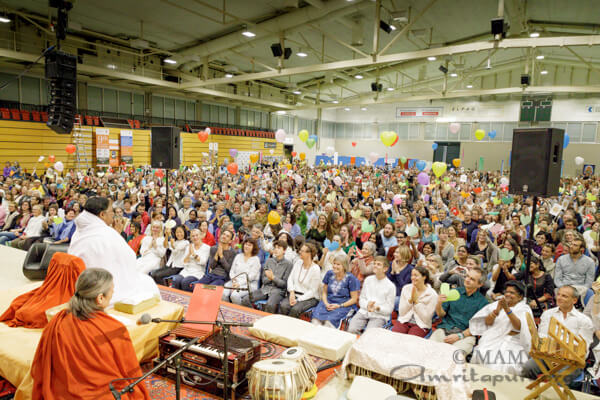 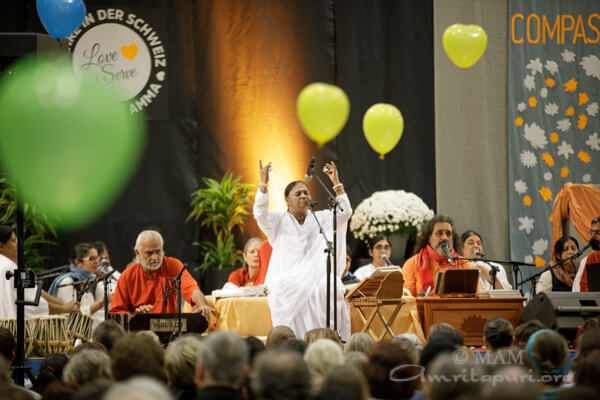 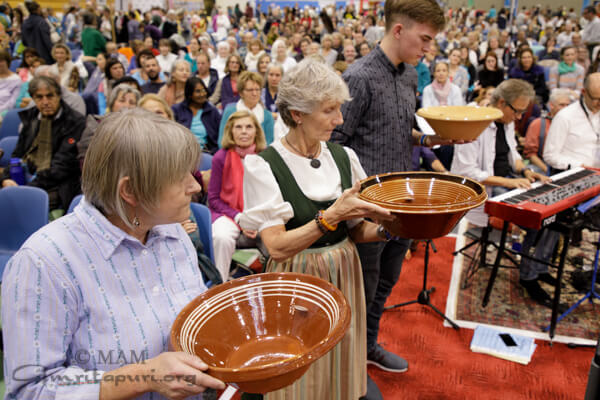 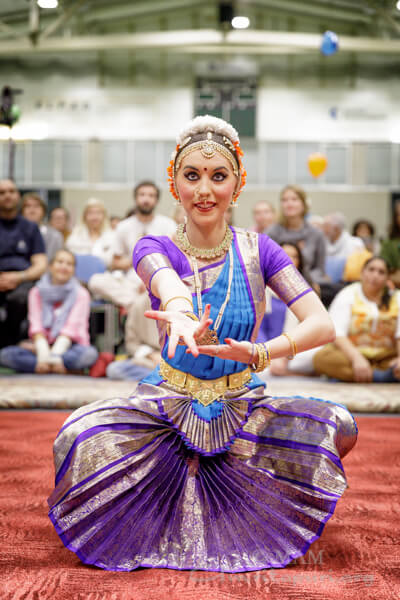 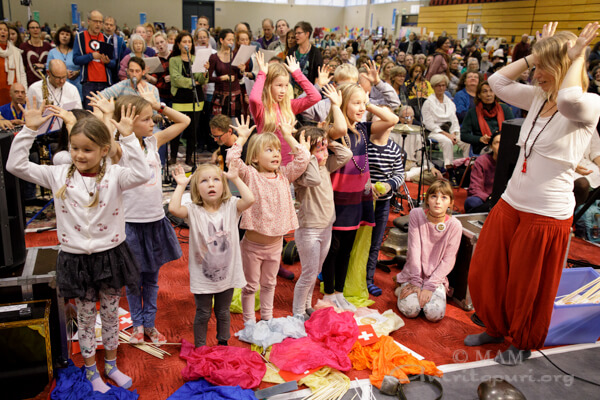 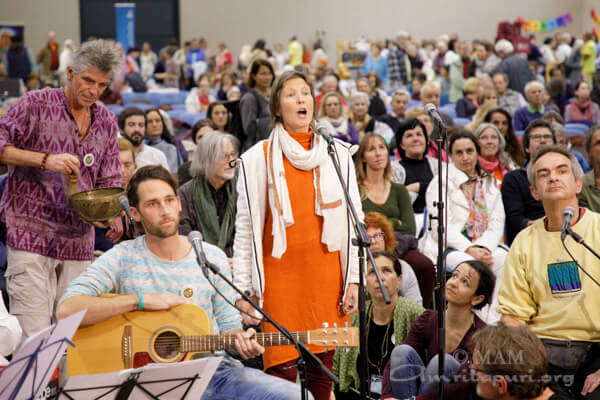 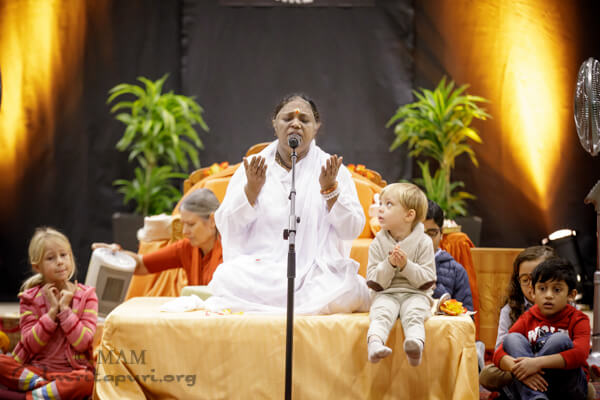 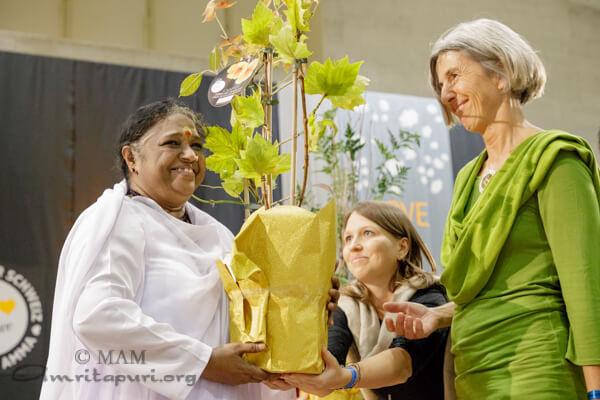 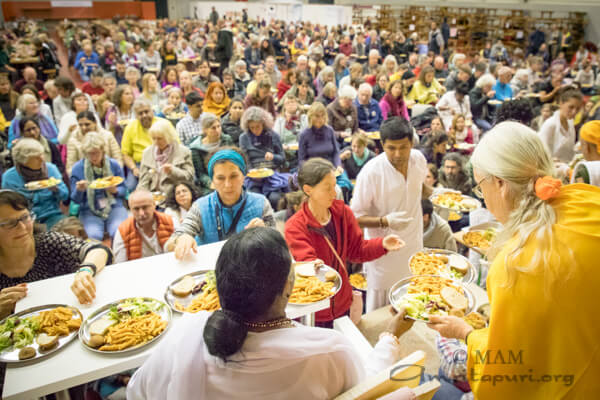 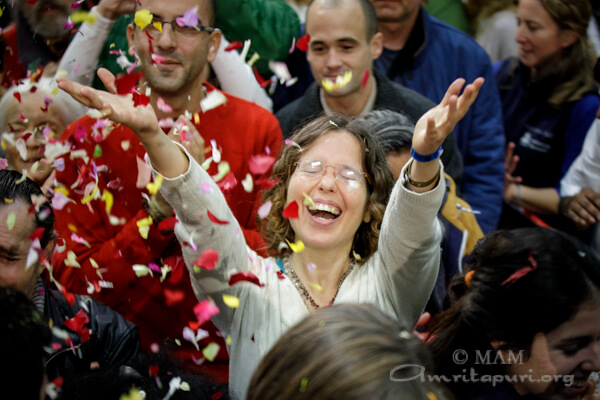