Amma’s disciples and devotees around the world celebrated Guru Purnima on Sunday. In Amma’s presence in Toronto, the celebration was organized by Amma’s senior disciple, Swami Amritaswarupananda Puri. The celebration capped a full day of activities at the Toronto retreat – in the evening alone, Amma held an outdoor meditation, a Q and A session, served a Prasad meal to each retreat participant and led all the devotees in the evening bhajans.  For many of Amma’s children, this is the most important day of the year – a day to reflect on their connection to their Guru, and to show their appreciation and reverence for Amma as the spiritual light of their lives. It is a sacred day, a celebratory day, a day of reflection. 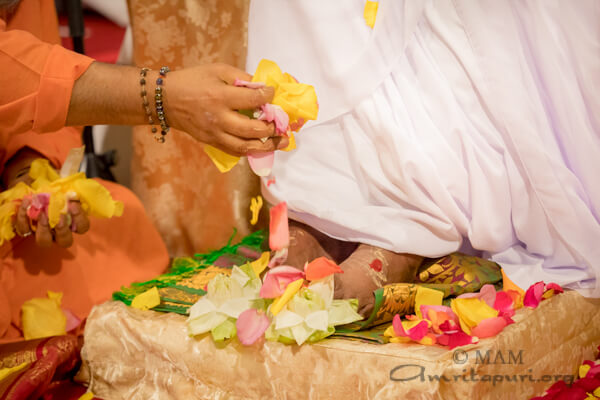 After conducting the traditional Guru Padapuja and leading the assembled crowd in the chanting of Amma’s 108 Names, Swami Amritaswarupananda perfectly summed up the depth of meaning imbued in the day, reflecting [excerpted]: “As the state of God-realization is so blissful and absorbing, it is easy to attain enlightenment and forget the world. Such souls do not care about the millions of people who are groping in darkness. They don’t want to help those who are suffering in the world. A Satguru, however, is different. He or she, purely out of compassion come back to the world to elevate the consciousness of others. Amma, the consummate Satguru, is compassion and meditation in absolute perfection… Amma doesn’t have to declare that she is a master. She proves it – just by her presence. Her irresistible presence itself is the greatest miracle… In a guru-disciple relationship, the most important factor is the trust and openness of the disciple, who is the recipient. The disciple should receive the guru’s instructions in his or her heart. The heart should become like a vessel, a womb to contain the guru’s teachings, because the guru’s advice is not just a cluster of words, but a part of the guru. It is part of the universe. The guru is the universe. Hence, to be a disciple is one of the biggest responsibilities.” 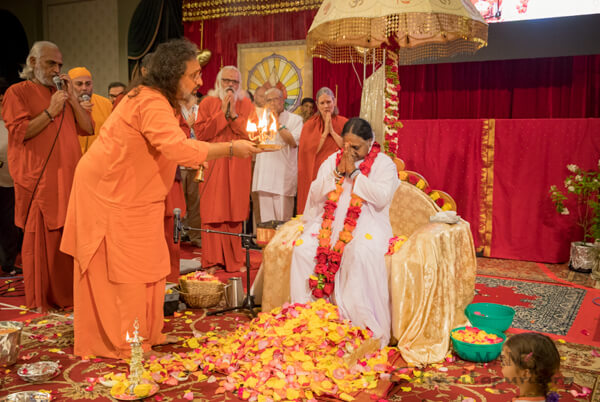 Each of Amma’s monastic disciples, as well as some of the early tour organizers, then offered Amma a beautiful garland, at which point Amma began to give darshan to the devotees. During Amma’s darshan, her 2017 Guru Purnima message, recorded by Amma earlier that day to share with her devotees around the world, was played onscreen. All sat silently and listened to Amma’s message, which was a deep reflection on the nature of both the true disciple as well as the true master, and unparalleled spiritual potential inherent in the relationship between the two [ click here to read more]

Following Amma’s message, hundreds of members of the 2017 North American Tour Staff performed a dance for Amma in honor of the 30th Anniversary of her first coming to North America. The dance was performed in parts, with those who met Amma at five-year intervals dancing in groups together, with a finale in which all the staff and many retreat participants danced together in joyous abandon to the tune of Swamiji singing Mata Rani.

The entire day unfolded as a festival of devotion as Amma’s devotees joined hands and hearts in their resolve to let Amma’s message of love and peace imbue each every action they perform throughout their lives.