“Satsang and spiritual books have the power to turn our minds towards good thoughts. That alone, however, will not enable us to go forward with steady steps. Ordinary physicians will examine the patient and prescribe medicines. But if an operation is required, one has to see a surgeon. Likewise, to rid our minds of all the dirt, and to progress towards the ultimate goal, we have to take refuge in a Guru.” 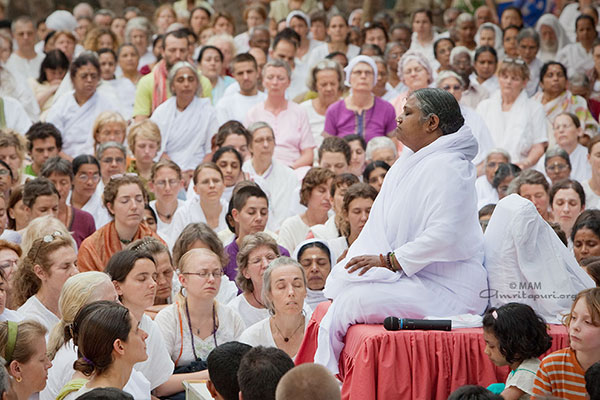 Question: “Isn’t it slavery when one follows the Guru blindly?”

Amma: “My son, to know the Truth, we have to get rid of the sense of ‘I’. It is hard to achieve this just by doing sadhana on one’s own. To eliminate the ego, it is essential to do spiritual
practice under the guidance of a Guru. When we bow down before the Guru, we are not bowing to that individual, but to the ideal in Him. We do it so that we may also attain to His level.

“We can rise only through humility. The seed contains the tree within it, but if it is content to lie in a storeroom somewhere, it will be eaten by mice. Only by going under the soil will its true form emerge. When you push the button down, the umbrella unfolds; it is then able to protect one from the rain.

“Because we respected and obeyed our parents, elders, and teachers, we grew and gained knowledge. They nurtured good qualities and good behaviour in us. In the same way,
obedience to the Guru elevates the disciple to a more expansive, higher plane.

“It is to become the King of kings later, that the disciple takes on the role of a servant now. We put a fence around a little mango tree; we nurture it and raise it, so we can get the sweet fruit later. The disciple shows reverence to the Guru and obeys him, in order to reach the Truth that the Guru represents.

“When we board a plane, they ask us to fasten our seat belts, not to show off their power over us, but for our own safety. In the same way, the guru asks the disciple to obey certain rules,
and to practice restraint, only to elevate him. He does this only to protect the disciple from the dangers that may befall him. The guru knows that the disciple’s ego-driven impulses will cause danger to him and to others. The road is for the use of vehicles; but if you drive your car any way you please, accidents are sure to happen. That is why we are asked to obey the rules of the road. Don’t we obey the policeman who directs the traffic at intersections? We prevent many accidents by doing so.

“When our sense of ‘I’ and ‘mine’ are about to destroy us, we are saved by following the Satguru’s advice. He gives us the training needed to avoid such circumstances later. The very
proximity of the Guru gives us strength.

“The guru is the embodiment of selflessness. We are able to learn what truth, dharma (righteousness), renunciation, and love mean because the Guru is a living embodiment of those
qualities. The Guru is the very life of those qualities. By obeying and emulating him, those qualities take root in us. Obedience to the Guru is not slavery. The Guru’s aim is only the safety of the disciple. He truly shows us the path. A true Guru will never see his disciple as his slave. He is filled with love for the disciple. He wants to see the disciple succeed, even if it means hardship for himself. The true Guru is indeed like a mother.

“Guru and God are there within everyone. But in the beginning, an external Guru is necessary. After a certain stage is reached, one can grasp the essential principles from every object
and thereby progress. Until a boy becomes aware of his goal, he studies his lessons out of fear of his parents and teachers. Once he becomes conscious of his goal, he studies on his own accord, foregoing sleep and enjoyments like going to the movies. The fear and reverence toward his parents which he had until then was not a weakness. Children, when the awareness of the Goal dawns, the Guru aspect within also awakens.”

Question: “Amma, who is greater, God or the guru?”

Mother: “In principle, God and the Guru are the same. But we may say that the Guru is higher than God. The Guru’s grace is something unique. If the Guru wants, he can remove the effect of God’s displeasure. But even God cannot remove the sin that comes from dishonouring the Guru.