Amma held a two-day Brahmasthanam Festival at Kochi. She arrived after her programs in Singapore. Upon arrival, Amma was received with Poornakumbham and the Vedic chanting of Amrita University students.

Kochi Mayor Saumini Jain was there to welcome Amma and offer her tributes. 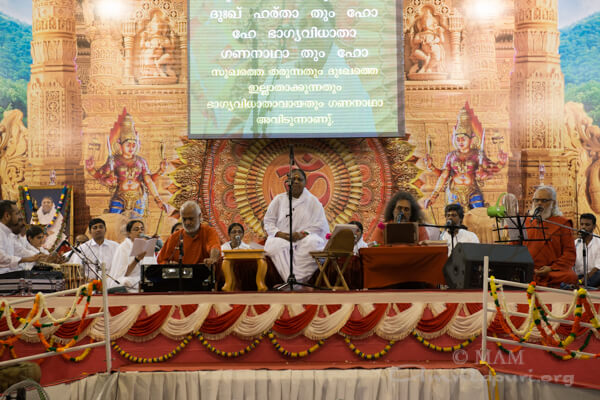 Two of the people who came for Amma’s darshan were very special.

Abdul Rahim, who lost his hands while working to defuse a landmine {news} and Manu, who both his while trying to defend a woman from an attack  {news}– both were given new hands by Amrita Hospital’s plastic surgery department. Fully recovered and with strong hands, they both hugged Amma. Hailing from Afghanistan, Abdur Rahman says he is in love with India and Amma. He says he will bring another 1,000 people to Amrita for treatment.

Students of Amrita Vidyalayam and Amrita University presented different and entertaining cultural programs. Even the teachers had their part, staging a Kali dance.

On both program days, Amma sang bhajans and gave satsang and darshan – each day’s program beginning at 6.30 in the evening. At the end of the 2nd day’s program, Amma sang a Holi song. The darshan came to an end at 9.04 am the next day. Despite the scorching heat even in the evening, huge crowds attended on both days to enjoy the cooling presence of Amma’s love.