7 April, Vrindavan, Uttara Pradesh – Bharata Yatra 2016
As if to make up for lost time, Amma’s first visit to Vrindavan in nearly 30 years was packed with activities and events for both Amma and the tour group. Immediately on arrival on Thursday, Amma was taken directly to a sacred body of water known as the Brahma Kund. With shobayatra – nama-smkeertan and folk art forms in a procession – Amma was welcomed to Brahma Kund where she had been invited to bless the spot and to view an ancient form of folk art known as Sanjhi*, started by Radha Rani.

Many of the residents of Amritapuri ashram who had not been able to join Amma’s full Bharata Yatra made the pilgrimage to Vrindavan to be there with Amma, so one really had the feeling that all of Amritapuri had been temporarily transported to Vrindavan.

That evening, to the delight of all, a special Rasa Lila performance was staged in Amma’s honour, re-enacting scenes from the early life of Sri Krishna. The enchanting performance included a re-enactment of the young Sri Krishna mischievously stealing butter from the gopis, in the process stealing their hearts and leading them on the first steps of their journey toward the pinnacle of devotion. The witty and wise dialogues and heartful rendition of the music transported all into a different realm of experience.

The artists of the play are not professional, but ordinary people. The people of Vrindavan believe that, during the time of the play, they are the real Radha and Krisha. They feed Krishna and do arati and take prasad from him. For them this is Krishna in flesh and blood.

Introducing the importance of this tradition, Vineet Narayan, host and Chairman of the Braj Foundation narrated a story of two sanyasis from Varanasi who follow the path of Knowledge. The junior sannyasi came to explore Vrindavan despite senior sanyasi’s resistance. Here he got immersed in bhakti and started enjoying the chanting of Radhe Radhe, begging bread from homes irrespective of their caste and watching Raasleela being performed.  6 months passed. The senior in anxiety also came to Vrindavan to look for his junior and was shocked to see how he had fallen from his strict Vedic practices. The senior scolded the junior, admonishing him that his duty is to follow Vedic principles and not indulge in emotions of bhakti.  The junior sanyasi explained the transcendental mood of people of Vraj, but the senior was unmoved. However he did agree to attend a Raasleela performance, where he sat in the back row along with the junior sanyasi. During the performance, he whispered in the ear of the junior, “If that is the real Krishna up there on the stage, he will come down and give me his garland.” Whereupon the Krishna on the stage did indeed come down from the stage, walk all the way through the crowd, and place his garland on the neck of the senior sanyasi. Still not convinced, that night in his chambers the senior sanyasi thought to himself, ‘I must have whispered too loudly and he heard me from the stage. If it is really Krishna there on the stage, tomorrow night he will give me his betel leaf when it is offered to him.’ The next evening, when the curtains were closed for a set change, suddenly Krishna emerged from behind the curtain, again made his through the crowd to the sanyasi, and proclaimed loudly for all to hear, “This greedy fellow – it was not enough to get my garland. Now he wants my betel leaf as well!” Whereupon the senior sanyasi was also overcome with devotion for Sri Krishna and finally understood the junior sanyasi’s feelings. This story is just one such example of countless miracles people have seen performed by Krishna on the stage – and that is why it is said that the Raasleela being performed in Vraj is not merely a folk theatre but Krishna, Radha, Gopis and Gopas all descending into the young people enacting these plays on the stage.

After the performance was offered to Amma, little Krishna came down off the stage and sat in Amma’s lap, resting his head against her cheek in a touching sight that was rendered all the more significant by the fact that it was unfolding in the very place where Krishna’s childhood leelas happened so many centuries ago.

Speaking on the occassion, Amma related a beautiful incident from the time of the gopis: Once an astrologer visited Vrindavan. He asked the birth date of Gopis whom he met there. Every one gave the same date — only the birth time was different. Gopis of all ages – young and aged – all reported having the same birthdate. He could not believe it. When he asked why everyone has the same birthday, they explained that that was the day when they met Sri Krishna when he came to Vrindavan. Only the birth time was different, because they met him at different times throughout the day.

Amma then sang two Krishna bhajans, and finally asked everyone to stand up and dance. As each of the several hundred devotees present closed their eyes and danced, each one imagining they were dancing with Amma, one couldn’t help but feel that all these many years later, the Rasaleela was once again unfolding in the holy land of Vrindavan. 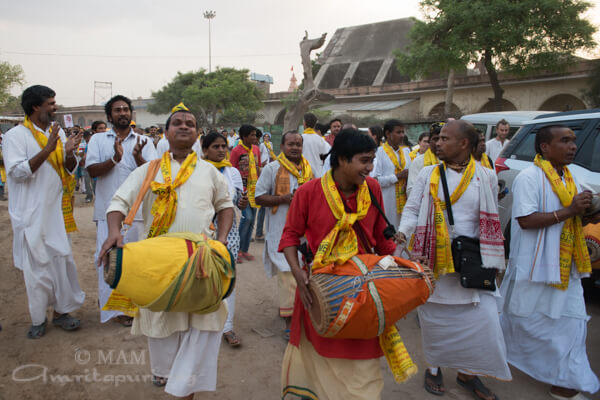 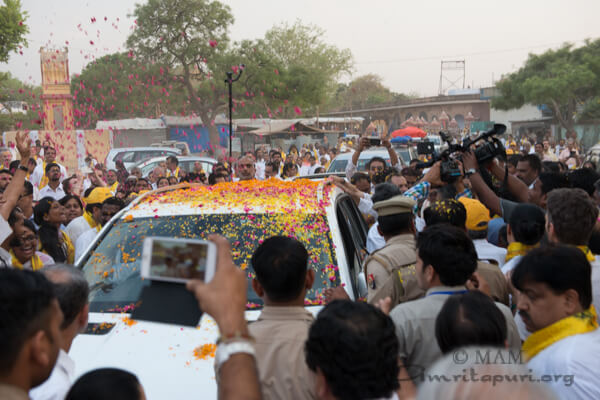 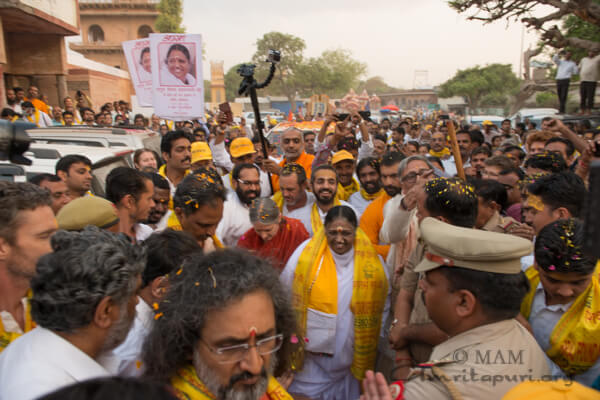 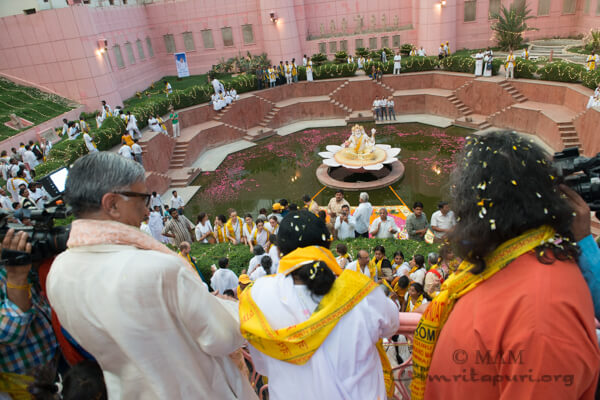 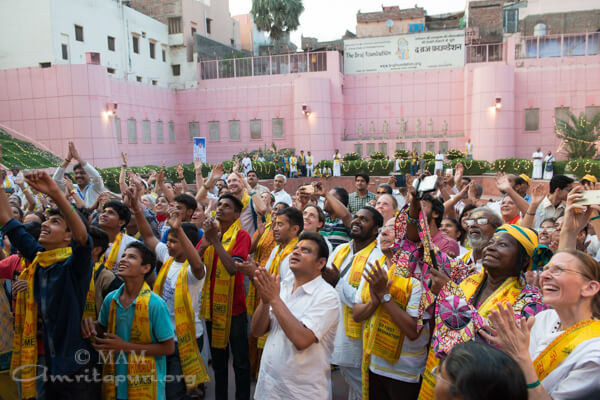 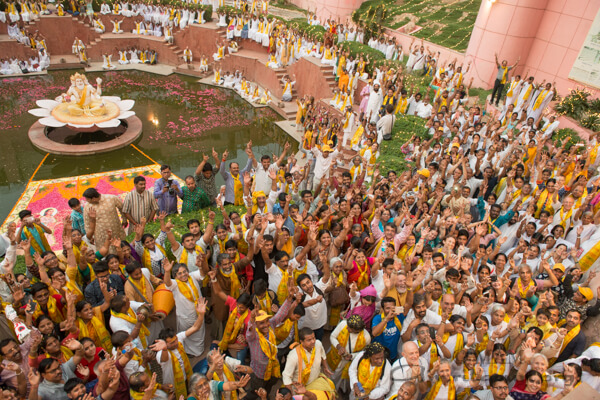 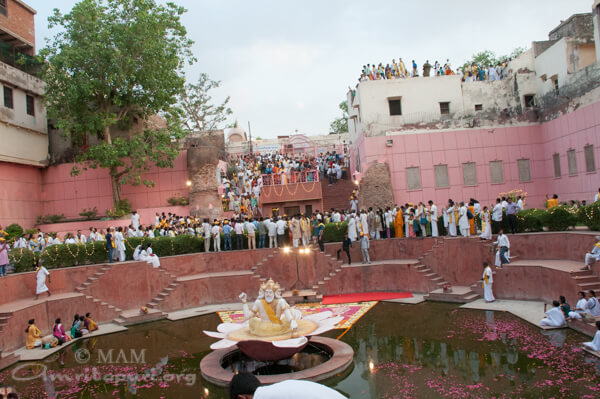 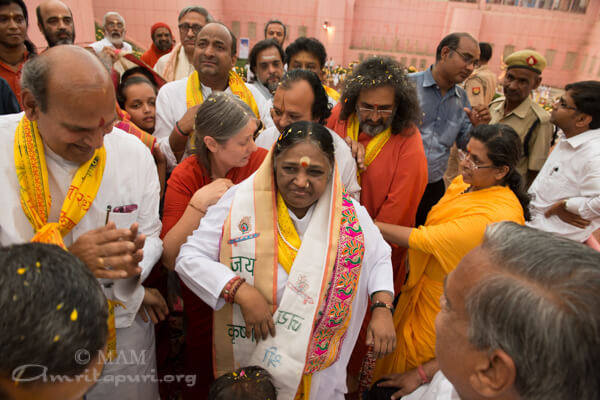 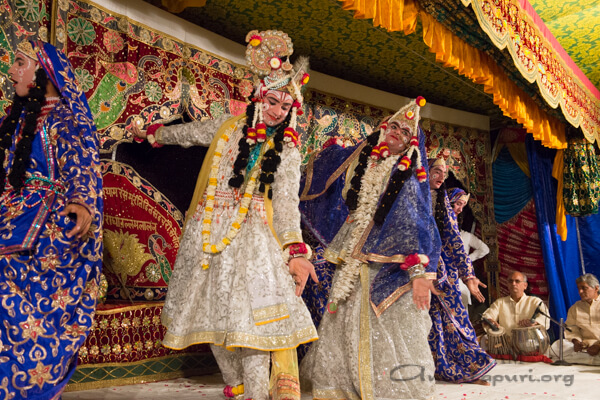 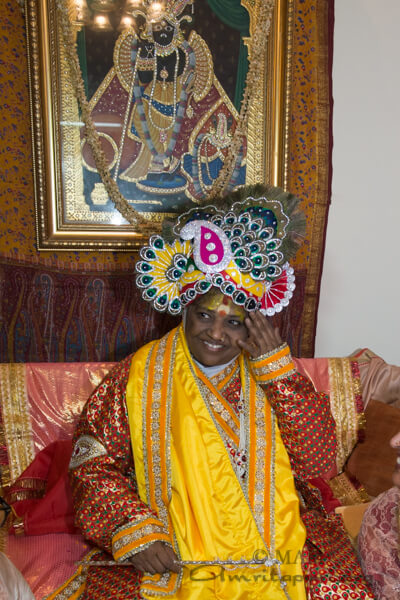 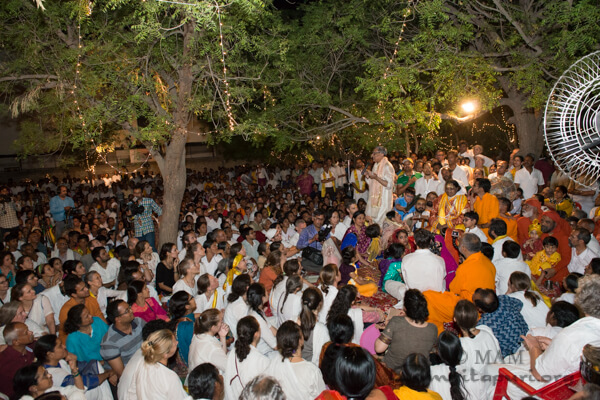 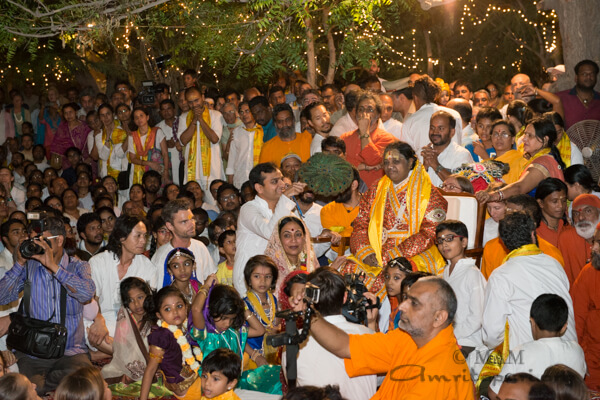 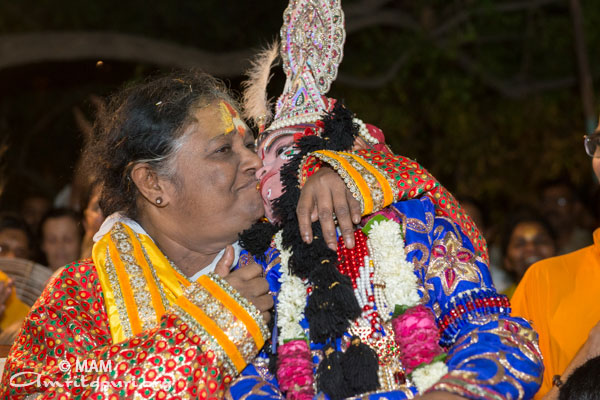 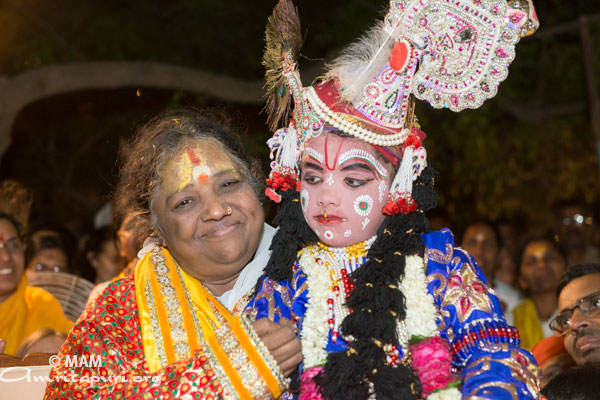 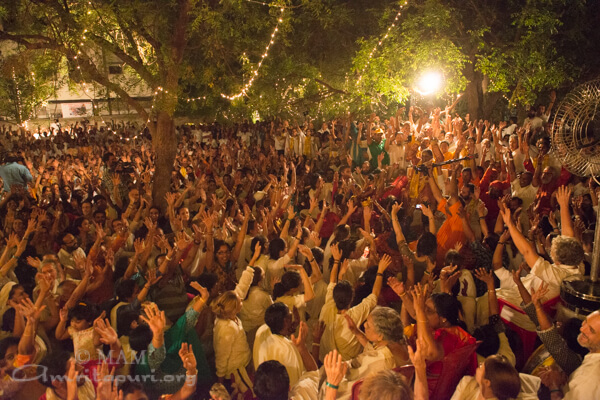 ===
* Sanjhi art
Pitra Paksh is the fortnight period when Hindus remember their departed family members and offer special prayers for them. In such a gloomy atmosphere, no entertainment is encouraged.

However to please Krishna, Radha Rani and her friends decided to decorate the path of Krishna returning in the evening after grazing the cows. They used colored powder, flower petals, cow dung, grains, lentils, dry and fresh fruits and seashells etc. as raw material and everyday created patterns on the floor or water surface to please Krishna.

Since this was done in the evening (Sandhya), it is called Sanjhi art. This Folk art was lost for centuries after Krishna’s time. But in the 1770s, it was revived by a saint, who was a former king from Rajasthan. He started a Sanjhi Mela at the Brahma Kund in Vrindavan.