During a question-and-answer session in Amritapuri, Amma was asked about the best way to chant one’s mantra.

QUESTION: Amma, I like to chant my mantra aloud. I feel a lot of love and devotion and enthusiasm when I do that. But when I do the same by just moving my lips (without any external sound), I don’t get the same amount of concentration and I don’t feel the same amount of love and enthusiasm. Since you are my Guru, I would like to guide me as to which is the best way to chant my mantra. 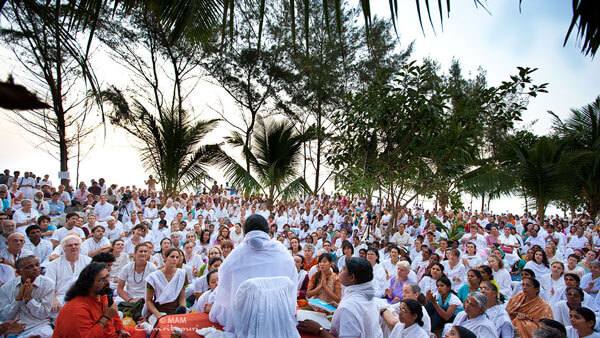 Amma: “When we chant slokas (hymns or prayers), we can surely chant them aloud there is no harm in it. But when we are chanting mantras that have bijaksharas (seed sound syllables), then it is advised not to chant such mantras aloud. It is better to chant such mantras by merely moving the lips (with no external sound).

“Suppose you are alone at home, then you can surely chant your mantra aloud. There is no harm in it. Or you can close your prayer room and chant it aloud. Suppose you are living alone, and there is nobody else listening to you, then also, you can chant the mantra aloud. For some people, that may give more concentration. Some students love to read their lessons aloud, whereas some like to read it silently without making any sound. Some get better concentration when they read it silently. It varies from person to person. In general, if there are people around you, then it is better to chant the mantra by just moving your lips in the initial stages [later, one will not find it necessary to move the lips but can just chant the mantra inwardly].

“In olden days, the Guru wouldn’t give mantra initiation so easily. They would go by Adhikari-bheda before initiating them into a mantra. That is, they would see if the disciple was prepared to take up the practice of mantra japa. Some children have a talent for singing from a very young age. Once they are trained by a music teacher, they can easily become an accomplished singer. But with Amma, when it comes to mantra initiation, she has never looked into the adhikari bheda – otherwise none of us would be here in the ashram [everyone laughs]. Amma gives mantra initiation to whoever asks for it, with the hope that at least that person will chant this mantra for some time, if not forever. In that way, there will be at least some benefit. That is all Amma cares for. 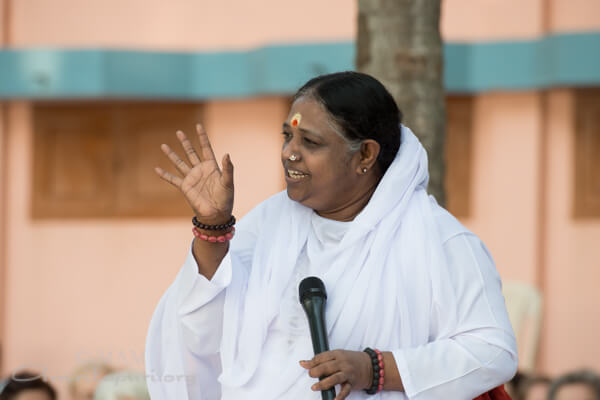 “When Amma gives a mantra which has a bijakshara, then there are certain instructions that need to be followed along with it. A mantra with a bijakshara has to be heard from the Guru’s mouth directly. One has to be initiated by the Guru. That is what in fact brings about a change, a transformation in the disciple.

“Here (in India), a little of yogurt is added into milk at night, and by morning the milk becomes fermented and is transformed into yogurt. Similarly, when you get a mantra from a Guru, it is like adding yogurt into normal milk. When you don’t get it from the Guru and you try to do it on your own, then it is like milk converting into yogurt by adding some other materials for fermentation; in such cases, the quality of the yogurt may be less.

“We all have the Truth in us, but we are not able to see it because our minds are contaminated. When we say, “water is hot,” the heat can be of various degrees. It can be 10 degrees, 20 degrees, 30 degrees, or even 100 degrees boiling water. In 10 degrees, the micro-organisms may still be active, but as the temperature increases, the amount of micro-organisms decreases. A real Guru is completely pure, 100% pure, and thus whatever comes from Him has the power to create a transformation in the disciple as well. When a Satguru gives a mantra, he or she is infusing his/her energy into us, and that can create a change from within us.

“In the initial stages of our sadhana (spiritual practices), we feel a lot of enthusiasm. At the same time there are certain do’s and don’t’s which we need to follow, so that we are able to stay focused on the spiritual path. Let us say you are the owner of a new vehicle and you start driving it. Initially you may not be able to drive it in high speed because there is a speed lock. Only after driving it for a given amount of kilometres can you really take it to a higher speed. If you have a mixi (grinding machine used in kitchen), and you continuously keep the mixi on, the motor is going to burn out. You have to switch off the mixi once in a while, so that the coil of the mixi is not burnt. Those who have the understanding of spirituality, who have read spiritual books and have proper guidance – such people know about all the precautions to be taken, but others surely should not go too overboard without taking the right precautions. A health tonic has a certain prescribed dosage beyond which it can be quite harmful, and the dosage is different for children and different for adults. If you gulp down the whole bottle of tonic thinking it is tasty, then instead of doing good it will only cause you harm. Similarly, when doing spiritual practices like meditation, you may be very enthusiastic about it, and you may think, “Let me meditate for hours together.” Now, if you are not really ready to meditate for hours together, then doing so can lead to many problems. Your head can get heated, you may not get proper sleep, your digestion can be affected, etc. For some people, such uncontrolled spiritual practices can even lead to depression and similar unhealthy conditions. So one must approach meditation in a very progressive way – slowly and steadily.

“One should increase practices little by little, and not do too much straight away. In the initial phases, it is good to meditate for 20 minutes or for half an hour. Once you are comfortable with it, then you can consider increasing it slowly. One should not force the mind into meditation for hours together . It has to be done gradually. When we start doing our practices, it is important to have the right guidance. Those who don’t have samskara (spiritual culture) absolutely need this guidance from a Guru. It is like a student doing practicum in the laboratory. The student needs to have the professor nearby, instructing the student on how to use the chemicals, how to conduct the experiment in the right way, and what the precautions are that need to be taken. The Guru guides us as to what should not be done initially, and what can be done in the initial stages. The Satguru knows what is the best for the disciple and advises each one accordingly.

“When a Satguru gives a mantra, it is always safe for us. It is like a fragile item such as glass that is shipped with proper packaging around it. Even if such a package falls down, the item inside won’t break, because of the proper packaging. A mantra from a Guru is like that – it is always safe. Taking mantra from the Guru-mukha (uttered from Guru’s mouth) with bijaakshara, is like getting a package that is properly wrapped, and even if it falls down, it will not break. Getting such a mantra from some other source is like having a very fragile object which, when it falls down, will crack into pieces because it doesn’t have any protection around it. That is why a bijaakshara mantra should always be taken from a Satguru, if one wants it to have the proper effect.””