Amma was invited to inaugurate the 100th anniversary celebrations of “Arayavamsha Paripalana Yogam”, an organization which was founded to uplift the fishing community in the local area of Alappad.  A special function was held on this occasion, just a few kilometers down the coast from the ashram. 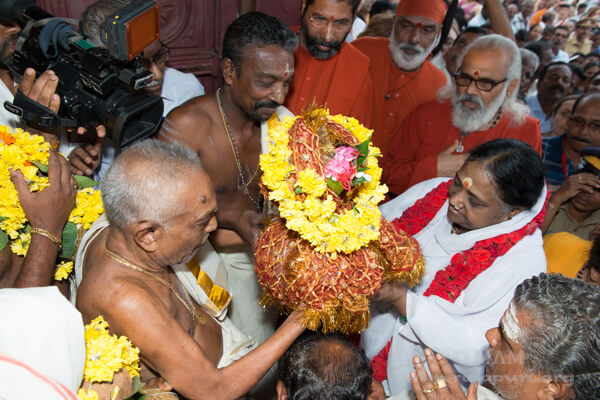 Amma was welcomed to the event with firecrackers, Vedic chants,‘ talappoli’ and ‘poorna kumbham‘. Upon her arrival Amma visited the local temple, offered ‘dakshina‘ and did arati to the murthi (idol in the shrine).

From the temple Amma walked to the programme site, passing long lines of ladies who were standing on both sides of her path, holding lamps and flowers. Upon arriving on the stage, the Panchayat President Rajapriyan welcomed Amma, saying “We are proud that after Veda Vyasa, who also came from a community of fishermen, Amma has come to help the world. With pride I say that we are living with Amma. Earlier, we didn’t recognize her divinity. It took time for us to understand. The one who was born here as Sudhamani has grown to become Krishna, Devi and now as the consciousness which embraces the whole world.”

“Today she is with us. Even when the tsunami tragedy took place, Amma went without sleep and food and worked for us, stood by our side. It was like in the Bhagavatam, when Indra attacked Gokulam with heavy rain and Krishna lifted Govardana hill and kept himself awake for 7 days to save everyone from the deluge.”

“Surely we have grown out of this ignorance now and have come closer to the truth. We know that Amma is always with us.” His words were welcomed by the crowd with thunderous applause. 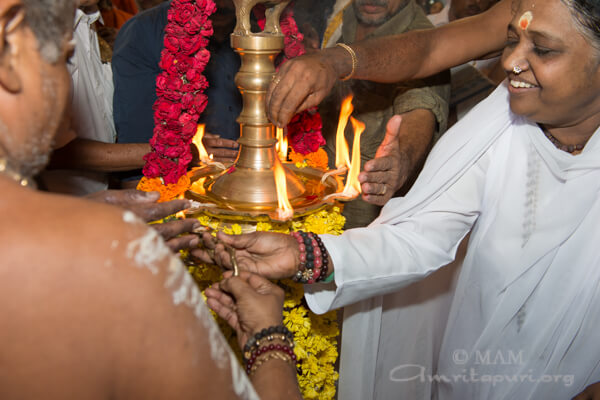 Amma inaugurated the function by lighting the lamp amidst Vedic chanting.
Speaking on this historic occasion, Amma said, “Today,  this organization celebrates 100 years of giving direction to the material and cultural growth of the people in this area. Amma is overjoyed that she is able to take part in this historic occasion. This is a celebration of unity and sharing. Amma prays that this unity amongst her children endures forever. The strength of a structure is not just the bricks. It is the cement that holds them together that makes the structure solid and secure. In a similar way, the strength of any organization is in the unity, mutual love, and selfless actions of its members. That is our wealth. All of you should take care to preserve this mutal love and unity.”

Amma also shared some of her childhood experiences with the crowd in the overflowing auditorium, recollecting the dharmic ways of life of the previous generation and the need of preserving those values. She concluded the program by leading a manasa puja and prayer for peace.

The warm welcome Amma received at this gathering called to mind the reception she received after returning from addressing the United Nations Millennium Summit {news}, where Amma’s address represented the first time Malayalam had been broadcast in the General Assembly Hall {news}.  Then as now, the villagers expressed their pride at their connection to Amma who had grown up in their midst. It took Amma four hours that day to drive the last seven kilometers to the Ashram, with each household having lit a lamp to welcome her home. {news} And then as now, it was clear that the people of the fishing community of Alappad have taken Amma into their hearts and count her as their very own Amma.