“Is there a white horse?” Amma wanted to know. She was walking around a horse ranch in Odenwald, Germany, a property where many Ashram retreats have been held. The morning was bright and clear, the air was quite cold, and Amma was wrapped in a pink hooded winter coat. Soon, Vineeta, a young German woman who works at the horse ranch came leading a beautiful white horse by the reins. 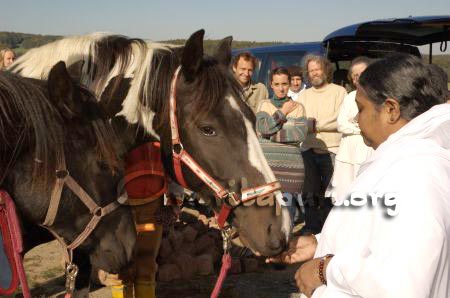 She led it up to where Amma was, and Amma began feeding the horse carrots and pieces of dry bread. Steam issued forth from the horse’s nostrils as it ate from Amma’s hands. About 40 devotees were gathered around, taking in another precious memory of time spent in the presence of the Guru.

Unknown to all, Vineeta had a special place for the white horse in her heart.  She had been praying that Amma would come and shower her love on this one in particular, and now Amma had answered her prayer. Then, suddenly, Amma said, “No, we shouldn’t show partiality to this horse. Bring all the horses.” 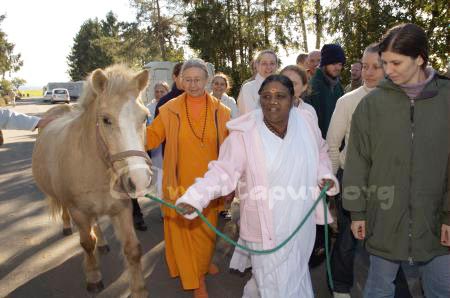 So, next a small tan pony was brought to Amma, and she fed that one as well. Then Amma went to a fenced off area on the east side of the ranch and there fed a tall black stallion and two brown mares. Another pony was soon brought, this time a black one. The horses snickered and brayed, each one trying to nose in towards Amma’s hands to get her treats.

Situated on the break of a hill, the horse ranch provides a beautiful view of the surrounding village and the green pastures where the horses are allowed to run. Everyone looked out at that tremendous expanse, taking in its splendor.

“Amma, there are more horses down there,” someone said, and soon Amma was walking off to the east side of the property where more horses were kept. The ranch keeps eighteen horses in all. There, Amma rested against a wooden fence, and fed those horses carrots and pieces of bread from her hands.

After Amma fed all of the horses, she went back inside, where she sat and distributed bread, jam, and pieces of banana–this time to the devotees.

“Last night, Amma thought she would spend the full day here with you,” Amma said to the devotees, explaining that she did not know that she would have to leave as early as noon for her flight to Finland. “Amma had planned to serve lunch, sing bhajans and go for a walk with all of you.”

Then someone half-jokingly asked, “And give liberation too?”

“Everything Amma does is for that only,” Amma said. ‘Chittachora’ is one of the names of Lord Krishna. It means ‘One who steals the mind.’ This is what Lord Krishna did with the Gopis of Vrindavan. By spending all his time with these milkmaids, playing with them, joking with them, stealing their butter and milk, what he actually was doing was stealing their hearts. This is what Amma is doing when she spends time with all of you. She is putting a special pearl deep inside of you, so that you will remember Amma everywhere you go, whatever you are doing.

“Normally when we begin a long, hard task, we will be tense the whole time. The only peace we get is when we think; ‘I will get rest once the task is completed’.  By providing the devotees with memories, deep inside they will always be thinking of me no matter what they are doing.” Amma added that such thoughts–the moments when the disciple thinks of being with the Guru–are moments of peace and rest. 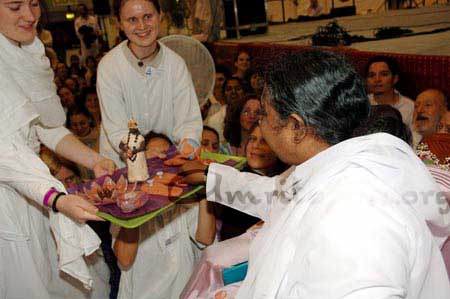 “At the heart of all religions is the Guru-disciple relationship. It doesn’t matter whether it is Islam, Christianity, Jainism, Buddhism, or Hinduism,” Amma said. “In reality, this relationship is the relationship between the jivatman and paramatman, the individual self and the Supreme Self. In truth, they are one and the same. When standing on the shore, a river appears to have two separate banks, but in reality those two banks are one and the same at the bottom of the river. Once we remove the water (the ego), we will realize this truth.

Then it was time. Amma had to go to Finland. As Amma drove slowly off the grounds, it was a scene just like when Amma leaves Amritapuri in Kerala. Amma rolled down her window and held her hand outside the car so it could brush past the hands of all the devotees who had lined up along the driveway as she drove away.Now that Amma had visited the ranch, everywhere the devotees look, they will see beautiful pearls – memories of Amma’s visit. Will they be ever able to look at the horse without thinking of Amma? They have their clear instructions: Do selfless service thinking of Amma, and remember always that you and Amma are not two, but in essence one and the same.”