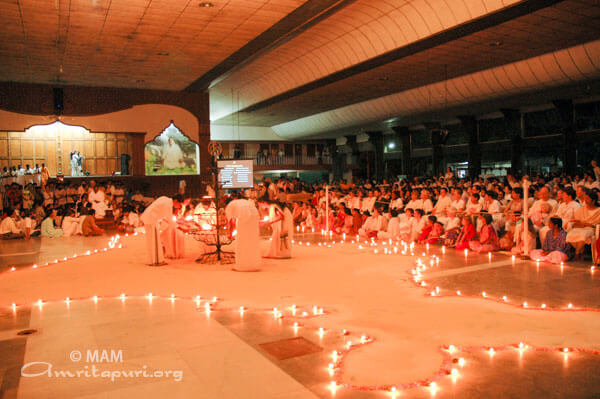 So it was very fitting that at Amritapuri, the 58th anniversary of India’s independence began with a puja to Bharat Mata—Mother India. Performed by students from Amrita University for India’s mahatmas, sacred scriptures, freedom fighters and future, the puja took place in the bhajan hall, using small clay oil lamps to define the geographic boundaries of India. The students then went on to present short plays and classical and modern dances before Amma.

When the programmes ended, Amma addressed the students, telling them that she was so happy that they had gone out to plant trees along the coastline and to help with the tsunami rehabilitation construction. “It is this attitude of service that Amma desires from you,” Amma said. “Amma is not able to express her appreciation in words, but she bows down to the selfless attitude in your hearts.” 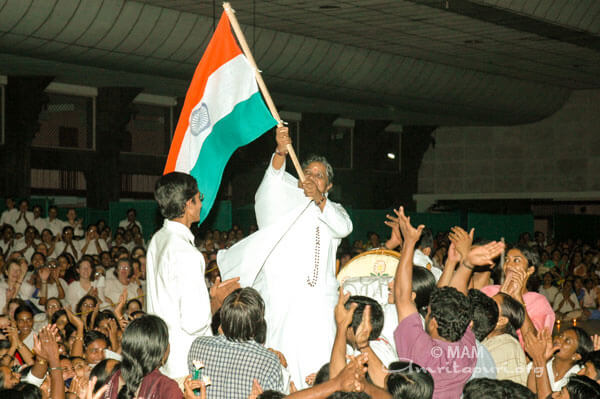 Amma then spoke about the current situation in India, in Kerala and in the world.

“In our efforts to achieve many great things, we are losing what we had,” Amma said, referring to how modern life is seeing society sacrifice love, family and dharma for its pursuit of materialistic gains. “The values that make our country ‘Bharat’ are wasting away.

“In terms of development, our small state of Kerala is far behind, but in terms of accidents, suicides and rapes, it is number one. In colleges these days, drunkenness and intoxication are the in-thing. Kerala is also in the front in terms of diabetes and heart disease. The ponds, pure water and sacred groves for which Kerala was once famous, today exist only in stories. Many of our art forms are also disappearing. When Swami Vivekananda visited Kerala [1892], he compared it to an insane asylum. He said it because of the extreme segregation practiced here in the name of caste. But now our insanity has two more dimensions—lust and the craze for money.”

Amma then spoke about “freedom” in the modern world, saying how during her 18 years of world tours she has witnessed so many things in the West that are considered taboo in India. For examples, Amma said that in the West people are free to change the colour of their hair to any one they like; they are also free to change their boyfriends or girlfriends every week; they are free to divorce at any time they like; boys are free to marry boys and girls are free to marry girls; men can even become women, and women can even become men. “They have so much freedom,” Amma said, “but they still are not happy.”

“What is freedom?” Amma then asked. “Where do such liberties take us? We have to cultivate freedom within—only then can we make this world beautiful, inside and out. The real freedom is inside.” Amma reminded the young students that the ability to retain our equanimity of mind in all circumstances is what is needed to be successful in life.

Amma continued: “On Independence Day, we praise Gandhiji up to the heavens, but the values such as truth and ahimsa [non-violence], which he cherished more than his own life, we are neglecting in almost every field. He was not speaking these ideals; he was living them. 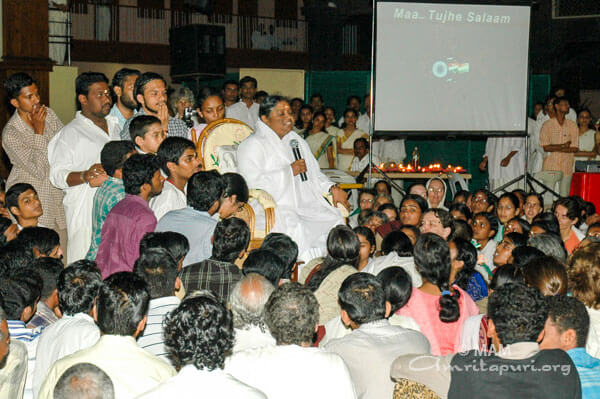 “When will we experience freedom? Only when we are able to experience the pain of others, only when our hearts are throbbing to console others when they are in pain. Only then will India be truly independent.”

Amma then told the students that everyone has a responsibility to the world, which has supported and nurtured us, allowing us to reach our current state. “The Earth is our mother,” Amma said. “Nature is our mother. We should not forget our duty towards our mother. We should not fail to lend an ear to the cries of our brothers and sisters. Even if you are not able to give them money or employment, give them a smile, a loving word and a compassionate look. This will make your life and theirs blessed. What we have taken from life does not determine life’s value, but what we have given. If we are able to remove the sorrow of another being—even for a second—we are blessed.”

Amma ended her talk by asking the student to take a vow to a life of service. She asked them to plant saplings, saying how it is such a blessing to do so, because trees outlive us and will provide fruits and shade to the coming generations. She also implored young people in general to give the money they are using for cigarettes and intoxicants to charities, such as orphanages and old-age homes, where it can be used to buy clothes and medicine. “If everyone does like this, there won’t be poverty in this country.”

When Amma went to her room, everyone lined up along her pathway. The devotees—both from India and from the West—held small Indian flags in their hands. They waved their flags at Amma—one who is absolutely free, independent in the deepest sense of the word. 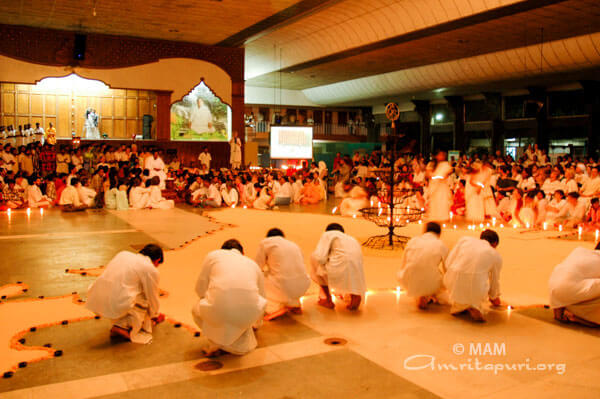 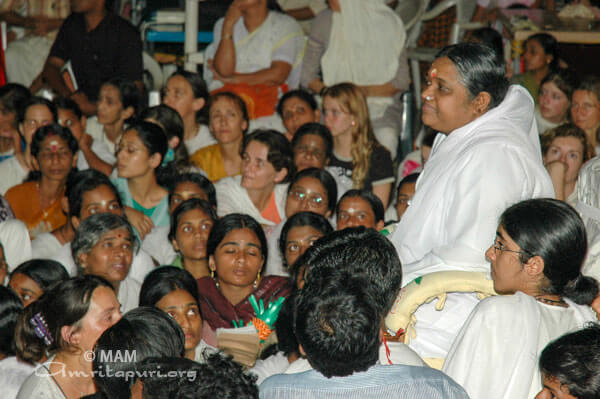 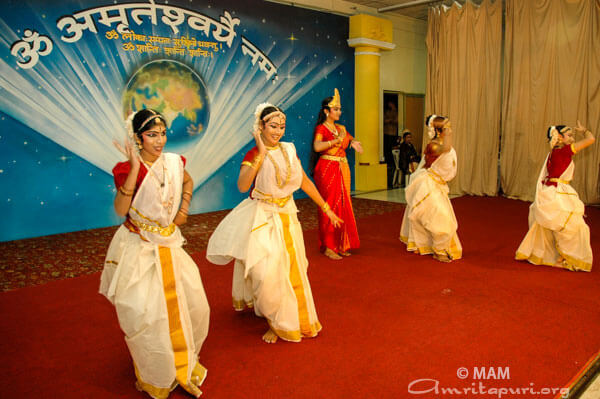 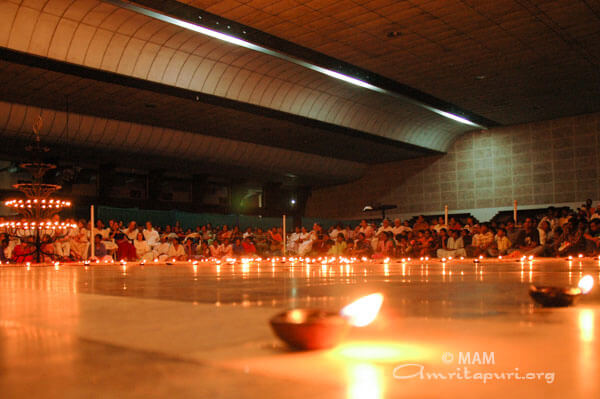 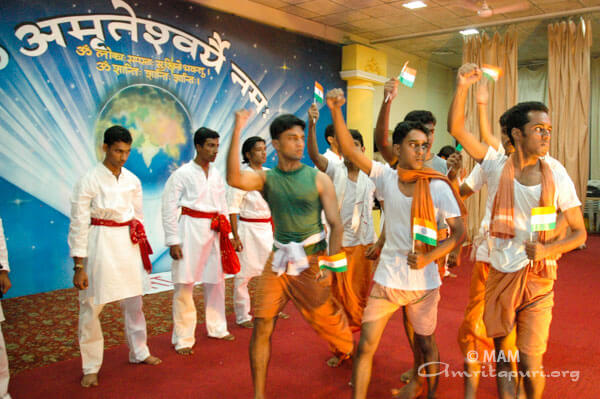 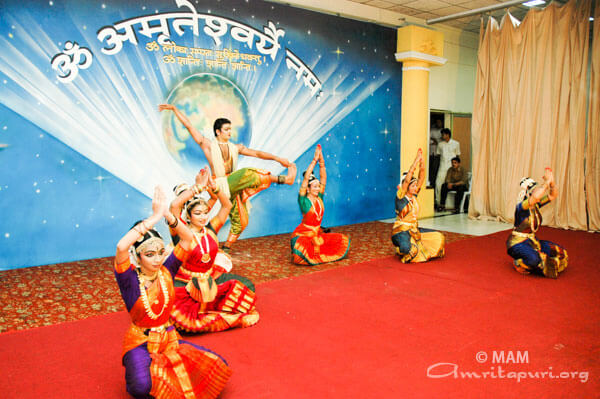 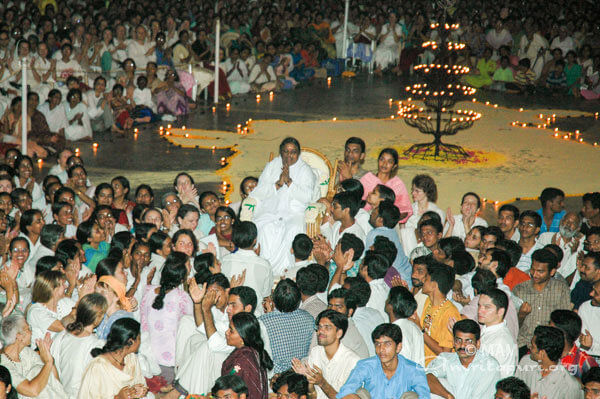 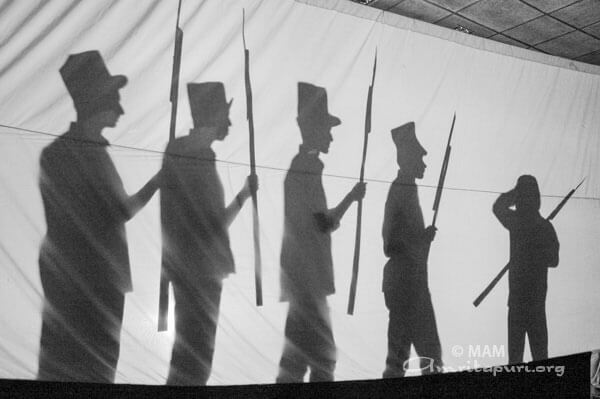 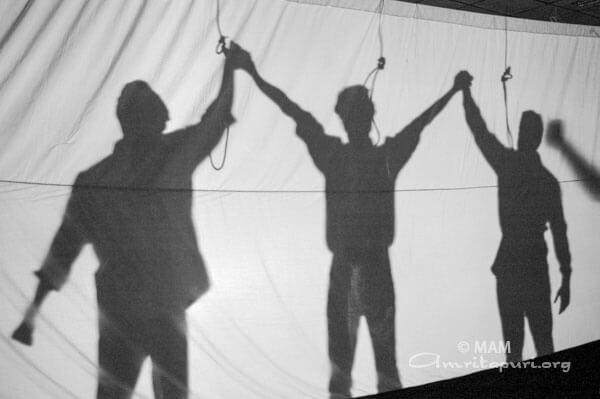 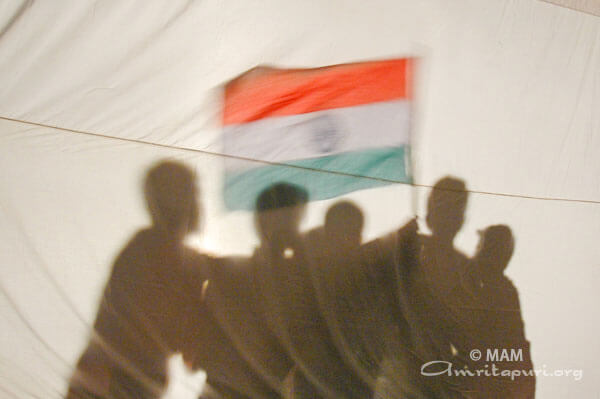 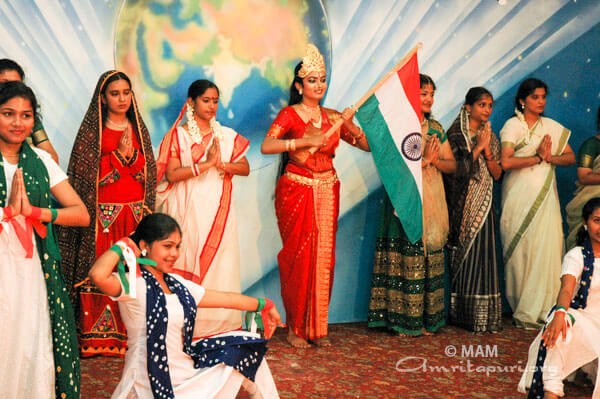 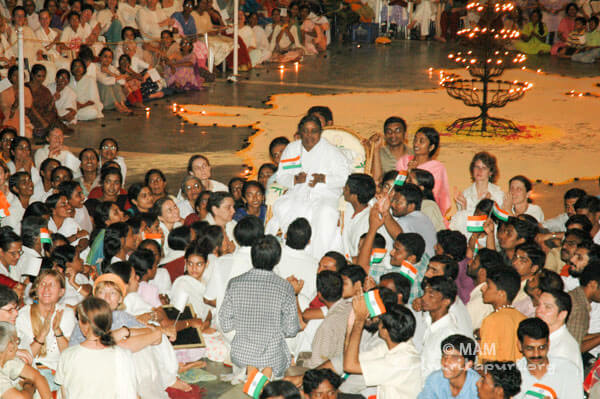