Today, the father of a child enrolled in Amrita vidyalayam —Mangalore came forward for Amma’s darshan; his eyes were filled with tears. It was difficult for him to hold back his emotions. And as soon as he fell into Amma’s arms, he began to tell her his story. 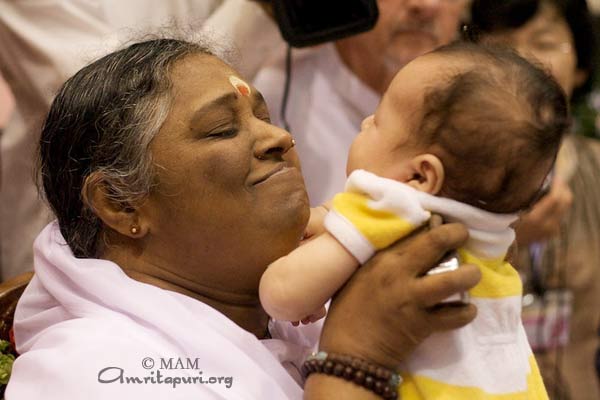 One day last week, he was invited to his son’s school to take part in a programme that all of Amma’s schools have been participating in for several years now. In order to help instill respect and love in children for their parents, the ashram schools organise mass pujas, wherein the children ceremonially wash their parents feet. The traditional puja is based on the verse in the Taittiriya Upanishad that says, “Matru devo bhava, Pitru devo bhava, Acharya devo bhava, Atithi devo bhava,” [Let you be one who worships mother, father, teachers and guests as God.]

The man looked up into Amma’s eyes. “When my son began to wash my feet, I asked myself, ‘Who am I to be worshipped like this? I am not worthy of such a thing.'” He then told Amma that in all his life he had not once touched his parent’s feet, much less perform padapuja to them.

But then, the man told Amma, when he returned home, he felt so inspired from his child’s actions that the next time he saw his own mother he quickly fell at her feet in reverence for all she had done for him throughout his life.

“When I touched my mother’s feet, she couldn’t believe it,” the man said. “Now, for the first time in 36 years I am respecting and loving my mother. Only when I bowed down to her did I come to know her value. My mother then, with love and affection, blessed me, saying, ‘Whatever bad feelings I may have held towards you are nullified by this.'”

The man then thanked Amma profusely for helping to re-establish traditional values in the coming generation. “Amma, you have taught me the greatness of motherhood. I will be indebted to you always. You are the Maha-Taye—the mother of all.”