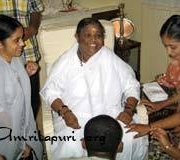 “Newspapers are meant for dharma. And for the purpose of protecting dharma we have to live our dharma,” Amma said. She was talking to 15 students from Amrita Vishwa Vidyapeetham’s School of Journalism who She’d called to Her room after bhajans on 3rd March.

The students had come from the university’s campus in Coimbatore in order to spend the weekend at the Ashram. From the outset, it was the hope of the future journalists to “get their interview,” and many of them asked Amma as much when they went for darshan.

But when they went to Amma’s room, She turned the tables on them. It was Amma who was asking the questions: “Why have you decided to become journalists? What is your idea about this profession? What is the dharma of a journalist? Do you think that you can live up to that dharma?”

Amma explained how journalists face pressures from many directions—specifically those coming from the vested interests of their audience, of their publishers and of themselves.

“In today’s world many newspapers are run by businessmen whose sole aim is to make profits,” Amma said. “You will have tremendous pressure from the management. You will also have to work under numerous constraints while trying to uphold journalistic ethics. But you should learn to tackle all these problems, without compromising on the truth and values.

“You will have to keep your job to maintain your family. But that doesn’t mean that you should forget your fellow human beings; their interests should be given top priority. It’s an uphill task, but it can be accomplished with God’s grace.

“Life is not going to be a bed of roses. You will have to tread thorny paths and face many obstacles. You may even feel confused and lose your sense of direction in the overwhelming darkness. But then, it is a matter of will. You should fight till you establish dharma, even if it means you have to make sacrifices.”

The 45 minutes Amma spent with the students left them thrilled. It was clear they felt Amma was their Sri Krishna, clearing their doubts and calling them on to fight their Kuruksetra. They left feeling invigorated and full of enthusiasm to take up the challenge of their chosen path.

“It was ecstatic,” wrote Anoop Anandhe Jaggal in the March 7th copy of the Campus Beat, the student newspaper. “Amma was talking and we all were sitting around Her. For the first time in life I knew that words can be this powerful. I was charged up. She spoke in such a simple language, but the irony was that I just couldn’t stop thinking about what She said for the whole night. Her simple words were embedded with eternal concepts.”

“It was as if She knew exactly what we wanted to know from Her,” wrote Soyesh H. Rawther.

As part of their education, Amma urged the students to visit rural Indian and get a feel of the life there, to understand the plight of the country’s poor. She also spoke to them about the deterioration of values in Indian society, and while agreeing that there were things worth imbibing from the West—such as the strong work-ethic and self-sufficiency of the people—there were many aspects to its culture that simply do not fit India. “We Indians only imbibe what the Westerners dump, while they always take only the good from our culture,” Amma lamented.

It seems that every few months Amma is talking with another group of students, either calling them to the bhajan-hall stage or to Her room. But no matter what discipline the students are studying—medicine, computers, journalism—they always report being so inspired by Amma’s satsang. Amma founded Amrita University not only to create professionals, but professional human beings,professionals with a heart and a strong sense of dharma.

In today’s world it is the journalists who spark the minds of the people. Now Amma is sparking the minds of the young journalists, stoking a fire fuelled by truth and dharma.  Perhaps the sentiments of Radha R. Menon, in her article for Campus Beat, show best the potential inherent in Amma’s spark: “Just as Amma says, fulfilling our dharma is most important. I hope to fulfil my dharma fruitfully. After all we have a short life and we have so much to do.”

Parts of this article were culled from those appearing in Campus Beats, a paper written and published by students of the Amrita School of Journalism in Coimbatore. 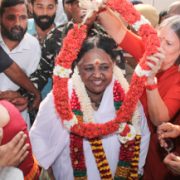 Perform right action and free from worry: Amma in Kovai 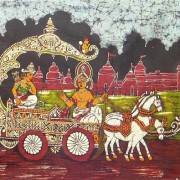 Gita Jayanti and the Bhagavad Gita 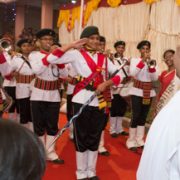 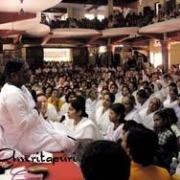 An eagle comes for Amma’s bhajan
Scroll to top