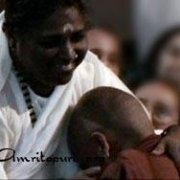 Around the time Amma left for Sri Lanka, a Buddhist monk from the island country came to stay for a while in Amritapuri. He had heard a lot about Amma and, as he was spending some time in India, had decided to come to Her Ashram.

After Amma returned from Sri Lanka, some ashramites working on a video of Amma’s trip to the country needed help translating some words from Sinhalese, one of the languages spoken there. They approached him and he agreed.

He told them that he was part of a group of ascetic Sri Lankan Buddhists who hardly ever leave the forests. When he fist came to the Ashram, he was a bit confused as to how to go for Amma’s darshan, as he worried that being embraced by Amma would violate his vow to not have physical contact with a woman. In the end, he decided that he would go to Amma with the attitude of a patient seeing a doctor. He had Amma’s darshan and felt that Amma was a great soul.

He watched the video clips of Amma giving darshan to the tsunami victims in Ampara and Hambantota, some of the hardest-hit areas in Sri Lanka. He saw Amma giving darshan to the Tamilian Tigers and the Sinhalese Lions—two groups that have been engaged in a brutal civil war for more than 20 years. As he did so, tears welled up in eyes and rolled down his cheeks. He said that he was overwhelmed that Amma, a native of India, had gone to Sri Lanka, another country, to comfort the people there.

Suddenly he realised that he had to leave in a few hours to catch his train. Wiping his tears, he hurried and went for Amma’s darshan one last time.

As he was leaving, he said that Amma had rekindled his spirit. He had been a recluse and solitary, but now he felt he should go into the world and live his life as a sacrifice for others. 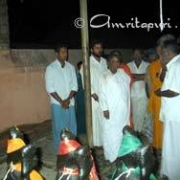 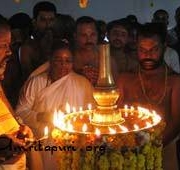 People move into the temporary shelters 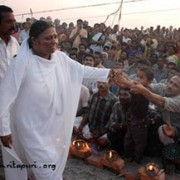