From the big city of Chennai, to the smaller, former French enclave of Pondicherry, to the even smaller town of Karur, traveling with Amma provides a truly cosmopolitan view of India. There is the continual shifting of surroundings, the never-ending flux of the multitudes from every conceivable walk of life, and the ever-new circumstances and situations to adapt to!! it can all be a very intense experience, even overwhelming for some. But, Amma never flinches, or even slows down. She remains the same supremely steady Amma throughout – never changing, never wavering even a bit, ever established in a perfect equanimity and peace. Her smile, Her radiance, Her total selflessness is the constant around which all of these other variables revolve. 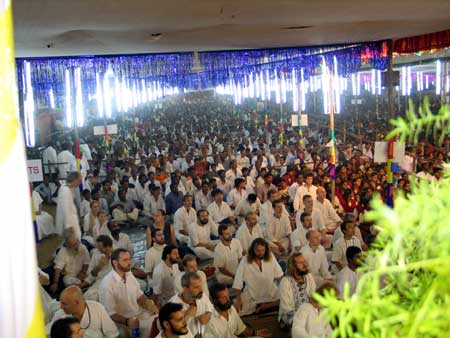 The crowds are always huge and a mixture of people, but each tour stop has a characteristic that stands out. Chennai, being a large, upwardly mobile international city, naturally has a high concentration of the affluent and influential; Pondicherry, though a more relaxed town, still had an unexpectedly large turnout, with a larger than average percentage of westerners attending due to its foreign and expatriate population; Karur on the other hand is smaller and more impoverished, and the crowd here consisted almost exclusively of very poor villagers.

Amma and the tour group were accommodated at the Sri Sarada Niketan Women’s College, for which Amma laid the foundation stone 18 years ago. This is Amma’s first return to what has become a beautiful campus. As the buses pulled in, we were greeted with a sign quoting Sri Sarada Devi: “Pure, loving devotion can win everything.” The grounds of the college are very beautiful, with the many buildings constructed in a traditional Tamil architecture style?? and pink like Amritapuri!

In the college’s large prayer hall was an altar with a large photo of Amma, centrally erected amidst photos of Sri Ramakrishna, Sri Sarada Devi, Swami Vivekananda, and about 50 paintings of Hindu deities adorning the walls. Local students had delicately decorated it with tiny pearls covering Amma’s white sari and colored beads overlapping Amma’s nose ring and malas. Many among the tour group found this hall a favourite sanctuary for prayer and meditation.

A few kilometers away at the program site, held at the Vivekananda Higher Secondary School, the crowds swelled to massive proportions. They consisted almost entirely of poor local villagers, all eager for their turn in Amma’s arms. There were three huge portraits of Sri Ramakrishna, Swami Vivekananda and Sharada Devi surrounded by two big portraits of Amma creating the backdrop of the stage. 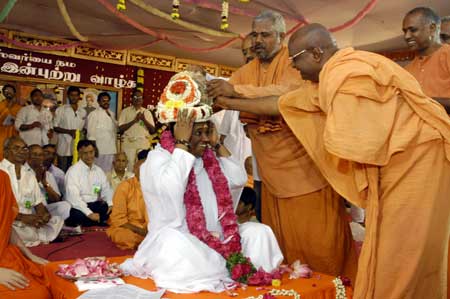 The Ramakrishna Ashram in Karur is run by Swami Atmananda, a direct disciple of the famous Swami Chidbhavananda, who is highly respected in India for his commentary on the Bhagavad-Gita. While welcoming Amma, Swami Atmananda had added, “Some may feel that they are not blessed because they were not fortunate enough to see Sri Ramakrishna Paramahamsa Sharada Devi or Swami Vivekananda. But, we can see all three of them in Amma!”

At one point late into the program, Amma called all of those with high darshan token numbers, who would otherwise have to wait many more hours for their darshan turn, to come sit on the stage near Amma in rotating groups. Amma also invited them to queue in the prasad line, where they were able to spend a few moments each handing prasad directly into Amma’s hand, as She hugged the endless lines of devotees. Many seemed almost perplexed at their good fortune. The students from the Sri Sarada Niketan were also given this chance, and double rows of purple, green and pink saris, the colours denoting student and staff, could be seen winding off the stage and far out onto the grounds.

At 9:38 am, Amma stood after having hugged 40,000 of Her Karur children since coming to the stage at 6:30 the previous evening. Even after standing, Amma couldn’t resist the many outstretched hands of those of Her children below who had just begun arriving, all reaching longingly for their Amma. She stood at the edge of the stage for many more minutes passing out prasad to as many as possible. Amma even blessed three boxes full of prasad, to be distributed amongst all who had just come and didn’t receive a hug. 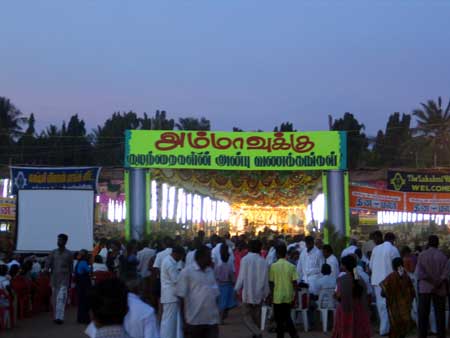 Over 3,000 students of the school had also begun arriving for class, and were amazed and excited at the crowds and festive atmosphere. As the crowds encircled Amma’s travel camper for one last glimpse of their beloved, Amma made Her way into its doorway, and lingered there, seeming to hesitate leaving Her children. Even though Amma was inside and the door was ready to be closed, Amma kept pushing it back open, to give another loving glance.

The school’s students lined Amma’s path as She drove out of the grounds, holding their palms together in reverent salutation before Amma. Sitting in the front seat, Amma lovingly gazed out through the windshield at them all as She was slowly driven out.