Om Lokah Samastah Sukhino Bhavantu. This is the prayer that is chanted in Amritapuri, and by Amma’s devotees around the world, as the clock strikes midnight each New Year’s Day. The collective effect of many thousands one-pointedly chanting this powerful prayer for the peace and happiness of all beings everywhere serves to help purify the atmosphere, contributing positive vibrations to a world all too accustomed to its own negativity. 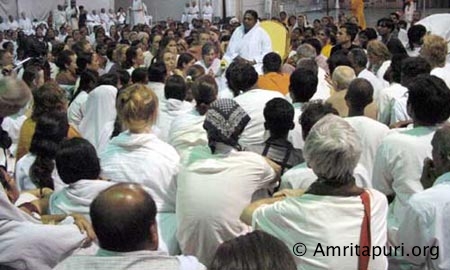 The ashram residents and visitors sat chanting the sacred mantra around Amma’s chair in the large hall, and Amma joined them just before midnight. Then, leading the prayer while the world entered the new year, Amma gave us the priceless blessing of inaugurating this year in a most auspicious way — by praying for the welfare of others.

Amma was quick to remind us, however, that although the numbers of the year are changing, if we don’t change internally, then there is no real meaning in saying it’s a ‘new’ year. Amma said that the real change has to take place within us, by uprooting our latent negativities and cultivating positive qualities. This in turn will have the natural effect of changing the world for the better.

Amma asked Her children to offer their thoughts on how we can contribute to the upliftment of the world in this New Year. Many heartfelt responses were given, but most shared a common element: that we all strive to practice Amma’s teachings on Love, Compassion and Selflessness, as this is the surest way to peace and happiness for all. One devotee asked that we all be as willing to serve each other as we are to serve Amma, and another added to this saying that his wish is to learn to see Amma in all, so that he doesn’t have to always come to Amritapuri for Amma’s darshan!

Many devotees shared touching personal stories. One person from Mumbai told how he had been meaning to come see Amma for many years, but never did. He had planned to spend this New Year as always with friends, but at the last minute had an insight into the meaningless of that type of ‘ happiness’ and felt a deep urge to seek the source of true peace. So, he immediately caught a train and came to Amritapuri to see Amma — without luggage or even changing his clothes!

Another devotee from Calcutta drew laughs and applause as he took the mic, saying, “I’m sorry, but I’ll be taking up a lot of Amma’s time now, because the chance to speak directly to Amma in this way is a once in a lifetime opportunity.” He told how his family had been trying to get him to meet Amma for a long time, but he persistently declared to them that, ‘That’s your thing, not mine!” But, this past year when Amma visited his family’s home, they finally persuaded him to at least come just to see Amma. He hesitantly agreed, but said that when Amma stepped out of the car and Her eyes met his, he felt a deep surge of love and ended up staying for the whole three days that Amma was there, unable to tear himself away! Now, he said, he had the great blessing of speaking directly with Amma, and tearfully pleaded, “Amma, never leave this child alone! Always be with me, Amma!”

One devotee said that she thought the quickest way toward world peace was for more people to meet Amma, and a young girl approached and explained that this was her first time meeting Amma, saying it was a major turning point for her and she was now dedicated to the spiritual life. Another young girl who had just met Amma for the first time this day came up and spoke a few words, taking the mic nervously. She said that before today, she was too shy even to speak to two people at once… and now she was addressing Amma and a crowd of hundreds! She said that she didn’t know how she was able to, and that it was Amma’s grace that gave her the courage. Her mother then spoke, saying that she was so happy to see her daughter speaking so confidently, and attributed it to her faith in Amma. She prayed that this faith and devotion last forever in her daughter’s heart.

One of Amma’s engineering college student said that he made so many mistakes in the past year, and prayed that he may not repeat them. Amma really liked this simple but wise answer and clapped happily. Two other devotees spontaneously offered songs to Amma, and many others offered tearful expressions of gratitude, one after another declaring that it is by living the life that Amma is teaching that we can find true lasting peace and happiness. After listening to all of Her children, Amma enjoined everyone to chant the Mahishasuramardini slokas to the great Goddess of protection, Durga.

In Amma’s New Year message, Amma called upon us to pray for suffering humanity, particularly the victims of the recent devastating earthquake in Iran. Amma said that we should send our heartfelt prayers to the survivors, that their wounds, inner as well as outer, be healed quickly, and for those that have passed on, that their souls may rest in peace.

With such intimate guidance from a great spiritual Master like Amma, we have only to listen to Her words with our heart and live Her words with a simple faith. Then will each moment be new, all bliss be ours, and an enduring peace be upon the earth.

Happy New Year to all of Amma’s children, from Amritapuri!