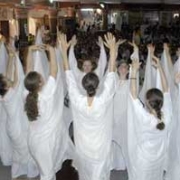 Amma has said, “The Lord comes not once a year, but every moment. This Christmas Eve saw Amma, as in every moment, immersed in the spirit of giving … darshan. While She was doing so, some devotees began decorating a tree that lives in the garden in front of Amma’s house. When Amma finally came out of the temple it was night, and this tree had been transformed into a Christmas tree, lovingly draped in paper garlands, colourful Christmas lights and crowned with a star.

Towards the end of darshan, a lady devotee came to Amma and complained that her sandals had been ?tolen’ from in front of the temple . Amma then sent a brahmachari to find a plastic bag. When it was brought, Amma tried to fit a pair of sandals into the bag, but the bag was too small, and She made the brahmachari go find a larger bag. He returned with a new bag, and this time the sandals fit perfectly.

Amma then said that from now on, plastic bags should be given for devotees to put their footwear in, which they can then keep with them in their shoulder bags, thereby improving the situation in three ways; it will prevent them from being stolen or misplaced; there will no longer be any need for two people to guard the shoe-rack, saving that much man-power for other work; and finally there will no longer be any need for a shoe-rack at all, saving that much space for something more important!

Thus, as many mothers around the world were spending Christmas Eve wrapping gifts for their children, our Divine Mother, with characteristic humility, was busy wrapping our sandals, even while wrapping us in Her arms… the symbolism of all this is almost too poignant …

India has always welcomed other faiths, and Kerala in particular is said to have been home to some of the earliest Christians, and preserves India’s largest Christian population to this day. Christmas is always an extra special day for both western and Indian Christians to receive darshan from Amma. Many consider Amma to be an embodiment of the same divinity that was born as Jesus Christ.

Amma’s children offered a Christmas performance while Amma gave darshan. There was a lively electronic keyboard performance, adding to the jovial atmosphere; an operatic serenade by one of the ashram residents, who is a professionally trained opera singer; and dances by both western and Indian children.

Children from one of Amma’s orphanages presented traditional Indian dances in full costume, their innocence endearing themselves to one and all. Later, some of Amma’s western children also offered a simple and elegant dance. All of the performances received a hearty applause by Amma Herself, who would pause the darshan line just long enough to clap and smile with approval and happiness.

In Amma’s Amritapuri ashram, all religions and their essential teachings are respected and supported. Amma truly honours all spiritual traditions in the most direct and meaningful way ” by encouraging the followers each to go deeper into their own faith, and become embodiments of the universal divine qualities that all religions hold sacred. Love, compassion, peace, wisdom, selflessness – these qualities all lie within us, and are in fact our true nature.

Amma has often said that many are prepared to die for their religion, but few are prepared to live by its principles. Amma is patiently guiding us all to the living Truth common to all spiritual traditions, and in so doing, to an everlasting Unity, for Truth is One …

And, as embodiments of this Truth, we are One. 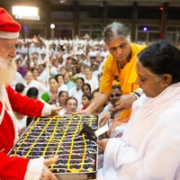 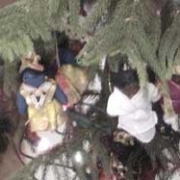 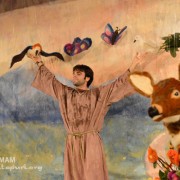 May the Christ take birth in your heart

Another New Year with Amma
Scroll to top