Inspired by Amma’s example, our volunteers working out of Barcelona, Spain have been running an outreach program with the nearby Quatre Camins prison for the past three years. The outreach is led by social worker Amparo Saavedra, who says that she wanted to find ways to incorporate everything she has learned from Amma about peace and love for the last 15 years into her work at Quatre Camins. Three years ago, Amparo asked Amma to bring meditation to the prison. Amma sent volunteer meditation instructors Cristina Rodriguez and Marta Griso, who have been visiting the prison and conducting classes and Amma’s IAM Meditation technique regularly ever since. The feedback from the prisoners is that the meditation is making a big impact on their lives—they credit the practice with helping to clear their minds and soothe their hearts. But meditation is not for everyone. That’s why 18 months ago, our volunteers started a garden at the prison called “Amma’s Garden” where the more action-oriented prisoners can learn to grow their own vegetables and enjoy being in nature. A number of the prisoners also spend two Sundays a month engaged in service activities at the Amma Center of Spain.

Finally, the prisoners are fundraising to help children with cancer. They raise money by making and selling bracelets and also by collecting bottle caps, which are sold to the recycling center. The prisoners have placed collection points in key locations throughout the prison, and over time have gotten all the prisoners in the habit of saving their bottle caps and dropping them in the collection points. The friends and families of the prisoners, and even the prison social workers and some of the other prison staff also bring their bottle caps from home and drop them in the collection points. One beautiful thing that has come out of this practice is that many different groups of prisoners within the prison are committed to collecting the caps. This has created a bridge between groups that would otherwise not have any common ground. The cap collection program was designed to engage the majority of the prison population, to create an easy positive practice for those who might not be receptive to more structured or involved service activities. When they hear that they can help children with cancer just by changing the place they put their used bottle caps, they easily agree. One of our volunteers explained that these things are like a small point of light for the prisoners, a simple and achievable act of compassion that opens their hearts and bring positive change into other parts of their lives as well.

Help children with cancer just by changing the place they put their used bottle caps, they easily agree.

During Amma’s most recent visit to Granollers, Spain, ten prisoners who have been participating in Embracing the World’s programs at the Quatre Camins prison received permission to spend the day at Amma’s program, doing service in support of the program and getting the opportunity to meet Amma personally. Upon receiving Amma’s embrace, one prisoner commented on how Amma received everyone, regardless of how they look. He felt that Amma only saw the goodness of his heart, describing Amma’s embrace as a priceless experience that opened his heart. Another commented that there are no words to describe Amma, stating that you have to experience her presence to understand it. Another stated that Amma can change the hate and war in the world through her infinite love, and that the greatest lesson he has learned from Amma is that you should hug more, and express your feelings more. 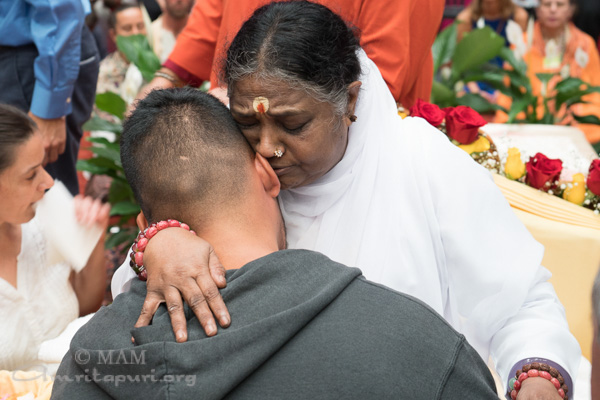 Moving forward, our volunteers plan to create a program to help newly released prisoners integrate back into society with support. For many, leaving prison can be a very difficult experience. Without the amenities and support of the prison, it can be very difficult to integrate back into society. The volunteers are working to expand the meditation courses for newly released prisoners as well.

About the work of the volunteers at the Quatre Camins prison, Amma commented, “Amma is very, very happy that her daughters go out into the world to serve. When we die, the body rots and the only thing left is what we have done for others. It is like planting a flower or a tree in the desert. At least that much beauty or shade it will bring to the desert. Amma is very happy with her daughters.”

On the day they came to see Amma, the prisoners also brought a poem they had written for Amma, as well as a beautiful wooden altar carved by one of the inmates. The poem read:

Amma, you heard your children cry out,
Our hearts torn between good and bad,
Crushed under the terrible weight of hatred,
Until you arrived.

You, with your loving hugs filling us with love,
A love called freedom.
Freedom for those enclosed within prisons of brick,
we also are prisoners imprisoned within our own minds.

Inside our hearts with your gentle gaze
You summoned up an Ashram of serene protection,
and from that moment on,
we have been happily distracted.

Travelling with you through your world of compassion
is a dream come true, a serene refuge,
At your side we feel fulfilled.