Amma is here at Granollers for the first tour stop in her Europe Yatra 2015. A few hours ago, several devotees had gathered at the airport and were looking for Amma ever since they knew her flight had landed. Suddenly among the crowd, a spotless white saree and a beamingly smiling face. Amma was in Europe and her tour had started. To many who had arrived, Amma gave Darshan as she walked out of arrivals. Even from within a car, Amma put her hand out to hold each and everyone and squeezed them gently like as if we were small children yearning to be in her grasp. Amma’s car left El Prat airport to Granollers, a town on the outskirts of Barcelona, a venue Amma had been visiting past few years. 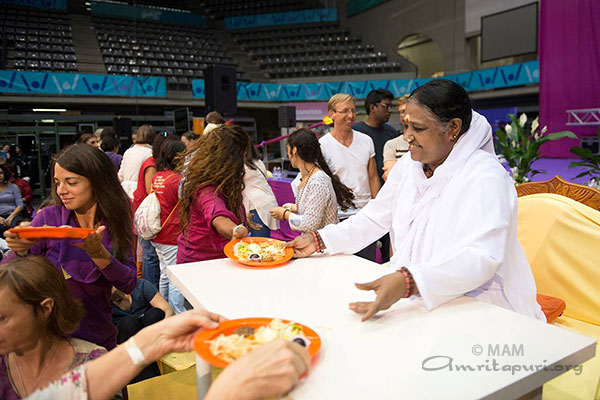 It was a celebratory mood at the hall. Sleepy, yet conciously active, many were setting up the hall and stalls. Music team hanging the setups, stage folks re-carpeting the floors, stalls and table covers everywhere, inch by inch was being setup. A good number of volunteers were helping all the happenings. At 9pm, Amma came out unrested but fresh and led a beautiful meditation session. She asked for everyone to pray for world peace and for Nature’s harmony to be restored. She concluded by chanting “Lokah Samastah Sukhino Bhavantu” 9 times. As always and setting an example, Amma had folded hands as she led everyone on the universal prayer for peace.

Amma then called for food and distributed pasta and salad to one and all present. As she finished serving, she asked if everyone received and even asked extra plates to be circulated for seconds. She asked for hot chai to all volunteers and everyone present. 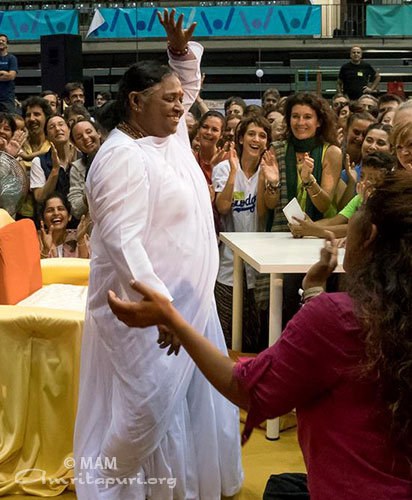 As everyone’s stomach filled, Amma started singing “Azhagu Azhagu”, a Tamil bhajan on the beauty of the Divine Mother. Afterwards Amma asked for a Baduga song to be played and She danced sitting down swaying her hands and body in a delicate yet graceful moves of the Badugas. As she started walking back to the room, Amma stopped on the way to dance, swaying blissfully in an enthralling disposition. Amma’s tour had just started with hearts dancing, minds overwhelmed in joy glorified by this touch of Life.