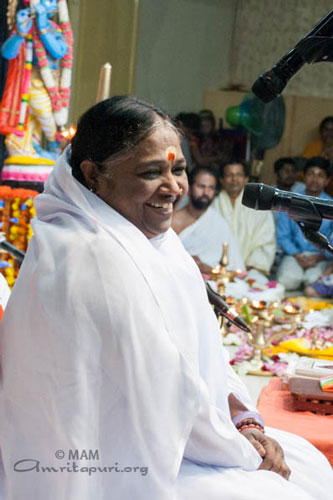 At the mere thought of Lord Sri Krishna, we feel an overwhelming joy arise within us. Even though it has been 5,000 years since the Lord incarnated on earth, his presence continues to shine in the culture and everyday life of the people of our land. The magnetism of the Lord’s leelas and the relevance of his teachings have not diminished with time. Through his life, Sri Krishna revealed the infinite power of the universe in all its completeness. This is the reason we hail him as a purna avatara—a full incarnation.

The literal meaning of the name Krishna is “he who ploughs.” The Lord is he who uproots the weeds of impurities from the human mind. Another meaning of for Krishna is “he who attracts all.” Krishna drew to himself not just the gopis, but all of humankind, as well as the birds, mammals, plants, trees, stones, thorns and everything else in nature.

At the sacred fire ritual of the Rajasuya Yajna, Lord Krishna—being the chosen deity—received the worship of all the assembled kings. Later, at the ensuing feast, he showed no hesitation in clearing the soiled leaf-plates of those who had eaten. Even when he was falsely accused by his own subjects of stealing the precious Syamantaka gemstone, he remained calm and eventually proved the truth. He alternated between different roles seamlessly, with the deftness of a seasoned actor, yet never lost site of his true nature.

Whatever was his dharma at the present moment he carried that out without letting personal pride, happiness, shyness or difficulty obstruct him. 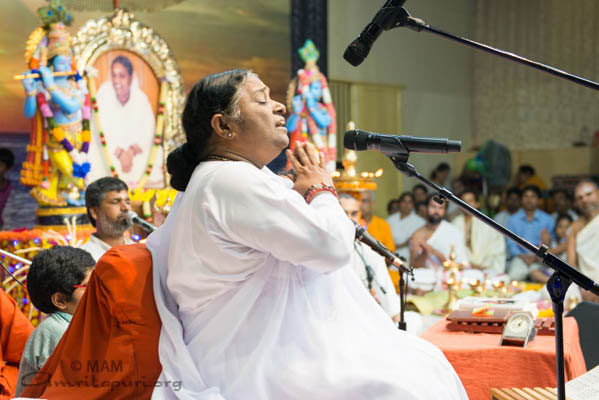 Have vision, turn inward, Truth will shine within

In reality, we are not separate from the Lord. He is our own essential nature. We see the whole world with our eyes, yet we cannot see our own eyes. Such is our current state. If we can make our vision, which is currently focused on the external world, turn inward, then that Supreme Truth will shine forth within us. Otherwise, we will continue searching for happiness and peace in the external world like the musk deer that blindly pursues the smell of musk, not realizing that the fragrance is coming from its own body.

For the Vedantin, the Lord is the perfect role model. To understand practical Vedanta, one should study the life of Lord Krishna. He did not seek any anything for himself. Whatever others needed, he gave. He loved everyone, but was attached to no one.

Some may ask, “Why do we need to love the Lord, who is not attached to anyone?” The Lord did not see anyone as different from him. That is what he revealed to Arjuna through the vision of his cosmic form—that he is in everyone and everything and everyone is in him. Attachment comes only when you see the other person as different from you. The reason he was not attached to anything is because in his worldview there was nothing other than him.

The greatest message the Lord gave the world was his never-diminishing smile. Whether it was when the he incarnated on earth, when he taught the Gita, or when he watched his own Yadava clan fight and destroy themselves, his smile never wavered. His smile was the smile that rises from mental equanimity.

Equanimity of mind is being able to face opposite circumstances with the same attitude. External circumstances will keep changing. Fortune and hardship will also alternate. We should consciously cultivate the attitude of total acceptance with regards to everything. If we can do that, then peace and joy will always be there in our life.

The Mahabharata and the Bhagavatam present so many challenging incidents that took place in Krishna’s life. Regardless, the smile never faded from his face. Our lives are like the pendulum of a clock; they constantly swing from hardship to fortune, and fortune to hardship. When the pendulum swings to one side, it doesn’t remain there for long. It is just gaining enough momentum to swing back the other. Keeping this in mind, when we experience fortune or comfort in life, we must remember that it is only momentary. Hardships will soon return. We need to bring the pendulum of our lives to a standstill—a point of equilibrium. When we understand the scriptures, we will be able to keep ourselves in this point of equilibrium, like the needle of a balanced scale.

The manifestation of an avatara is like the full moon rising on a new-moon night. Their beauty and influence an avatara has upon the world is beyond comparison. All planes of human life are touched and nourished by their presence. We see this in all fullness in Lord Krishna. The avatara of Lord Krishna was ordinary, yet extraordinary. He was human, yet divine. He was completeness itself.

From the moment that he was born into Kamsa’s prison, to the moment he was killed by the hunter’s arrow, every action Krishna performed was sweet, attractive and aimed at cleaning the human world of its impurities. The prison that the Lord was born into symbolizes the prison of desires that is currently binding our hearts. If we cultivate awareness of the Lord’s presence in our heart, we will be able to release ourselves from all the bonds that imprison us. May the baby Krishna forever play in our hearts. May the wisdom of his words continue to enlighten our path every day.

The above is extracted from Amma’s 2015 Krishna Jayanti message.