Madurai is famous for an exquisitely designed, sculpture-covered, dramatically high-rising (in the traditional Tamil Nadu style) Meenakshi Temple. The Devi there is clad in green, and whenever Mother is in Madurai, this Devi is honoured on the night of Her final programs. First, when the four-sided murthi (holy image) in the Brahmasthanam temple at the ashram is decorated for the Shani Puja, the face depicting Devi is always dressed in green, and her crown is a replica of the crown of the Meenakshi Devi. (In fact, when Mother installed this temple in 1995, the Meenakshi Temple sent their Devi’s crown itself to grace this side of the murthi). After the puja, Mother begins Devi Bhava-and though in other parts of the world She might be clad in red or gold or cream or white or blue-in Madurai, it is always green. In this way, Mother is honouring the local people’s devotion to Meenakshi. 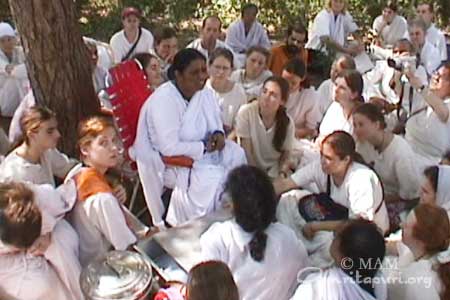 One must be a Hindu to enter the Meenakshi Temple. This year many of Mother’s western devotees who are following the tour wanted to visit the temple; those who have adopted Hinduism as their path dressed in conservative Indian clothing, wore traditional marks of vibhuti or kumkum on their foreheads, and were escorted into the premises by an Indian devotee. It was an unusual and impressive experience for Mother’s children, to enter this venerable edifice.

At a roadside lunch stop, Mother, sitting surrounded by all the Indian and foreign devotees travelling with Her, looked out over the crowd and asked: “Meenakshi?” At first, no one seemed to understand. She continued, “Temple going?” “Yes, yes,” came the enthusiastic responses of those who had visited the temple. “Very nice building,” Mother offered. A voice from the back of the crowd said, “Yes, but Meenakshi was giving darshan back at the ashram!” And everyone laughed. Some reflected, and felt blessed.