Imagine this: The gentleman is highly respected in his community, wealthy, the owner and operator of a major local industry. He is also a devotee of Amma. Ten days before her scheduled programmes in his city, he closes his factory and sends all his employees to the ashram to help prepare the premises. The work ranges from running errands to cleaning rubble, from repairing masonry and plumbing to raising bamboo and tarpaulin sun and rain shelters, from organising lists to setting up kitchens. Everybody works, full-time, every day.

Mother arrives; the programmes proceed. Every morning the gentleman is in attendance, and all day long he can be seen, sometimes doing seva, sometimes simply enjoying Mother’s presence. Every night, he is there until Mother finishes darshan – maybe three or four in the morning.

Then, of course, he can go home to the luxury of his well-appointed residence, have a hot bath, sleep comfortably, and return refreshed. But no. “I don’t need anything,” he says, modestly wrapping himself in a sheet and lying out in the open of the ashram grounds.

How often Mother has said to her children, “You don’t have to give up the world, leave everything, and go live in a cave to be spiritual.” Detachment doesn’t mean having nothing; it means being free of what you have. Not controlled by it; not wanting it.

A Madurai wealthy man can be a model of detachment. 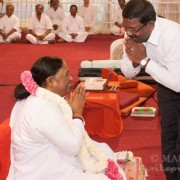 Selfless Service is the Pongal that reaches Amma 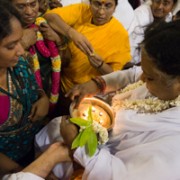 It's natural to make mistakes: Amma in Madurai 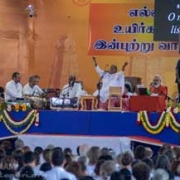 Amma has come to bless every living being in Madurai 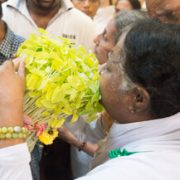 Permanent bliss is what everyone is searching for: Amma in Madurai 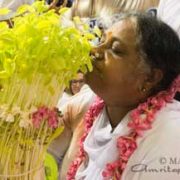 God is the indivisible oneness, devoid of all boundaries: Amma in Madurai

Embrace with eyes and arms at Madurai