The town of Kovai (also known as “Coimbatore”) is situated at the base of the Nilgiri Hills on the western boarder of Tamil Nadu. It is centred around an ancient temple dedicated to Koni Amman. From the name of this goddess alone the name “Kovai” evolve.

Coimbatore District, in general, is very rich in temples and, of course, the stories surrounding them. Here are but a few: 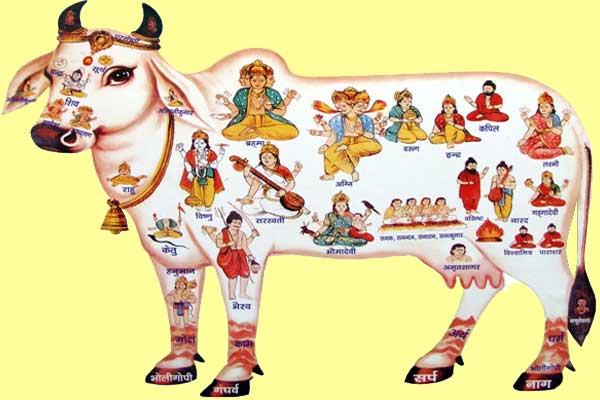 According to the Puranas, two of Lord Shiva’s most precise gifts to humanity were Kamadhenu and the Kalpataru—a wish-fulfilling cow and tree, respectively. For ages, these two miracles of the Lord would bestow upon anyone anything they wanted. Eventually, however, Kamadhenu grew tired of people constantly asking her to fulfil their worldly desires, and she asked the Lord if he would permit her to retire. Lord Shiva agreed and told Kamadhenu that in her next birth she would be born as an ordinary cow and that he would come to her personally to bestow liberation upon her.

In her next birth, Kamadhenu bore a calf. One day the two of them were grazing in a forest in Perur (about 10 km from Kovai). As Kamadhenu’s calf frolicked about, its legs struck an anthill and it became stuck. The calf began crying, and Kamadhenu came running to free her child. But being an ordinary cow, there was nothing she could really do. Finally, out of desperation, Kamadhenu drove her horns down into the anthill. When she raised her head, one horn was covered with blood. Kamadhenu immediately realised that this was not an ordinary anthill but, in fact, was storing her Lord in the form of a Shiva Lingam1. In reverence, she immediately expressed her milk over the anthill, thus performing an abhishekham2. Lord Shiva, then appeared before Kamadhenu and, as promised, bestowed her with liberation.

After some time, a temple was erected around this Shiva Lingam. Today that temple is known as Perur Patteshwarar. And if one looks at the Shiva Lingam, one can still see where it was pierced by Kamadhenu’s horn.

It is also said that two Tamil saints attained liberation in Perur, and this is eternally reflected by Mother Nature in that palm trees grown in the area have abnormally long lives and, on the converse, tamarind will not sprout there3. This is symbolic of how the saints transcended samsara, the cycle of birth and death.

Another story that took place in Perur involves Sundara Murti Nayanar, one of the 63 Nayanars [Shivite Saints of Tamil Nadu]. The story goes that Sundara Murti Nayanar would regularly travel to Perur to visit Lord Shiva. As per the divine play of this Saint, each time he met Lord Shiva there, he would only ask him for material things—gold and jewellery, etc. Finally, Lord Shiva wanted to teach the Nayanar a lesson. So he left his abode, and told Nandi, his devoted bull, that the next time the Nayanar came looking for him that he should not tell him that he and his consort, Goddess Parvati, had gone out.  But when the Nayanar came, Nandi did not feel he could completely lie to him. On the other hand, neither could he disobey his Lord. Therefore, when the Saint asked where Shiva and Parvati were, Nandi simply turned his head, looking back over his shoulder. From this, the Saint was able to infer that the divine couple indeed had left and were somewhere behind him. He immediately set off to find them.

In fact, Shiva and Parvati had assumed the guise of two farm hands and had spent the entire day working in a nearby field. When Sundara Murti Nayanar came across them, they were in the process of supplicating to the farm owner for their day’s wages. Seeing his Lord supplicating to a farmer for money was too much for the saint. He quickly approached Lord Shiva and asked him what he was doing. Shiva told him that as he did not have any money he was doing his best to obtain some. Although Sundara Murti Nayanar was shaken, he was not completely freed from his obsession with money. And when he took leave from the Lord, he once again asked him for riches. At this point Lord Shiva spoke frankly, “My son, do you want my money or my grace?” Finally, the Nayanar realized that he had been a fool to ask the Lord for something as trivial and perishable as money. He immediately fell to his knees and asked him for grace and grace alone.

There is another name for Perur, and that is “Mela Chidambaram” [“Upper Chidambaram”]. Located approximately 250 kilometres southeast of Coimbatore, Chidambaram is home to a one of India’s most famous temples. In fact, the temple’s original idol is not even an idol as such, but Akasha Deva—space itself. Therefore, when one enters the temple grounds, they are said to verily be entering God. The legend goes that two saints—Patanjali and Vyaghrapadar—were performing austerities in Chidambaram. Pleased by their devotion, Lord Shiva spoke offered them a boon. They requested him to reveal himself to them. Lord Shiva told them that he was in fact pervading everything they saw in the form of consciousness. But the saints were not happy with this answer. They told Shiva that while they knew what he said was true, they still wanted to see him in a human form. The Lord agreed and immediately manifested as Nataraja, the King of Dance. Then, the Lord began to dance, and when the Lord’s heel struck the ground, a piece from one of his chilankas [belled anklets] broke off and went flying. It landed 250 km away in Perur—thus giving the town its second name.

One final legend from Coimbatore District surrounds the Avinashi Lingeswarar Temple (about 30 km from the town of Kovai). This story also involves Sundara Murti Nayanar.

Once, when the Nayanar was passing through Avinashi, he heard two discordant sounds coming from opposite houses—one reflecting joy and the other, sorrow. It seemed that three years earlier, two boys of the same age were bathing in a nearby water tank when one of them was devoured by a crocodile. The boys were five years old at the time. On that day, they both would have been eight. As such it was time for their upanayanam samskara [sacred-thread ceremony]—hence, the joy in the house of the living boy and the anguish in the house of the dead boy.

Sundara Murti Nayanar was extremely moved by the sorrow of the dead boy’s parents. Therefore, he spontaneously broke out into a prayerful song to Lord Shiva, begging him to resurrect the dead child. His prayer was answered. Rain clouds quickly gathered and poured forth, filling the empty tank with water. Soon, the tank overflowed, expelling the infamous crocodile. The croc then regurgitated the child—an unharmed eight-year-old boy.

The story is further reflected by the name of a nearby Coimbatore town—Karuvalur. “Karuvalur” means “raincloud” in Tamil. It is said that when Sundara Murti Nayanar prayed for the boy’s resurrection, that the clouds formed over this town. Hence its name.

1 An obelisk-shaped abstract representation of Lord Shiva, often black and made of stone.

2 Ritualistic bathing of an idol or divine image as a form or worship.

3 Normally, all one has to do is to drop tamarind seed on the ground and within a few days it will sprout.